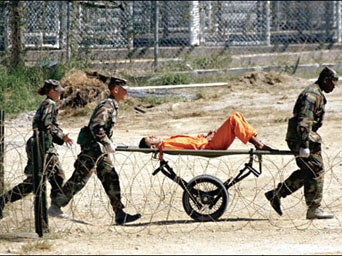 Torture is defined as anguish of body or mind or something that causes agony or pain and only those without a functioning Conscience can inflict it upon any other human or any creature.

WHO: Bradley Manning, the army private accused of leaking classified information to Wikileaks, after close to 600 days of incarceration finally appeared in a military court on December 16, 2011. As this Article 32 hearing proceeded, the defense seemed limited by the choice of the judicial officer who conducted the legal matter and the number of witnesses allowed to be called. If indeed Manning released the documents, he is a hero for blowing the whistle on U.S. war crimes and government alliances with despotic regimes in the Middle East and elsewhere.

The Pledge of Resistance-Baltimore, the Bradley Manning Support Network and other organizations first protested the private’s severe mistreatment while he was in the Quantico Marine Base brig in Virginia. And organized efforts to Free Bradley Manning are continuing.

WHAT: On March 20, 2011, for example, thirty three activists, including Daniel Ellsberg who released the Pentagon Papers, Col. [Ret.] Ann Wright, and Max Obuszewski with the Baltimore Pledge were arrested outside the entrance to the Quantico Marine Base in Triangle, Virginia. The arrests took place on Route 1 after a rally condemning the torture of Pfc. Bradley Manning, an alleged whistleblower, then imprisoned in the Quantico brig. He was kept in solitary confinement for 23 hours a day at that time for a period of eight months and suffered other indignities.

Lt. Colonel Paul Almanza has now concluded that there is enough evidence presented at the Article 32 hearing to proceed to a court martial. It seems likely that the Military District of Washington authority Col. Carl R. Coffman will eventually send a recommendation for a court martial to Maj. Gen. Michael Linnington. And Gen. Linnington is sure to follow orders and decide to court martial Pfc. Manning.

WHERE: It is assumed the court martial will take place at Fort Meade, Maryland 21113

WHY: Pfc. Bradley Manning was mistreated so that a message could be sent to other soldiers not to expose U.S. misconduct, malfeasance and illegal activities. The mistreatment stopped after citizens came together and publicly lambasted the government and military for such despicable behavior. It is hoped that continued pressure from the citizenry can force the government to rethink its case against Manning. Should this case go to court martial, it is possible that details of more illegal government activities will be revealed.

The diplomatic cables which Wikileaks released confirmed suspected corruption at high levels of the Tunisian government. The outrage over the circumstances surrounding Mohamed Bouazizi’s death was intensified after these revelations. And the revolution in Tunisia was emulated and became the inspiration for the Arab Spring.

It can be argued that the Arab Spring also gave inspiration to people in the USA. Occupation Wall Street, for example, caused outraged citizens to occupy public space in some 2,700 other cities.

Since the court martial seems to be an inevitability, the Pledge of Resistance–Baltimore and many other groups will continue efforts to Free Bradley Manning. And these efforts are linked to the struggle to prevent Julian Assange, of Wikileaks, from being deported to the United States. There is great fear that if Assange were brought to the U.S., he would be charged, like Manning, under the Espionage Act, which can carry a death penalty.

Before Manning and Assange: There was Vanunu Mordechai
Read more…