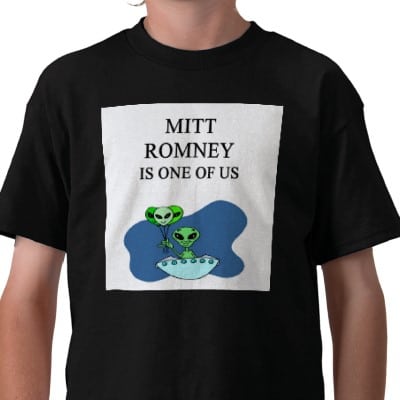 Have Aliens Been Breeding With Our Political Class? 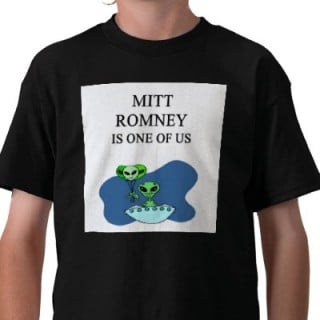 When history professor David Jacobs told me last week that the weight of the evidence suggests that human-alien hybrids are among us, my first thought was: That explains Mitt Romney.

Like serial killer Ted Bundy, the all-time quintessential Republican, Mitt Romney is smooth, suave, handsome – like he was cast in plastic, rather than nurtured in a human uterus.

There’s something inhuman in his voice and facial expressions and the way he moves and handles himself. He reminds me of the androids in Disney World’s Hall of Presidents.

If I were asked to distinguish between Romney and a walking, talking android simulacrum of Romney, I would pick the one with more gravitas. That would definitely be the android.

Is Romney a plastic shell, operated in real time by a gray alien equivalent of Karl Rove? Possibly. But it seems far more likely that he is, like Bundy, an inhuman human: one of the 2% of males who are clinical psychopaths.

The theory that Romney (like so many political leaders) is a psychopath got a boost recently from reports of him putting his dog in a cage on his car roof for a 12-hour family trip:

During the trip, the Boston Globe reported, Romney’s oldest son, Tagg, looked around through the rear window and yelled, “Dad — gross!” A brown liquid was dripping down the back window — diarrhea from an animal that just might have been caused by the stress of being inside a cage for 12 hours on top of a car going 60 mph.

And what did Romney do, even after knowing of the dog’s diarrhea? Did he realize that perhaps Seamus should be shown some mercy, cleaned up and allowed in the car, to sleep on someone’s lap?

No. Here’s how the Globe described what Romney then did:

“As the rest of the boys joined in the howls of disgust, Romney coolly pulled off the highway and into a service station. There he borrowed a hose, washed down Seamus and the car, then hopped back onto the highway. It was a tiny preview of a trait he would grow famous for in business: emotion-free crisis management.”

Emotion-free crisis management: the kind of “right stuff” that allowed Republican archetype Ted Bundy to wash the gore off himself after his serial rape-murders and head right on back to Republican headquarters as if nothing had happened.

It’s true that a lot of American business leaders exhibit that kind of “emotion-free crisis management.” Robert Hare, the world’s leading expert on psychopaths, knows them well. He calls them “Snakes in Suits.”

According to psychopathy expert Martha Stout, psychopaths often give themselves away by mistreating their pets.

Not necessarily in an aggressive or outlandish fashion; they just fail to exhibit the kind of care that someone with a heart would take for granted. Romney’s treatment of his dog would appear to be a classic example.

But what really seals the deal, branding Romney as an almost certain psychopath, is Romney’s transparent lack of remorse for the way he treated his dog, his complete lack of empathy for another creature’s suffering, his inability to understand that he did anything wrong, and his invention of ridiculous lies in an attempt to cover his tracks.

If today Romney, looking back, were to say, “You know, in retrospect, that was a cruel thing to do to our dog — I was young, it was a long time ago, I am sorry” — if he said that today, I’d forgive him.

But instead — Romney being Romney — he defaults into saying something utterly implausible. He recently told Fox’s dog-loving Chris Wallace that Seamus actually loved it up there! 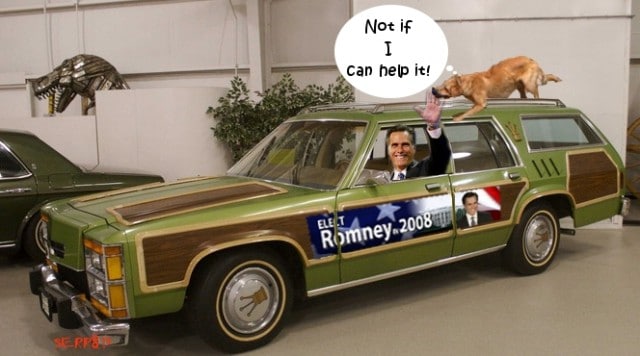 He then told Wallace that the dog was in an “air-tight container,” not mentioning the diarrhea.

Psychopaths have a hard time understanding why anyone would object to them torturing a dog – or a human being. So when they’re called on it, they offer absurd excuses about how the victim “didn’t really mind the torture” or the rape victim “really loved it.”

Or they invent even more absurd lies, like “the dog was in an air-tight container for twelve hours.”

An airtight container?! How could the dog breathe?

And how did that diarrhea get out of an airtight container to trickle down the rear windshield?!

Lanny Davis, author of the Fox News article I have quoted from at length, ponders Mitt Romney’s behavior and concludes that something is not quite right with Romney – that someone with such lack of compassion for his own dog, and the propensity to lie like he breathes, is bad news.

For an introduction to the topic of psychopaths in power, check out my article Twilight of the Psychopaths.