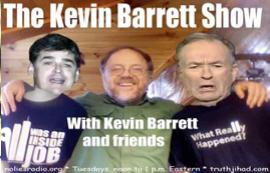 Gordon Duff: Is Comparing neocons to Nazis an insult to Nazis?_on The Kevin Barrett Show

Coming up Tuesday at 9am Pacific – 12 Noon Eastern – 16:00 GMT
Will be archived here after the broadcast by Tuesday evening.

Guest: Gordon Duff, Senior Editor, Veterans Today.  A few years ago, I made national news by telling an AP reporter that comparing Bush to Hitler would be an insult to Hitler. After all, Hitler was tragic, while Bush is farcical.

“Remember the stories about Gaddafi and how well he ran Libya? Well, this is how Hitler actually ran Germany, health care, social security, paid vacations, no unemployment, no illiteracy…” Gordon says that the title of my upcoming talk at the University of Minnesota-Duluth, which asks “Are Neocons the New Nazis?” is an insult to the nazis.

“Let’s alienate as many people as possible right away. Nazi Germany was more ‘democratic’ than America is today.”

Has America fallen that far, that fast, since the neocon coup d’état of 9/11? Tune in and find out!

Check out Kevin’s new book: Questioning the War on Terror: A Primer for Obama Voters.