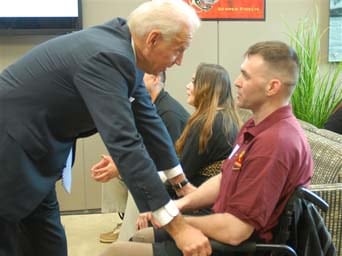 MARINE CORPS BASE CAMP PENDLETON, Calif., Jan. 21, 2012 – Vice President Joe Biden and his wife, Dr. Jill Biden, thanked wounded warriors and their families for their service and sacrifice during a visit to the Warrior Hope and Care Center here yesterday.

The 30,000-square-foot center, part of the Wounded Warrior Battalion West, opened in October to offer counseling and transition services to wounded and ill Marines, sailors and their families.The Bidens mingled with about a dozen wounded warriors — some in wheelchairs and others seated alongside family members — in a small room at the center.

The vice president said he and his wife visit service members and their families as often as possible for one reason: “To say thank you.”

“It is the single most significant obligation the United States of America has,” he added.

Biden said he’s been in and out of Afghanistan and Iraq 23 times, but “not like you,” he said, addressing a wounded Marine in front of him.

The vice president recalled one harrowing trip he took to Afghanistan before being sworn into office. They were flying up north in the mountains above the Kunar province when the helicopter he was flying in got forced down at 9,500 feet, he said.

They landed on a narrow peak, Biden noted, that was “only wide enough for the carriage of the helo we were riding in.” About six hours passed, and after dark, they were directed to climb over a ridge to reach a vehicle so they could be driven down the mountain.

Biden noted his surprise at how quickly the Marines were able to obtain photos of him on that peak to ensure their initial safety. He was told there were Marines situated even higher up, at 12,000 feet, who earlier had been in a firefight with al-Qaida.

“It’s just astounding, astounding what you do,” the vice president added. “It takes my breath away. You guys are amazing — absolutely, positively amazing.”

Biden also acknowledged the family members in the room, quoting English poet John Milton: “They also serve who only stand and wait.”

Biden recalled when his son, Beau, a major in the Delaware Army National Guard, was deployed to Iraq in 2008, He said he’d come in every morning and see his wife in the kitchen with a cup of coffee standing over the sink. “I could see her lips moving,” he said, “She’d say a prayer every single morning. The same prayer.”

Biden reiterated the nation’s commitment to care for wounded warriors and their families. He told them “phenomenal” advances and breakthroughs were on the horizon. He alluded to technology that would enable doctors to connect the nervous system to a prosthesis, enabling wounded warriors the same mobiilty as before their injury.

“There is real hope,” he said, “and there’s an absolute … positive commitment this country has made and we are going to keep.”

Biden concluded by telling the warriors, “We owe you. We owe you guys more than anybody could ever be able to repay you.”

Biden and his wife then took time to speak with each of the wounded warriors and their family members.

As Dr. Biden sat with a group of Marines in the back of the room, the vice president sat on a couch and chatted with wounded warrior Marine Corps Sgt. Eric Rodriquez, his wife, Tanya Rodriquez, and their daughter, 3-year-old Camilla.

Biden joked with Camilla for a few mintues before moving on to greet a double amputee seated in a wheelchair nearby. Marine Corps Sgt. James Amos was injured in Afghanistan on June 6. The vice president, Amos said, thanked him for his service and sacrifice.

The vice president also visited with a veteran of a past war. He knelt down in front of Thomas Marino, seated in a wheelchair, and asked him about his service in World War II as his son, Marine Corps Gunnery Sgt. David Marino and wife, Laura Marino, stood close by.

Biden then donned a Semper Fi cap and talked with other wounded warriors before he and his wife headed back to the East Coast.

The stop here was the Bidens’ last stop on a whirlwind West Coast trip. Dr. Biden had arrived on base that morning to tour the base and visit with Marines and their families, including some Gold Star wives, from an explosive ordnance disposal unit.