In his weekly newspaper Adler listed three options for Israel “to counter Iran’s nuclear weapons”. (Never mind that, unlike Israel, Iran does not possess nuclear weapons and that the latest assessment of Israel’s intelligence community – an usually honest assessment – is that Iran has not yet taken a decision to go nuclear for weapons).

Option 1 according to what Adler wrote “is to launch a pre-emptive strike against Hamas and Hezbollah.”

Option 3 “is to give the go-ahead for US-based Mossad agents to take out a president deemed unfriendly to Israel in order for the current vice president to take his place and forcefully dictate that the United States’ policy includes its helping the Jewish state obliterate its enemies.” 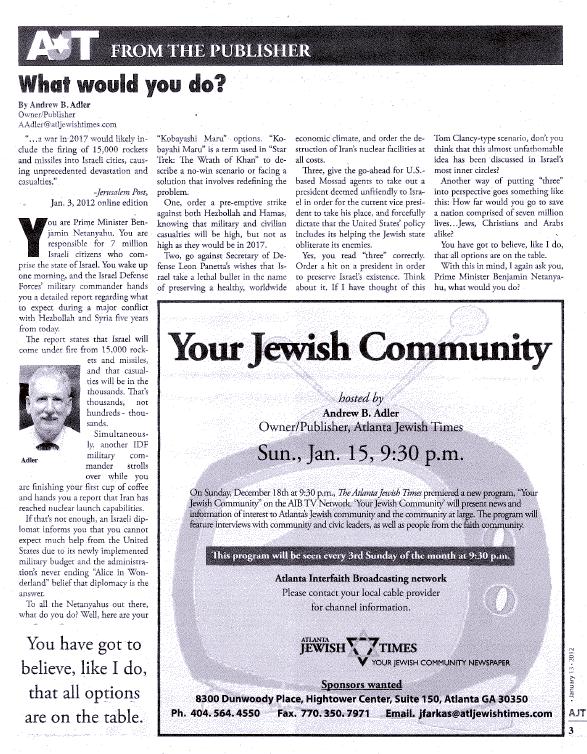 To make sure his readers got the message, Adler added this:

“Yes, you read ‘three correctly’. Order a hit on a president in order to preserve Israel’s existence. Think about it. If you have thought of this Tom-Clancy-type scenario, don’t you think that this almost unfathomable idea has been discussed in Israel’s most inner circles?”

Adler has since apologized for what he wrote. “I very much regret it,” he told the Jewish Telegraph Agency.

That was not enough to prevent an avalanche of American Jewish condemnation of him and his article.

The American Jewish Committee in Atlanta declared that his proposals were “shocking beyond belief.” Dov Wilker, director of AJC Atlanta said: “While we acknowledge Mr. Adler’s apology, we are flabbergasted that he could ever say such a thing in the first place. How could he even conceive of such a twisted idea? He surely owes immediate apologies to President Obama, as well as to the State of Israel and his readership, the Atlanta Jewish community.”

But the biggest blast of condemnation came from Abe Foxman who, as National Director of the so-called Anti-Defamation League, leads the Zionist campaign to smear all who criticise Israel as anti-Semites. He said:

“There is absolutely no excuse, no justification, no rationalization for this kind of rhetoric. It doesn’t even belong in fiction. These are irresponsible and extremist words. It is outrageous and beyond the pale. An apology cannot possibly repair the damage. Irresponsible rhetoric metastasizes into more dangerous rhetoric. The ideas expressed in Mr. Adler’s column reflect some of the extremist rhetoric that unfortunately exists – even in some segments of our community – that maliciously labels President Obama as an ‘enemy of the Jewish people.’ Mr. Adler’s lack of judgment as a publisher, editor and columnist raises serious questions as to whether he’s fit to run a newspaper.”

I have two thoughts to offer Mr. Foxman.

The first is that what is happening in America on the Republican side of the fence has about it the smell of what happened in Israel in the countdown to the assassination of Prime Minister Rabin by a Zionist fanatic. What do I mean?

There is today general agreement, even in Israel I think, that Rabin’s assassin was driven at least in part by an atmosphere of hatred for Rabin that was created by his political enemies led by Netanyahu. With the exception of Ron Paul, the Republicans who want to be president are creating an atmosphere of contempt for if not hatred of Obama on the grounds that he is “too hard on Israel (what a joke!) and not tough enough with its enemies.” By obvious implication the Obama of Republican campaign rhetoric is or could be a threat to Israel’s existence.

The second thought I have to offer Mr. Foxman is this. The answer to Wilker’s question of how Adler “could conceive such a twisted idea” is simple. He is brainwashed by Zionist propaganda.

As for my headline question, the answer is another question. Who knows? 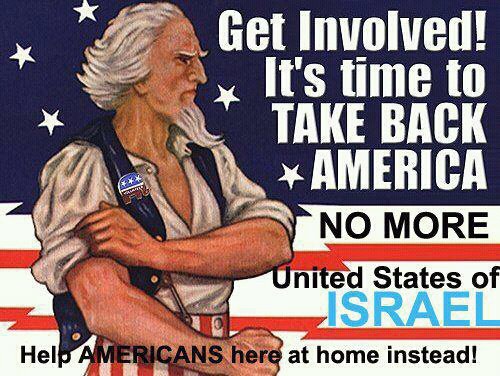