Home Veterans Can foreign gangsters bulldoze your family home without warning and get away... 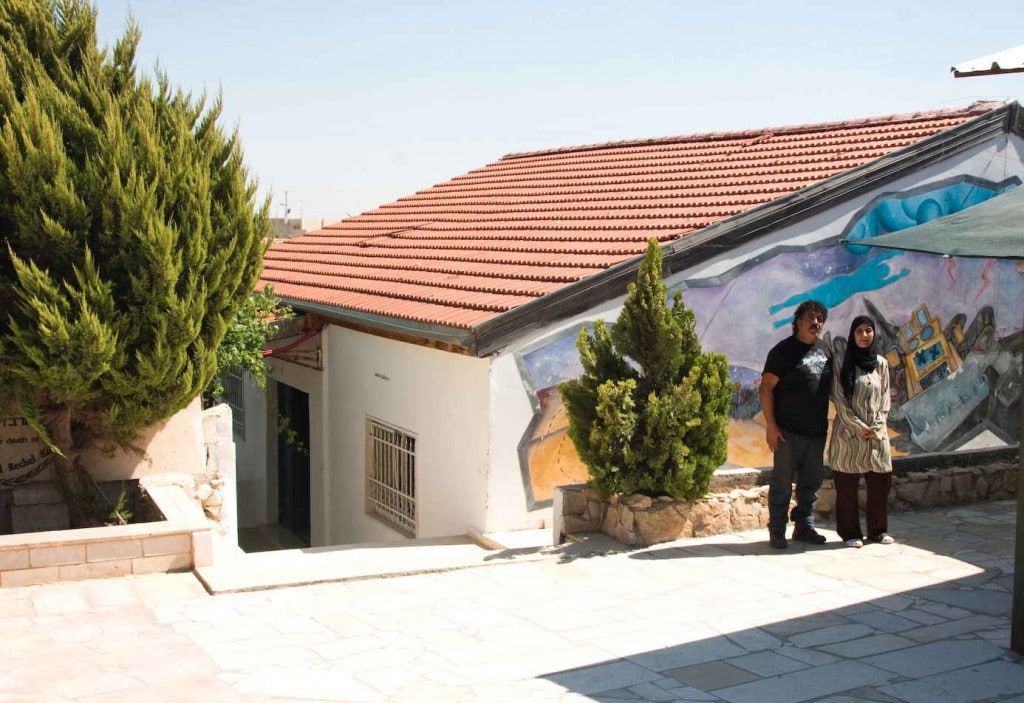 And then do the same to all your neighbours?

There can be few things more despicable than robbing a family of their home then destroying it in front of their eyes. But this is Israeli policy.

When the following news item arrived in my inbox I was more than usually interested. The Israeli Committee Against House Demolitions (ICAHD) took me to see Beit Arabiya, the much demolished and rebuilt Bedouin home, nearly six years ago. Of course, it has been bulldozed and rebuilt a few times since then.

I’m reproducing the whole thing so that you get the full flavour of Israel’s evil. And it’s from an impeccable Israeli source too.

You can also read it at here.

Israeli authorities demolished Beit Arabiya (“Arabiya’s House”) last night (Monday, January 23rd) for the fifth time, along with structures in the East Anata Bedouin compound.  Beit Arabiya, Located in the West Bank town of Anata (Area C) just to the northeast of Jerusalem, is a living symbol of resistance to Occupation and the desire for justice and peace.

As its name suggests, Beit Arabiya is a home belonging to Arabiya Shawamreh, her husband Salim and their seven children, a Palestinian family whose home has been demolished four times by the Israeli authorities and rebuilt each time by ICAHD’s Palestinian, Israeli and international peace activists, before being demolished again last night.

At around 11p.m. Monday, a bulldozer accompanied by a contingent of heavily armed Israeli soldiers appeared on the Anata hills, to promptly demolish Beit Arabiya, along with residential and agricultural structures in the nearby Arab al-Jahalin Bedouin compound. 3 family homes were demolished along with numerous animal pans, and 20 people including young children were displaced, left exposed to the harsh desert environment. While standing in solidarity with Palestinians, ICAHD staff and activists were repeatedly threatened by Israeli soldieries. ICAHD Co-Director Itay Epshtain was beaten and sustained minor injuries.

Beit Arabiya was issued a demolition order by Israeli authorities back in 1994, following their failure to grant a building permit. It has since been demolished four times, to be rebuilt by ICAHD activists. Following a reissue of the demolition order last Thursday, came last night’s fifth demolition. ICAHD Director, Dr. Jeff Halper, standing astride the ruins, vowed to support Salim and Arabiya in rebuilding their home. “We shall rebuild, we must rebuild forthwith, as an act of political defiance of the occupation and protracted oppression of Palestinians” said Halper.

Beit Arabiya has become a symbol of resistance to the Judaization of the Occupied West Bank and Israeli demolition policy. “ICAHD is as determined as always to rebuild the home, and endure in its struggle to bring about justice and peace” added Halper.

Salim and Arabiya, along with their neighbors and friends stood last night and watched as this tragedy unfold once again. Arabiya and Salim have dedicated their home as a center for peace in the memories of Rachel Corrie and Nuha Sweidan, two women (an American and a Palestinian) who died resisting home demolitions in Gaza. In the past decade ICAHD has hosted numerous visitors at Beit Arabiya, and based its annul rebuilding camp at the house, rebuilding 185 demolished Palestinian homes.

Only earlier this month, ICAHD extended an invitation to the United Nations Special Rapporteur on Adequate Housing to visit Beit Arabiya during her country visit to the Occupied Palestinian Territory scheduled for later in the month. “It is our hope, that while we cannot extend the same hospitality to the Special Raporteur Raquel Rolnik will visit the ruins of Beit Arabiya, and report on the utter cruelty, and illegality of Israeli policies and practices, and that members of the international community will follow in her footsteps”. ” said ICAHD Co-Director Itay Epshtain.

For more information and coordination of visits to Beit Arabiya, kindly contact Itay Epshtain at [email protected] or +972-54-2623306

Ruins of Beit Arabiya the morning after demolitionIsrael now controls 40 per cent  of the West Bank through 149 settlements and 102 outposts, housing more than 500,000 Jewish Israelis, as well as through closed military zones and declared nature reserves. In addition, house demolitions, forced evictions, and land expropriation, exacerbated by settler violence and the economic effects of movement restrictions, have left Palestinian communities struggling to make a living. Palestinians live in constant fear of displacement and dispersion, while Israel secures its domination and control.

The demolition of Palestinian homes is politically motivated and strategically informed. The goal is to confine the 4 million residents of the West Bank, East Jerusalem, and Gaza to small enclaves, thus effectively foreclosing any viable Palestinian state and ensuring Israeli control, and to allow for the expropriation of land, the ethnic displacement of Palestinians, and the Judaization of the Occupied West Bank.

The recent ICAHD report ‘The Judaization of Palestine: 2011 Displacement Trends’ provides a political analysis of the root causes and consequences of Israel’s house demolition policy, focusing on the demolition of Palestinian homes and other structures in the Occupied West Bank. Click here to read the report.

Back in 2006 I arranged to go on one of ICAHD’s tours of house demolition sites, a programme for journalists and students then run by one of Jeff Halper’s colleagues, another amiable American known to everyone as “JJ”.  I wrote it up for my book, Radio Free Palestine, as follows:

The tour with JJ took us to Anata… If you thought Jenin was bad, you should see Anata. This is a blighted and doomed Palestinian township, not shell-blasted like Jenin but strangulated, poverty-stricken, earmarked for destruction and on its last legs. There were umpteen demolition orders on Palestinian homes, some newly built.

Not content with persecuting the Palestinians, the Israelis are driving the Bedouin out of the Negev desert. “They are destroying our homes and stealing our land and trying to concentrate us in small reservations in order to take our land and give it to Jewish settlers. Some of these so-called unrecognized villages predated the state of Israel. I wonder who needs recognition from whom,” said Talab al-Sani’e, a Bedouin and a member of Israel’s Knesset. “Israel has created 140 Jewish towns and villages in the Negev. And now they want to destroy Bedouin villages.”

Israel stands accused of illegally confiscating more than 98 per cent of Bedouin land and committing “ugly acts of racism” against Bedouins. Israeli aircraft sprayed herbicides over large areas of crops belonging to Bedouin tribes in the Negev for over 10 years. This was stopped after Bedouin leaders and human rights activists petitioned the Israeli high court, citing the herbicides’ harmful effect on humans and animals. After the court ruling the Israeli Land Authority turned to using tractors to destroy the crops just before harvest time, according to Bedouin leaders. “They refuse to connect our villages with the national power grid, they refuse to connect us with the national water carrier, they refuse to allow us to open streets. Our children are denied schooling.”

Meeting and shaking hands with peace campaigner Jeff Halper, a professor of anthropology at Ben Gurion University and director of ICAHD, was for me a high point of my visit to the Holy Land. An American Jew, Jeff went to live in Israel in 1973 after attending rabbinical school. He had been a Vietnam war resister, and when he became an Israeli citizen he refused to bear arms during his military service and refused to serve in the occupied territories.

ICAHD works with other Israeli groups such as Bat Shalom, Rabbis for Human Rights, Taayush and Gush Shalom, and with Palestinian organizations. ICAHD resists the demolition of Palestinian homes, with Jeff himself frequently confronting the bulldozers and Israeli soldiers. He and ICAHD organize Palestinians, Israelis and internationals in rebuilding some of the demolished homes to underline their political resistance to the occupation. Their deep knowledge and research has successfully exposed the injustice.

He and his Palestinian counterpart, Ghassan Andoni, a physics professor at Birzeit University and co-founder of the Palestinian Centre for Rapprochement between People, were both nominated for the 2006 Nobel Peace Prize. In response to the nomination Professor Halper said:

I am chilled by the prospect of my country imposing a new apartheid regime on another people, by the prospect of my people, the Jews (of all people), becoming the new Afrikaaners. I must also be concerned over the rising frustration and fury in the Arab and Muslim worlds, fuelled in large measure by American and European support for Israel’s occupation policies that both deny the Palestinians their right of self-determination and turn my country into a pariah state.

ICAHD, as Israelis, block the destructive bulldozers, chain themselves in the houses, conduct campaigns to mobilize opposition to the policy in Israel and abroad, turn to the courts and, when demolitions finally occur, join the Palestinians in rebuilding demolished homes to show solidarity and resistance.

We have come to see house demolitions as the very essence of the conflict between our two peoples: Israel’s exclusive claim to the entire country in the name of the Jewish people at the expense of another people living in the country … thisis what gives the policy of house demolitions its special significance.

When, as Israelis, we resist home demolitions and rebuild demolished homes as acts of civil disobedience, we are acknowledging the rights of both people to share the country. We are affirming our recognition that Palestinian claims carry equal authority to our own. And we are proclaiming loudly: We refuse to be enemies!

God bless Jeff and ICAHD. If in Jerusalem be sure to visit this remarkable man and his organization

Here’s a further note from that visit to ICAHD:

Palestinians do not have the luxury of home-delivered mail (even in East Jerusalem), so demolition orders are distributed haphazardly. A building inspector may knock on the door and hand the order to anyone who answers, including small children. More often the order is slipped into the doorframe or left under a stone near the house. Palestinians frequently complain that they never received the order before the bulldozers moved in, and thus were denied recourse to the courts. In Jerusalem a favorite practice is to “deliver” an order at night by placing it somewhere near the targeted home, then arrive early in the morning with the Caterpillar.

America and the rest of the West should understand clearly why Caterpillar has become the hated symbol of dispossession, ethnic cleansing and oppression, and has been the target of disinvestment campaigns.

Stuart’s book Radio Free Palestine, with Foreword by Jeff Halper, tells the plight of the Palestinians under brutal occupation. It can now be read on the internet by visiting RadioFreePalestine.org.uk.
http://www.radiofreepalestine.co.uk
[email protected]pse.co.uk
ATTENTION READERS
Due to the nature of independent content, VT cannot guarantee content validity.
We ask you to Read Our Content Policy so a clear comprehension of VT's independent non-censored media is understood and given its proper place in the world of news, opinion and media.