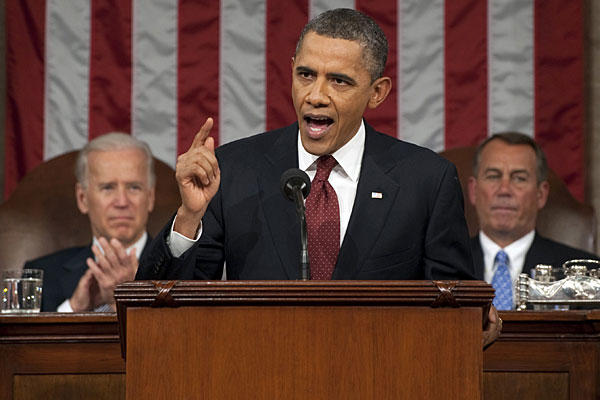 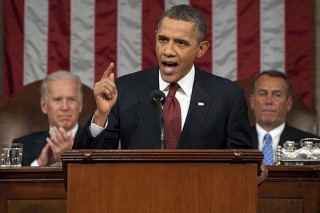 Obama claims “a world once divided [on Iran]. . .now stands as one” and that Iran is “isolated”. Is it Iran or the US & Israel who are “isolated”?

Press TV: US president Barack Obama has asserted the country’s ironclad commitment to Israel’s security; while repeatedly threatening Iran with what he calls ‘all options on the table’.

Obama once again renewed US threats against Iran during his State of the Union address before a joint session of Congress on January 24, saying that Washington will maintain pressure on the Islamic Republic over its nuclear program.

“America is determined to prevent Iran from getting a nuclear weapon, and I will take no options off the table to achieve that goal,” the US president said.

Iran has categorically refuted the US-led allegations regarding its nuclear program, insisting that the country’s nuclear program is only intended for peaceful civilian purposes.

Joshua Blakeney, staff writer from VT; joins Press TV to share his opinions on the issue of the US president’s State of the Union Speech.

Press TV: Joshua Blakeney thank you so much for joining us. Let us go directly to the first question which starts with what the US president in the State of the Union address said and is it really a disinformation and that is that, Iran is on the path of acquiring a nuclear weapon?

Blakeney: Yes, it was a quite myopic speech, coming from the president of the United States. I mean, I found it particularly telling that he made the statement that “the world was once divided and”, thanks to him, “the world is now united on the question of Iran.”

I am having some feedback, I apologize. But the reality is of course that the Non-Aligned Movement – which is consisted of a 120 nations – issued a statement just eight days ago in which they endorsed Iranian sovereignty and expressed their hostility towards the US encroaching on Iranian sovereignty.

And therefore that was one utterance from the President of the United States that was evidently false.

Obviously the insinuation that Iran is trying to acquire nuclear weapons is buttressed by no evidence and of course the IAEA, [International Atomic Energy Agency], any statements they have made in which they have indirectly implied this, has been inferred from evidence, so called, provided to them by its member states like the United States and Israel and Britain and therefore their statements are not reliable at all.

Iran clearly is trying to develop a civilian nuclear program, like France has; like many countries in the world have; which is completely justifiable and indeed legal.

And so the president of the United States I think reflected not necessarily his own perspective but those of his backers. You know, the United States political system is one where money speaks; in a capitalist system those who own capital have political clout.

And the statements that Barack Obama made vis-à-vis the Middle East, and really in general to do with domestic economics also, I believe, were the product of his backers.

And we know who is supporting the Democrat Party financially and what their agenda is in terms of Middle East policy.

And that in my humble opinion is to promote the interest of the state of Israel, often in fact jeopardizing traditional US-Middle East policy which was to try and do bilateral negotiations within ensconced Middle East regimes. And therefore this speech has to go down as an embarrassment.

And in fact if you look, if you go to about an hour, into Barack Obama’s State of the Union Address in about an hour into it, you will see that when he mentions Iran and when he mentions his ironclad support for the State of Israel, that actually only about half of the Congress persons clapped which might indicate that there is some discontent with this tendentious policy of the United States towards the State of Israel. 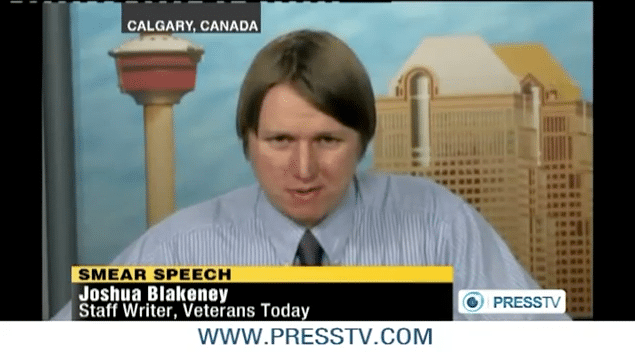 Press TV: Joshua Blakeney, this all options on the table is something again perhaps, maybe because of a reelection year for Obama maybe its a signal and some say for the Israeli lobby at the same time the great length that the United States is going to get sanctions on Iran.

We know that they have made and introduced the sanctions, trying to get EU [European Union] which they got their approval even though it’s at the behest of Europe in terms of what they are going through regarding the Euro zone crisis, of course going with his co-worker [US Secretary of the Treasury] Timothy Geithner all the way to China and we saw what happened there regarding getting China on board and of course then with India.

I mean what is it that the US president means with this ‘all options on the table’?

Blakeney: Well, I think it is largely empty rhetoric from the President of the United States and I think there is a tendency among the political class to think if they repeat something as many times as possible that it would begin to be true.

I do not think so, so we are seeing the decline of Anglo-America and this kind of Euro- American imperialist world that the planet has been victim of for the past 500 years really since 1492 and we are living in a multipolar world now, one where Iran has some agency.

And if the European Union and the United States wants to work in Israel’s interests and against its own interests of doing commercial dealings with Iran, then Iran will go elsewhere and trade its resources and goods with other nations which I think is a good thing. I think it is good that we are living in a multipolar world.

One of the intellectuals authors of the “war on terror” was an individual named Charles Krauthammer, who in 1990 authored a paper entitled The Unipolar Moment, in which he said, oh this moment after the Soviet Union has declined US must jumped on it, because it won’t be there for ever.

And that unipolar moment, you know, metastasized into the invasion of Iraq and the invasion of Afghanistan. But I believe that actually they cannot invade and attack Iran because they are bereft of soldiers for a start; they’re overstretched militarily, the United States, and moreover Iran has a capability to defend itself.
Press TV: So what is it [the US] trying to do there when it keeps saying it Joshua Blakeney, I mean, some say well it is a distraction from the problems that he [Obama] is facing at home. And I am talking about the Occupy movement, do you agree with that?

Blakeney: Yes, to an extent. You know it offers a scapegoat, a smokescreen to distract people. So I do agree to a large extent with what my colleague said.

You know the fact of the matter is that US politicians need to pander and Kowtow to the Israel lobby in the United States.

JJ Goldberg did a study in the 1990’s in which he deduced that 45% of Democrat party donations came from individuals who are partisan to the State of Israel.

And in 2006 Richard Cohen did a study in the Washington Post, in which he indicated 60% of the Democrat Party [money] comes from individuals whose primary allegiance is to the state of Israel.

So if 60% of the Barack Obama’s money is coming from individuals whose first priority is Israel, is it very surprising that Barack Obama would have this so called ‘ironclad’ consensus with the state of Israel?

I think that this is historically precedented, if you look in 1965 for example, when the British empire was trying to extend self determination and self rule to the inhabitants of the Rhodesia, the natives of Rhodesia, we saw the local crazed ethnic nationalists form a schism in the British empire and rise up and declare independence likewise the US after the Cold War had no use for Israel anymore.

[The divergence between a rational U.S. Middle East policy and the Israeli Middle East policy of denying Arabs and Muslims cohesion and stability is analogous with the divergence of interests between the declining British Empire and regional Rhodesian white ethnic nationalists in 1965 (as portrayed from 5 mins 52 seconds in the above video). ]

After 1967 Israel proved itself to be a formidable fighting force and within the context of the Cold War the United States could use Israel to smash up this or that Arab nation or to extend its Middle East policy.

After the Cold War what use did the US have for Israel or for South Africa? In the case of South Africa, the Afrikaners did not have a lobby in the United States and so the US cast them adrift in the 1980’s and the VETO they provided them in the United Nations dissipated.
Unfortunately, what would have been logical and rational from the perspective of US hegemony who would obviously want to win over Middle East governments to resist the hegemony of the …..

Press TV: Joshua Blakeney, the US president said that this is the right time for the United States to be on the right side of the Middle East.

Is the US on the right side of the Middle East? Quickly [we have] twenty seconds or less.

Blakeney: No, it is definitely not. In the 1980s the Israeli government formulated a new policy of wanting to destabilize the Middle East which goes against US oil interests, against the US rational interests as a global hegemon.