In the wake of the accusation by Chas Freeman that his nomination to lead the National Intelligence Council was derailed by an “Israeli lobby,” a forthcoming memoir by another distinguished ambassador adds stunning new charges to the debate.

The ambassador, John Gunther Dean, writes that over the years he not only came under pressure from pro-Israeli groups and officials in Washington but also was the target of an Israeli-inspired assassination attempt in 1980 in Lebanon, where he had opened links to the Palestine Liberation Organization.

Dean’s suspicions that Israeli agents may have also been involved in the mysterious plane crash in 1988 that killed Pakistan’s president, General Mohammed Zia ul Haq, led finally to a decision in Washington to declare him mentally unfit, which forced his resignation from the foreign service after a thirty-year career.

After he left public service, he was rehabilitated by the State Department, given a distinguished service medal and eventually encouraged to write his memoirs. Now 82, Dean sees the subsequent positive attention he has received as proof that the insanity charge (he calls it Stalinist) was phony, a supposition later confirmed by a former head of the department’s medical service.

Dean, whose memoir is titled Danger Zones: A Diplomat’s Fight for America’s Interests, was American ambassador in Lebanon in August 1980 when a three-car convoy carrying him and his family was attacked near Beirut. 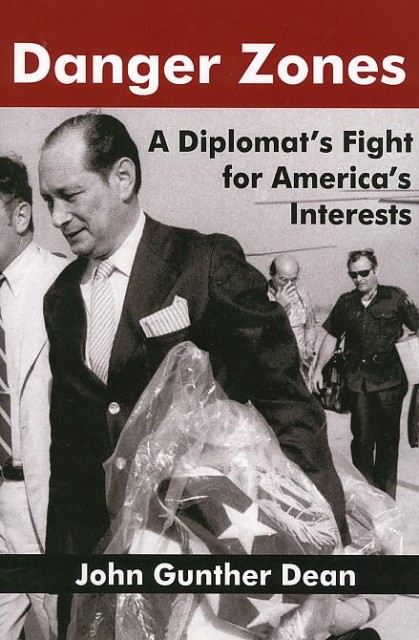 Dean, whose memoir is titled Danger Zones: A Diplomat’s Fight for America’s Interests, was American ambassador in Lebanon in August 1980 when a three-car convoy carrying him and his family was attacked near Beirut.

“I was the target of an assassination attempt by terrorists using automatic rifles and antitank weapons that had been made in the United States and shipped to Israel,” he wrote.”Weapons financed and given by the United States to Israel were used in an attempt to kill an American diplomat!”

After the event, conspiracy theories abounded in the Middle East about who could have planned the attack, and why. Lebanon was a dangerously factionalized country.

The State Department investigated, Dean said, but he was never told what the conclusion was. He wrote that he “worked the telephone for three weeks” and met only official silence in Washington.

By then Dean had learned from weapons experts in the United States and Lebanon that the guns and ammunition used in the attack had been given by Israelis to a Christian militia allied with them.

“I know as surely as I know anything that Mossad, the Israeli intelligence agency, was somehow involved in the attack,” Dean wrote, describing how he had been under sharp criticism from Israeli politicians and media for his contacts with Palestinians. “Undoubtedly using a proxy, our ally Israel had tried to kill me.”

Dean’s memoir, to be published in May for the Association for Diplomatic Studies and Training Memoir Series by New Academia Publishing under its Vellum imprint, has been read and approved for publication by the State Department with only very minor changes, none affecting Dean’s major points.

Its underlying theme is that American diplomacy should be pursued in American interests, not those of another country, however friendly.

A Jew whose family fled the Holocaust, Dean resented what he saw as an assumption, including by some in Congress, that he would promote Israel’s interests in his ambassadorial work.

Dean, a fluent French speaker who began his long diplomatic career opening American missions in newly independent West African nations in the early 1960s, served later in Vietnam (where he described himself as a “loyal dissenter”) and was ambassador in Cambodia (where he carried out the American flag as the Khmer Rouge advanced), Denmark, Lebanon, Thailand (where Chas Freeman was his deputy) and India.

He takes credit for averting bloodshed in Laos in the 1970s by negotiating a coalition government shared by communist and non-communist parties.

He was sometimes a disputatious diplomat not afraid to contradict superiors, and he often took–and still holds–contrarian views.

He always believed, for example, that the United States should have attempted to negotiate with the Khmer Rouge rather than let the country be overrun by their brutal horror.

As ambassador in India in the 1980s he supported then-Prime Minister Rajiv Gandhi’s policy of seeking some kind of neutral coalition in Afghanistan that would keep the American- and Pakistani-armed mujahedeen from establishing a fundamentalist Islamic state.

For several years after the Soviet withdrawal, India continued to back Najibullah, a thuggish communist security chief whom the retreating Soviet troops left behind.

After the mujahedeen moved toward Kabul, Najibullah refused a United Nations offer of safe passage to India. He was slaughtered and left hanging on a lamppost.

It was in the midst of this Soviet endgame in Afghanistan that Dean fell afoul of the State Department for the last time.

After the death of General Zia in August 1988, in a plane crash that also killed the American ambassador in Pakistan, Arnold Raphel, Dean was told in New Delhi by high-ranking officials that Mossad was a possible instigator of the accident, in which the plane’s pilot and co-pilot were apparently disabled or otherwise lost control.

There was also some suspicion that elements of India’s Research and Analysis Wing, its equivalent of the CIA, may have played a part. India and Israel were alarmed by Pakistan’s work on a nuclear weapon–the “Islamic bomb.”

Dean was so concerned about these reports, and the attempt by the State Department to block a full FBI investigation of the crash in Pakistan, that he decided to return to Washington for direct consultations.

Instead of the meetings he was promised, he was told his service in India was over. He was sent into virtual house arrest in Switzerland at a home belonging to the family of his French wife, Martine Duphenieux.

Six weeks later, he was allowed to return to New Delhi to pack his belongings and return to Washington, where he resigned.

Suddenly his health record was cleared and his security clearance restored. He was presented with the Distinguished Service Award and received a warm letter of praise from Secretary of State George Shultz.

“Years later,” he wrote in his memoir, “I learned who had ordered the bogus diagnosis of mental incapacity against me. It was the same man who had so effusively praised me once I was gone–George Shultz.”

Asked in a telephone conversation last week from his home in Paris why Shultz had done this to him, Dean would say only, “He was forced to.”

Barbara Crossette is The Nation’s United Nations correspondent. A former foreign correspondent for the New York Times, she is the author of several books on Asia, including So Close to Heaven: The Vanishing Buddhist Kingdoms of the Himalayas, published by Alfred A. Knopf in 1995 and in paperback by Random House/Vintage Destinations in 1996, and a collection of travel essays about colonial resort towns that are still attracting visitors more than a century after their creation, The Great Hill Stations of Asia, published by Westview Press in 1998 and in paperback by Basic Books in 1999. In 2000, she wrote a survey of India and Indian-American relations, India: Old Civilization in a New World, for the Foreign Policy Association in New York. She is also the author of India Facing the 21st Century, published by Indiana University Press in 1993.