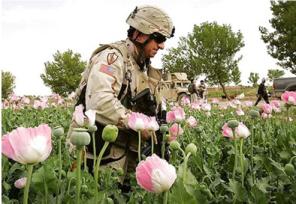 “A Nazi & a Drug Lord in Charge of Police in Osh?”

(Monday, 30. January 2012) – Today Turkish Weekly ran an investigative piece on the newly appointed chief of police in Osh-Kyrgyzstan. The new police chief Suyun Omurzakov, who used to be a deputy minister of interior, has been known as a highly influential drug lord, a leader of organized criminal groups, and he was the subject of a criminal investigation in the past:

In October 2009, the Kyrgyznews.com published an article pointing to a direct link between the then Osh city deputy chief of police S. Omurzakov and organized criminal groups engaged into drug trafficking, referring to this person as one of the most influential drug lords in the south of Kyrgyzstan.

Another report that investigates the June 2010 events developed by a coalition of Kyrgyz and Uzbek human right defenders “Oshskaya Initsiativa” (Osh Initiative) speaks of Omurzakov as a leader of an organized Kyrgyz criminal group, along with the mayor of Osh Melis Myrzakmatov, and crime bosses Almanbet Manapiyaev and Kadyr Dusanov (“Jengo”), etc., who were directly involved into plotting, leading, financing and participating in anti-Uzbek pogroms and distributing arms and ammunition among Kyrgyz militia. …

Since 2001 Kyrgyzstan has been hosting the Transit Center at Manas (formerly Manas Air Base) as the transit point for US military personnel coming and going from Afghanistan, and pays 200 million for continued use of the facilities. For years the base has been riddled with scandals and fiascos.  Last December Boiling Frogs Post EyeOpener Investigative Report took a closer look at “The Manas Question: Drugs, Revolution & Terrorism on the Road to Afghanistan”:

But as important as the base is to the Kyrgyz people, the true nature of Manas remains an open question. For years, it has been at the centre of a string of allegations revolving around drug-running, terrorism and stage-managed revolutions.One of the most surprising revelations to emerge from Manas centered around the story of Abdolmalek Rigi, the former leader of the Jundullah terrorist organization who was captured by Iran onboard a flight from the United Arab Emirates to Kyrgyzstan.

Jundullah is a Pakistani tribal militant group that concerns itself with plight of Sunni Muslims in the predominantly Shiite Iran. Despite widely-acknowledged links to al-Qaeda, the CIA has been funding the group for years as a proxy force to commit attacks inside Iran, where it is believed to have killed and injured over 500 civilians since 2003.As Rigi himself told his Iranian captors, his story included the air base at Manas, which he claims the US uses to conduct covert meetings with people like himself.

You can watch the full report here at Boiling Frogs Post.

Last year, Peter Dale Scott wrote a lengthy article outlining how US intervention in Kyrgyzstan, in the name of protecting its strategic air base, has led to the destabilization of Kyrgyz politics and to a drastic increase in the flow of drugs through the country:

“…that there is a deep force behind drug, intelligence, and jihadi activity, would be consistent with the legacy of the CIA’s earlier interventions in Afghanistan, Laos, and Burma, and with America’s overall responsibility for the huge increases in global drug trafficking since World War II. It is important to understand that the more than doubling of Afghan opium drug production since the U.S. invasion of 2001 merely replicates the massive drug increases in Burma, Thailand, and Laos between the late 1940s and the 1970s. These countries also only became major sources of supply in the international drug traffic as a result of CIA assistance (after the French, in the case of Laos) to what would otherwise have been only local traffickers.

As early as 2001 Kyrgyzstan’s location had made it a focal point for transnational trafficking groups. According to a U.S. Library of Congress Report of 2002,

Kyrgyzstan has become a primary center of all aspects of the narcotics industry: manufacture, sale, and drug trafficking. Kyrgyzstan’s location adjacent to major routes across the Tajik mountains from Afghanistan combines with ineffectual domestic smuggling controls to attract figures from what a Kyrgyz newspaper report characterized as “an international organization uniting an unprecedentedly wide circle of members in the United States, Romania, Brazil, Russia, Belarus, and Kazakhstan….These are no half-literate Tajik-Afghan drug runners, but professionals who have passed through a probation period in the mafia clans of the world narcotics system….”

Mr. Scott goes on to shine a further spotlight on the importance of Kyrgyzstan as a critical US “Transit Hub”:

The Badakhshan drug corridor is a matter of urgent concern for Russia. The Afghan opiates entering Russia via Tajikistan and Kyrgyzstan, the chief smuggling route, come from Badakhshan and other northeastern provinces. The reductions of the last three years in Afghan drug production, while inadequate overall, have minimally impacted the northeast, allowing opiate imports into Russia to continue to grow. Meanwhile the much-touted clearing of opium poppy from the Afghan northern provinces has in some cases simply seen a switch “from opium poppies to another illegal crop: cannabis, the herb from which marijuana and hashish are derived.”

As a result, according to U.N. officials, Afghanistan is now also the world’s biggest producer of hashish (another drug inundating Russia).67 This has added to the flow of drugs up the Badakhshan-Tajik-Kyrgyz corridor. In short, the political skewing of America’s Afghan anti-drug policies is a significant reason for the major drug problems faced by Russia today.

IN July 2010 I wrote a lengthy investigative piece at Boiling Frogs Post on Kyrgyzstan, Bakiyev, Mina Corp and the connected US operatives:

When we talk about the strategic importance of Afghanistan, Pakistan, Tajikistan, Kyrgyzstan, and other ‘stans’ we are not talking only about strategic in the sense of traditional resources-oil, we also talk about ‘narcotics resources’:

At the moment the stock of pure heroin in Afghanistan is estimated at slightly below 3,000 tons, and the revenues of Afghan drug suppliers reach around $3 bn annually. The international drug mafia earns at least $100 bn annually on heroin from Afghanistan, the money nourishing organized crime not only in Afghanistan but also across Central Asia – in Kyrgyzstan, Kazakhstan, Tajikistan, and Uzbekistan.

And no, the real lords of these resources are not the farmers in Afghanistan or the mules transporting them. The real lords of heroin enterprises happen to be those who’ve been ‘groomed and planted’ to rule the source and transit nations, and the ones who rule those rulers who reside in the United States and other Western countries:

The revenues generated by the drug business are distributed among the criminal groups controlling various segments of the supply chain linking poppy farms to narcotics consumers. While Afghan poppy growers are enduring extreme poverty, the owners of the fields mostly reside in the US, Great Britain, and other Western democracies.

I encourage you to take the time and read the entire investigative report on Kyrgyzstan here. Once you do that you’ll understand why it makes perfect sense to have a drug boss lead Kyrgyzstan’s police force. It takes far more than a few mules to transport tens of billions of dollars worth of poppies-heroin. And it takes more than a third-world shack to house-base the loads as a transit hub. What you need is a major airbase and a massive hub. A la USA.