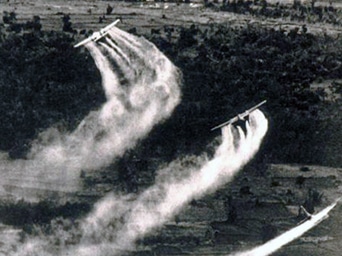 US & Monsanto: Conflicts of interest in Rel. to Vietnam Vets Exposure to Agent Orange. et al in Korea and Vietnam

Adm. Zumwalt was keenly aware that his efforts were being under minded during the years he was tasked to look into the Agent Orange issue when he was given a job at the VA. His report was classified and later leaked and can be found on the internet.

Also, a Scientist at the EPA was fired when she tried to bring criminal charges against Monsanto some years back. The Chief of the EPA Enforcement Division was also fired by Bill Clinton and Clinton replaced him with the Counsel from Monsanto. Of course the American people were compromised by that appointment.

The fact that Hillary Clinton’s law firm worked for Monsanto does not come as a surprise anyone. Also, keep in mind Monsanto’s claim that if the VA issued benefits to Vietnam veterans it would devalue company stock. The was uncovered a few years ago.

If enough veterans in the country write Judge Weinstein if he is still on the bench he might be compelled to ask the AG to panel a Federal Grand-Jury to look into charges that some politicians who held positions in the executive branch were engaged in a conflict of interest. For the most part government contractors remain exempt from litigation unless the is a criminal violation of law where one can obtain prosecution. Yet not a single lawyer representing a veterans organization or who has represent4ed a veteran has been able to break down the immunity provided these companies.

In the case of the an EPA official she was fired and rehired by an order of the Federal Court and is still a scientist at the EPA. The key point in the overall case was Monsanto and other companies falsified Government End Use Certificates when they shipped the herbicides from the factory overseas to the U.S. military for use in Vietnam. The reports that some containers were as much as five to ten times or more contaminated that were in lab reports and Certificates of compliance were thus falsified – the levels of dioxin were deadly in terms of exposure to the troops in the field in Vietam.

Judging from the amount of ChemPAC money following it into into successive Administrations, officials, members of the House and Senate, don’t expect the AG to get off his dead god dam ass anytime soon. Second, it’s a Federal Crime and a direct violation of the Federal Procurement Regulations to falsify end use certificates. I would suspect that many of the Monsanto officials and government inspectors who were resident at the companies concerned have long since retired, or are dead and have been buried.

Every chemical company employee from the COB to the guy that sweeps the floors is required to pay into the PAC. Also, the Multi-District Settlement Fund went bankrupt years ago. Judge Weinstein once sent me a copy of the Federal Masters Report. The lawyers representing veterans end up with millions and the veterans ended up with nothing – with thousands of veterans never even seeing a dime. Those who were able to get money from the Settlement Fund never saw more than $4,000 dollars only if you died from cancer and considering the cost of the funerals t would not pay the bill.

However, the Republic of Korea Government won a case against Monsanto. et al on behalf of its veterans who served in Vietnam. I believe the settlement was about $40 Million in Korea for some 6,000 ROK Veterans who served with the U.S. in Vietnam which
included members of the Tiger and White House Divisions and the 5th ROK Maine Rgt. Its not clear how many had died of cancer.

The lawyers representing U.S. veterans screwed their clients big time. While American veterans could have filed malpractice cases against their lawyers more likely have lost the statute of limitations and of course the legal malpractice insurance company executives have rejoiced because in NY State alone 4,466 veterans are now dead and buried, 98% of them never saw a dime from the judgment in the MDL. Those men died between 1975 and 1985, 250-400 known suicides alone. It’s is estimated that about 6,000 to 8,000 have died to date.

There are a few lawyers in the U.S. who have been successful in filing cases on behalf of veterans. The successful cases are sealed of course. The lesson learned – any time a lawyer asks you to get involved in a class action tell him to f**k-off. No one benefits from a class action litigation, only the lawyers.

To my knowledge the Federal Master was never audited by the Court or the AG. $740 Million dollars and the majority of the vets never saw a dime. The trial lawyers and the defendant lawyers are still laughing all the way to the bank and so are the chemical companies executives concerned.

The amount of PAC money flowing to Congressmen and Senators is in the millions of dollars. Many of the lawyers representing the veterans if still alive live in Florida. Hopefully, they will be eaten by the alligators and giant snakes –

One thing is certain – the South Korean Government stands by its veterans while the VA in the U.S. has shit all over it veterans when it comes to processing claims. The average employee in the regional claims office works 1.4 hours a day. It is estimated that about 8,000 plus veterans in NYS have died without seeing a dime.

However, things may be looking up. A Korean war vet discharged at 100% from the Army in 1954 and placed in the hands of the VA – the VA finally found his file and refused to pay him what was really due to him. They gave him 60% and he is now in his 80’s and will not appeal the case. He is only being paid from the time they found his file and he had to re-file.

Monsanto chemical company is widely viewed by State Attorney Generals throughout the U.S. as a criminal organization. Its reputation overseas is not any better. They have spun off their Chemical Division in an effort to reduce liability. Other companies have attempted to become more environmentally sound if there is such an effort.

Democracy is for sale – just ask President Obama – he pulled in a record one Billion Dollars. Hopefully, whoever gets into the White House will keep the General on as head of the VA. However, VN Veterans have died at a higher rate than WWII veterans. 50% of the men who served in my unit in Vietnam have died of Cancer. If you want to press a case with the VA your much better pressing it with the government as a Unit than with the so called traditional veterans organizations which are losing their membership. However, individual combat units that have been organized into their own veterans organizations have done rather well.

It makes no makes no difference who gets elected to public office. Follow the campaign contributions and PAC Money. There is not a lawyer, Congressmen or Senator, or White House official who does not have a conflict of interest with the American people in Washington. The head of the VA is the only agency official that is there for veterans and since the General has been the Secretary there has been no conflict. However, that has not been true in the past with previous Secretaries.

The Chemical industry pays one lawyer full-time to under mind veterans in our nation. He is a retired Army officer who served as a Captain and was caught planting phony articles in medical and professional journals and failed to disclose that he had been attorney for the Chemical industry. He has blown his cover.

The amount of PAC money being spread around elected officials may far exceed the $740 Mil. After all, Obama raised $1 Billion in his campaign. That is enough money to make up the loss of revenue in the VA Budget for 2012. The President just laid off 80,000 men on active duty and the situation will not get any better with severe impact on the national and economic security. The VA has already labeled returning veterans psychiatric cases and like during the Vietnam conflict business and industry will not be hiring them any time soon with few exceptions.

Not in 45 years has any veterans organization in the U.S. been able to set aside the immunity provided the chemical industry by the government. There has to be strong and positive pressure on the VA and Congress to get improve benefits and their availability to veterans.

I am not suggesting that Helene and her fellow WAC’s give up their fight. However, the future of Democracy does not look good. There is a need for major changes in campaign finance laws and lobbying laws. These laws have to be reformed and even the heads of political parties know it has to happen. The American people are already fed up with manner in which the government functions and the impact of PAC money has already taken its toll on Veterans and the American people at large.

The loss of the one billion dollars will have a tragic impact on services at the VA. If that short fall is not made up the VA will be in a world of shit and it is doubtful that VA doctors and nurses will continue in their career path.