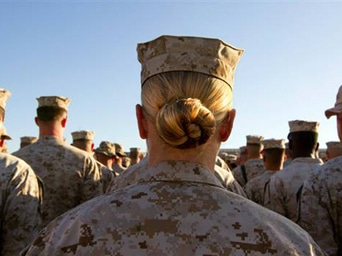 The changes are included in a report the department submitted to Congress today, based in part on findings the Military Leadership Diversity Commission reported in March.

Today’s report includes a “vision statement”: “The Department of Defense is committed to removing all barriers that would prevent service members from rising to the highest level of responsibility that their talents and capabilities warrant.”

A Pentagon news release accompanying the announcement quotes Defense Secretary Leon E. Panetta as saying women have proven themselves in and out of battle.

“Women are contributing in unprecedented ways to the military’s mission,” he said. “Through their courage, sacrifice, patriotism and great skill, women have proven their ability to serve in an expanding number of roles on and off the battlefield.

“We will continue to open as many positions as possible to women so that anyone qualified to serve can have the opportunity to do so,” the secretary added.

The biggest barrier DOD is lifting is a 1994 policy prohibiting women from jobs — such as tank mechanic and field artillery radar operator — that take place near combat units. With that bar removed, more than 13,000 Army jobs will be available to women soldiers for the first time.

The second change is an “exception to policy” that will allow the Army, Navy and Marines to open select positions at the battalion level in jobs women already occupy.

The current policy, also set in 1994, bars women in jobs such as intelligence, communications and logistics from assignment at units smaller than a brigade. Nearly 1,200 assignments will open to women soldiers, sailors and Marines under the exceptions.

As the law requires, the Defense Department will not implement the new policies until Congress has been in continuous session for 30 days, which should happen later this spring.

The report notes the policy changes reflect conditions already common in the past decade’s wars, where attacks can occur without warning and battle lines can shift to formerly “rear echelon” areas.

“The dynamics of the modern-day battlefield are non-linear, meaning there are no clearly defined front line and safer rear area where combat support operations are performed within a low-risk environment,” the document’s authors wrote.

Pentagon statistics show 144 military women have been killed and 865 wounded in combat and noncombat incidents in Iraq and Afghanistan. Some 20,000 of the 205,000 service members currently serving in Afghanistan are women, and they make up about 280,000 of the more than 2.3 million troops who have served in operations over the past decade.

The report notes the changes will expand career opportunities for women, provide a greater pool of troops from which combatant commanders may draw, reduce the operational tempo for “male counterparts” by increasing the number of service members available to support direct combat forces, improve consistency in assignment policy, and give field commanders more flexibility in meeting combat-support mission requirements.

“We believe it is very important to explore ways to offer more opportunities to women in the military,” he said.

Little said the department will continue to look for ways to increase opportunities for military women. He acknowledged most of the positions involve the Army, as the nation’s primary ground force.

Today’s report addresses two of these with full or partial policy changes, and addresses the others by stating department officials are working to establish gender-neutral job standards.

“This will mean a thorough analysis of job-related physical requirements … expected of service members,” the report reads in part. “These standards will help determine which specific positions presently excluded under the special operations and physical standards criteria are suitable for general assignment of both genders.”

The report’s authors acknowledged there are “practical barriers that require time to resolve to ensure the services maximize the safety and privacy of all service members while maintaining military readiness.”

The secretary directed the services to report results, six months after the policies take effect, on their implementation of the new assignment standards and their progress developing gender-neutral physical standards.