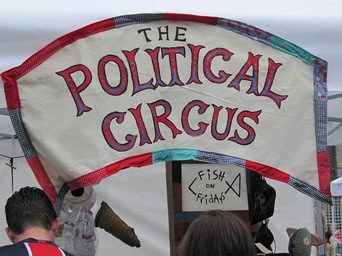 You have to admire just how slick Old Lucifer really is when you watch the political circus we have today.

With corrupt money policies and a rotten, bloody empire tied around our political necks like the famed albatross on the ancient mariner, why in the world is the most stirring issue among the idiot populace this sanctimonious religious error about procreation?

Oxymorons all! None of this present political turmoil has anything to do with Christianity and Holy Writ— It is 100% Masonic destruction of US government straight out of the Illuminati papers first exposed in 1776.

This present media whipped turmoil is diabolical in every way. Firstly, it is designed to get the most sanctimonious Oxymoron available, Rick Santorum, elected as our “Bomb for Jesus “ Emperor Puppet.

The clever Destruction of the democrats and Obama by turning the “freeloading contraceptive” millions against him with the free health care bomb is sure to empower the ignorant—which includes hundreds of millions of indoctrinated biologically alive potential voters whether Republican or Democrat.

Though it is true that “Not a nickel’s worth of difference” divides the political parties; the ultra-emotional issues of contraception and abortion will make it personal for millions.

A brilliant strategy if one wants to wipe out rational debates about money policy and bombing innocent people and replace them with pure emotional syrup. Men and women the world over want to toss discipline and romp in the sack, what can be a bigger issue?

Now we have taxpayer subsidy for the means to make screwing less scary for the females by wiping out the costliest outcome for a fleeting orgasmic delight. The “just say no stuff” is not realistic with so much “yes, yes, yes” rockin’ and rollin’ in the culture, hell even Muslims get caught up in it.

It is absolutely a private family matter, or would be in a mature group of people. Who the hell invited government to butt in? That was the trick! We took the bait. Living in a “Christian Nation” Which we aint never. Made it duck soup for Lucifer’s pincers to take control.

Even atheists want subsidized contraception. Wow, what a political boner!

Now, when insanity on the right with it’s media prodding finally nominates Rick Santorum; despite his sanctimonious piezo piety; the populace will go in his direction because a huge number of confused contraceptive/abortion issue people will forget that George Bush had exactly the same contraceptive subsidies Obama is being butchered over.

What’s funny about this, is a lot. Just like a Christian ignoring Christ to bomb for Israel; we now have millions of non and nominal Catholics entranced by the notion it is a “mortal sin” to practice birth control.

This ranks with the “Earthly Kingdom” Idea of dispensationalists as a manipulative tool for herding Lemmings over the cliff into the sea.

Catholics long ago accepted that the Pope was somehow infallible (a notion losing ground since the pedophilia corruption exploded) I had assumed that the ruling on contraception and abortion was some kind of papal edict.

Checking the Catholic encyclopedia, I Learn that neither a pope nor Jesus came up with this irrational stuff. It was Aristotle, a humanist if there ever was one, that rationalized when a fetus might be a developed human, capable of “spirit.” This original imposition of biological issues makes no sense in light of modern knowledge about what takes place after the sperm and the egg unite. There is a lot more to a unique individual than DNA.

The idea of the conception moment making the new individual is genetically okay, but there are steps immediately following conception far more important. This refers to the activity of the original stem cells as they grow/develop in a bed of malignant cancer.  Read about it here: Cancer for Profit Part one of Three

Not even the good doctor Paul, who alone treats the issue rationally, has bothered to explain the utter fragility of those cells for 56 days in the Uterus.

The issue of child molestation is totally wrong, though some cultures endorse it as “traditional” including Talmudic orthodox (how could a Creator God approve? He could not and surely did not according to Jesus.0

I smell dead fish oozing up from the right. Lucifer is proud. It appears this explosion of a strawman issue is timed perfectly to provide cover for a sick scandal of the past erupting again, this time not from Boy’s Town in Nebraska, which did get covered up despite the work of John De Kamp and others, but from Penn State where Santorum has been more than a sanctimonious onlooker.

My radio free America broadcasts lofted the pedophile ring antics up to and through the George H.W. Bush. White House, yet Americans, who will vote in November, know nada.

Wayne Madsen and Alex Jones have breached the issue, but there is surely more.