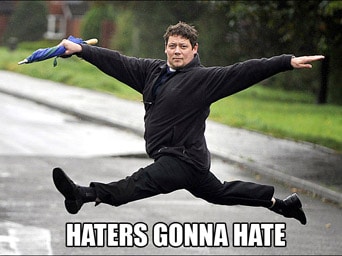 I have been a named columnist here at VT almost a full year, and this is the first time I’ve entered the “global warming” fray.

Although I read the sensational stuff at Climate Depot almost daily, and my personal views on carbon controversy say the manmade part is only hype for the market makers who screwed us over already, several times.

And, while I relished the juicy but superfluous info that came out about so-called “climategate,” I prefer less lobbied views. So sticking my big mouth in wouldn’t serve much.

Climate has changed drastically according to the best science we have, though we also have the difficulty of separating fact from fudge in everything these days. I have no friggin idea whether glaciers from a relatively recent “Ice Age” dug and filled the Great Lakes.

Like you, I only know what I know. I know the difference between information and knowledge. I count very little over the Internet as knowledge

I know I personally watched filmed “news” in an afternoon matinee as a boy, that showed a buildup of snow and ice in Antarctica. I recall because it was a topic of many conversations back around 1943 when we lived in Cambria Pines, which had one tiny theater in a barn.

I know that I watched another “news” film less than a decade ago that showed how the famous snows on Mt. Kilimanjaro had receded to almost nothing due to “global warming.”

Now I know that film and videos are showing that snow has come back to Kilimanjaro.

Those things I know only because seeing was believing back when film was innocent.

I believe, but don’t know, the whole carbon thing has been a huge scam of the kind only private bankers running our culture could pull off with the help of myrmidon minions in Hollywood, and Madison Avenue, and Washington, DC.

Frankly, I don’t give a damn. I’m old, tired and do not care to survive a helluva lot longer.

Were I one of my kids, I would be pissed off about so much, I would likely get myself tossed in a gulag or shot, or both.

The haters of mankind may eventually win over righteousness, but it will be a Pyrrhic victory at best. I pray for a ringside seat at the gates of hell.