Home Economy The Whole Truth…Nothing But The Truth. So Help Me God! 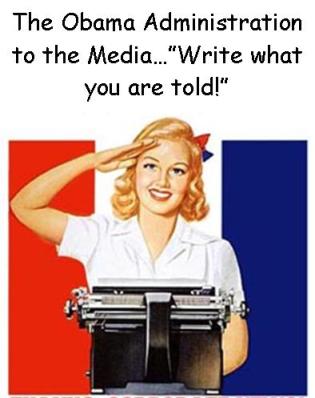 There comes a time when you just have to shake your head in amazement. Joseph Goebbels, the Minister of Enlightenment and Propaganda for Adolph Hitler, and acknowledged as one of the most brilliant propagandists in history was correct when he said…

“If you tell a lie big enough and keep repeating it, people will eventually come to believe it. The lie can be maintained only for such time as the State can shield the people from the political, economic and/or military consequences of the lie. It thus becomes vitally important for the State to use all of its powers to repress dissent, for the truth is the mortal enemy of the lie, and thus by extension, the truth is the greatest enemy of the State.”

We see Goebbel’s doctrine repeated today in America by the Obama Administration and the bureaucrats inside the Beltway; repeated over and over by a subservient nationwide media, almost without question. The media has forgotten that its primary duty is public enlightenment which is the forerunner of justice and the foundation of democracy. The duty of the journalist is to further those ends by seeking truth and providing a fair and comprehensive account of events and issues. Conscientious journalists from all media and specialties strive to serve the public with thoroughness and honesty. Furthermore, a journalist must recognize there is a special obligation to ensure that the public’s business is conducted in the open and that government records are open to inspection. Professional integrity is the cornerstone of a journalist’s credibility.

“Journalism is a public trust. Consumers need to trust that every time we share information, we have done everything possible to confirm it.” Bob Kravitz, Indianapolis Star

Those who choose to challenge this assessment only need to study Goebbels even further. Though I am not a fan of Mr. Goebbels, and believe all he and his band of Nazi thugs stood for was abhorrent, we must learn from history less we repeated it…and repeating it we are. Many have wondered how such people ever come to power in the first place. As my previous article stated, there are three key ingredients that come into play wherein the people fall prey to tyranny:
A. The government dumbs-down education and takes total control over curriculum
B. The populace is disarmed often in the name of being for “the 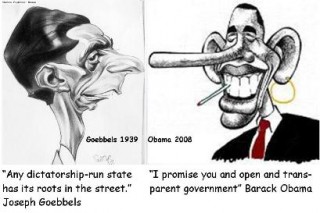 public’s own good”
C. Destruction of the family unit making people dependent on government for all their needs

Seldom do political changes occur overnight. They come about incrementally and are often so subtle we fail to even see it happen. Mr. Obama was the “Stealth or even Manchurian Candidate”. So little was known about the man except his ethnicity; and mainstream journalists didn’t bother to do his/her homework, violating the very code of conduct professed by the Society of Professional Journalists. One thing that was in evidence was that his only claim to fame was that of a “community organizer”. In layman’s terms that means stirring up support for whatever “cause de celebre” may be down on the streets and the lowest levels of discontent. Goebbels had pegged this idea as well…

“Whoever can conquer the street will one day conquer the state, for every form of power politics and any dictatorship-run state has its roots in the street.” Joseph Goebbels

Let’s start with the constant onslaught on the Second Amendment. Nobody can deny that the liberal/progressive establishment has been pecking away, state by state, at the public’s Constitutional rights to keep and bear arms. The restrictions on gun ownership have never been higher all in the name of “pubic safety”, yet even in those communities with the most restrictive laws, criminals always seem to have an arsenal much larger than the police, and the rates of gun crimes have not come down.

The Education Department, is a Cabinet-level department of the United States government. It was created by the Department of Education Organization Act and signed into law by President Jimmy Carter . It began functioning on May 16, 1980. Since it’s inception, the US has rapidly risen to the top of the heap in comparison of all other nations accept Switzerland, in annual spending per student, yet our students test at the very bottom of advanced science and math levels. It would be far worse if smaller countries with high literacy rates like Costa Rica were to have been included. NOTE: In my next article I will present you a test given to 8th grade students in 1895. If you don’t see how far our education system has fallen since then, then you are either blind or just can’t admit Failure. I am sure most US teachers could not score a passing grade on this test.

The family unit was what enabled most Americans to survive the Great Depression. Following the programs of Franklin Roosevelt and compounded by the Great Society Programs of President Lyndon Johnson, the importance of the family unit has been minimized to the point that more than 50% of the children born in America are to unwed, single parent families, destined to, in most cases a life of poverty and government dependency, paid for by working Americans.

When Obama spews forth his rhetoric about class warfare and the “rich paying their fair share”, at what point do we the wage earners begin demanding those bringing children into this world “pay their fare share of the burden they are placing on society”. That may be politically incorrect to the intellectually stupid elite, but it is high time someone show Mr. Obama the errors of his words. That should be the job of the media, which by their own code, has pledged to tell the truth.

If history is to be believed, we are on course to a reality that most Americans never believed would happen…a tyrannical change and a lost of our Constitutional rights of freedom and liberty. To those who still cannot draw a correlation between the America left to us by our parents and the ship of fools being created right before our very eyes, show me please, the Constitutionality of Obama’s Czars’ which have almost replaced the authority granted to Cabinet Positions…and show me the Constitutionality of Executive Orders dismissing the President of General Motors.

Our Supreme Court, which is tasked to determine the constitutionality of the laws enacted by Congress and the President, has come to make such constitutional decisions based, not on the US Constitution, but according to Sandra Day O’Conner, on the increased willingness of U.S. courts to take international law into account in its decisions, particularly on laws dealing with matters of politically correct issues and the death sentence. This is pure and simple, “legislating from the bench”, and outside the constitutionality regarding the separation of powers.

Let’s say I am on the right track; that my homework has proven fruitful, and that the US is headed in the wrong direction with the possibility of running off a cliff with a complete economic meltdown in the very near future. How can that be true with the “economy getting better”? I mean that is what we read in the newspapers, see on TV , and hear on the mainstream radio news programs, right?

BUT IS THE ECONOMY GETTING BETTER?

As I have said throughout the past, I am not an ardent supporter of conspiracies, but how many journalists have taken the Obama Administration to task over the Goebbel-Like stories of how the economy is improving, and is it really improving? Let’s take the unemployment figures apart and let’s see if the 8.3% unemployment figure is accurate.

The Bureau of Labor Statistics is quoted in their most recent report.

“Total non-farm payroll employment rose by 243,000 in January, and the unemployment rate decreased to 8.3 percent. Job growth was widespread in the private sector, with large employment gains in professional and business services, leisure and hospitality, and manufacturing. Government employment changed little over the month”.

That news is what we heard from every media outlet, and indeed it sounded very positive; almost uplifting. But when we look at the details as we would have in 1964 when full-disclosure meant “fully revealing all the data”, it still looks like the economy is anything but bright.

“The advance number of actual initial claims under state programs, unadjusted, totaled 361,928 in the week ending February 11”. This was actually a decrease of 39,328 from the previous week, but it showed and increase of 118,928 new unemployment filings versus 243,000 new jobs, yet they report “a drop in unemployment rate to 8.3%”…which only the government’s fuzzy math can figure. (There were 424,400 initial claims in the comparable week in 2011, so in all fairness that number looked a little better, but then again maybe we are just running out of workers to be let go).

THE REASON IS NEARLY ONE MILLION LEFT THE WORKFORCE!

The media is not doing their job. They need to dig deeper to give the American public the real numbers. The way our government works its math is why every projected project comes in way off the mark; every bill actually costs far more than anticipated; and if we were talking about the private sector working the numbers the way the government does, a lot of accountants would go to jail!

If we could really get the unemployment rate down to 8.3% through oil exploration, energy production, moving manufacturing jobs back to the US, and re-activate the housing market , every dollar earned and spent by these newly engaged workers would result in a multiplier effect amounting to 3 to 7 times what is spent, which could generate up to $3.5 trillion in spending here at home. It would solve our energy problems and mark our march back to national financial sanity.

Until then I’ll leave you with Abbott and Costello’s version of explaining unemployment the “government way” (courtesy of an old friend, Lawrence Booker):

And now you know why Obama’s unemployment figures are improving and everything is getting better.