Home Life The Confessions of an Anti-Semite 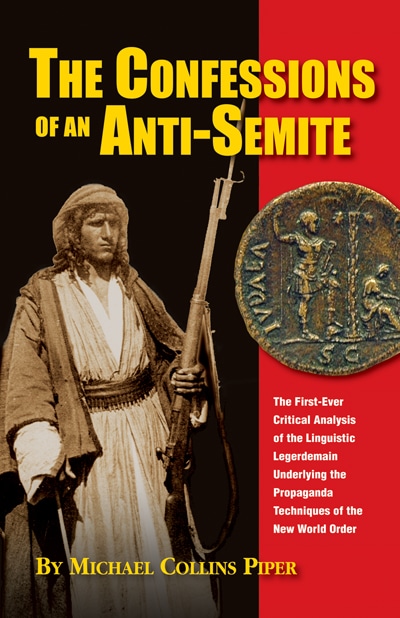 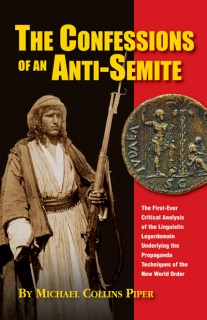 Take the bull by the horns, is an adage that advises how one should cope with difficult issues. Prolific author, Michael Collins Piper has challenged the greatest taboo in our times with the bold title of his latest book.

Piper, with his photographic memory, has always been direct and daring whenever he confronts the powerful AIPAC Lobby and the “Illegal agency for a foreign nation”—the ADL for the nearly 40 years we have been colleagues. Mike has long dared to confront the International Zionist conspirators head on, with numerous books; citing facts and opinions taken from their own writings.

For example a recent review of The Golem at VT is found here.

You or I might read a buried small story about Israeli intransigence in the New York Times, or on the Internet but the headline and date of such an obscure piece would not fix in our memory; the speed-reading Mike Piper doesn’t miss a beat, and he’s not afraid of the bullies in the Zionist dominated media.

This time Piper delves into the far-reaching crux of the dominant propaganda sourcein our western culture with a sledgehammer blow based upon his many personal experiences and the well-documented background he has become famous for.

The book speaks volumes for itself, get it from The American Free Press, softcover, $25, 466 pages.

The importance of Confessions is easily discerned by reading a recent VT column by Alan Hart that details the fears, which centuries of virulent propaganda by Jews and against Jews has caused.

A bit of my own experience may serve to illustrate: While working for Chicago Today in 1972, I had occasion to be invited to a special private lunch at the Covenant Club at 10 N. Dearborn Street, by Chicago Sun Times’ famed Columnist Irv Kupcinet.

Kup circulated among the wealthy and powerful Jews at the exclusive Covenant club (Google it) in the Loop. He invited me to lunch with a few friends. Two of the five men at our table were Bank Presidents, the other was famed football player Otto Graham. They knew that I was a “goy,” author of a book that had interested their wives.

The conversation ranged into wider topics when one of them mentioned the Holocaust®, which had been featured (again and again) in the papers. Amalgamated bank piped up, “I wish they would knock off this Holocaust stuff, all it does is piss off the goy.”

After checking me for a reaction, Banker #2 agreed, and Kup just nodded. These guys were realists, all of them Chicago products, and they had gauged the temperature of many goy for years about the obviously overdone propaganda.

It was common knowledge that many powerful and prominent Jews were leery of the constant blaring Holocaust® remembrances, which they saw as cause for alarm.

It’s acknowledged fact that if you toss enough money at anything, you will get more of it. The Zionist branch of Jewry has certainly tossed enough vague allegations of Anti-Semitism into the ether to get an abundance of it.

Piper, in clear language nails it with numerous citations from the writings of Jewish authors around the world. Mike has not only written many books on the issue of Zionism and Jewish power worldwide, but he has lectured extensively to audiences around the world who appreciate the detailed citations.

Michael Collins Piper, one of the most jovial “people persons I have ever known, ironically has been publicly tarred for being a “Hater” by the hateful Jewish Lobby, based upon his fact-filled lectures and books.

This book, like his others is an education in all the important truth the media and schools have prevented you from getting.