Home Government How the Debacle in Aghanistan Disgraced its Cheerleaders

The lesson of the American catastrophe that Boot and Brooks helped to deepen and prolong is that Americans can’t advance democracy in countries like Afghanistan, where so many are openly revolted by our presence, if we can’t even nurture it here at home.

HUFPOST : The stunning murders of two senior American officers within the high-security command and control center of the Afghanistan’s Interior Ministry, followed by the wounding of other American soldiers by a grenade thrown into a camp in Kunduz, is a bitter disgrace for the counter-insurgency strategy that Gen. Stanley McChrystal brought there in 2009.

It’s an even more bitter disgrace for that strategy’s “useful idiots,” propagandists such as Max Boot of the Council on Foreign Relations and David Brooks of Nowhere in Particular.

And for those of us who protested these people’s strange combination of credulity and duplicity three years ago, the sickening collapse of the American-led effort in Kabul is a bitter, disgusting sort of vindication.

In 2009, as I noted then, McChrystal’s new counterinsurgency strategy for Afghanistan overturned many doctrines the United States had brought to Iraq in 2003, and it expanded others developed after 2006.

The strategy’s celebrants, like Brooks and Boot, might as well have been wearing pom poms as they jumped out of their Army Humvees to “report” on carefully choreographed displays of the civic training and trust-building that buzz-cut G.I.’s were supposedly bringing to Afghans.

In truth, they were recycling premises and policies that had failed in Vietnam — “strategic hamlets,” “Vietnamization” of the war. They had failed even in the top-down art of America’s own “War on Poverty” — which Brooks and Boot had always disdained.

The biggest obstacle to the strategy in Afghanistan wasn’t American liberals’ failure of nerve, as conservatives seldom pass up a chance to insist. The biggest obstacle was the delusion that Americans could do for Kabul and Kunduz what we refuse to do for New Orleans or Detroit.

McChrystal’s 2009 “interim assessment” for the White House and his “counterinsurgency guidance” for American troops rightly rejected what Boot called the “conceit that an army can defeat an insurgency simply by killing insurgents.”

That had long been precisely the conceit of the neo-cons, but McChrystal and his apologists wanted to transcend both the war-mongering right and the social-welfare left by expanding a strategy to “embrace the people” in Afghanistan and be “a positive force in the community.”

The strategy would “use local economic initiatives” to displace the insurgency and to integrate “military, paramilitary, political, economic, psychological, and civic actions taken by a government to defeat insurgency.” But whose government? Anyone who wasn’t drinking this top-down, “can do” Kool-Aid knew that Hamid Karzai’s government was corrupt and feckless.

But these failures of the Bush administration’s militarized, free-market fundamentalism to win hearts and minds, let alone security or prosperity, either at home or abroad, only drove the desperate conservative leap to just the kind of social engineering they’d always warned against, including the lavish subsidizing of dubious characters posing as popular leaders. Remember “poverty pimps”? Suddenly, Boot and Brooks didn’t.

So here is Max Boot writing in the neoconservative Weekly Standard about his trip to Afghanistan in 2009:

“Next to the combat outpost is a brand-new district center built with foreign aid money. Inside we sit down to chat with the district governor, Mohammed Yasin Lodin, a natty man with frizzy black hair and a thin mustache, and the police chief, Colonel Amanullah, who is (unusually for an Afghan) clean shaven. Yasin is overflowing with praise for the improvements wrought by the Americans.

“The Americans later tell me that the governor… is doing a good job, spending far more time than he used to in the district (his family lives in Kabul) because it is now safe to do so… The Afghan soldiers and police also receive praise.” 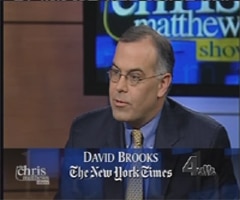 And here is David Brooks, in a New York Times column aptly titled “Combat and Community,” touting the Afghan National Solidarity Project, that helps “villages elect Community Development Councils. Western aid agencies give the councils up to $60,000 to do local projects, but it’s not the projects that matter most. It’s the creation of formal community structures. These projects are up and running in 23,000 villages.”

The results are “astonishing” and “surprising,” Boot claimed. But not as astonishing and surprising as the press releases and glowing reports coming from conservatives like Boot and Brooks that read like publicity for the inner-city programs Richard Nixon once derided for just “throwing money at problems.”

For McChrystal, such glowing reports were an adjunct to “strategic communications” essential to “policy development, planning processes, and the execution of operations.” He requested massive new resources to “fight corruption and improve the delivery of basic services such as clean water, paved roads, electricity, education, and a functioning legal system.” He wanted to raise Afghan government salaries because “the notoriously low wages…are a major inducement for corruption.”

War on Poverty strategists wanted all this, too. So do American local and state governments right now. But Republicans that Boot and Brooks have supported won’t give it to them.

McChrystal estimated that Afghanistan’s thirty million people needed 600,000 counter-insurgents, but he noted that there were “only 270,000 (170,000 Afghans, 64,000 Americans, 35,000 from other nations”). Yet Boot reassured readers that such things are “too intricate to be reduced to such back-of-the-envelope calculations. Unique local characteristics have to be taken into account.”

I remember arguments just like this for social-welfare spending in America in the 1960s. But in 2009 they sounded really strange coming from commentators who’d so recently told Americans to nerve up and meet savagery with savagery in Iraq and Afghanistan because, as Brooks put it, terrorists “create an environment in which it is difficult to survive if you are decent.”

By 2009, however, as Boot put it, “the old tactic of going into an area, killing some insurgents, and leaving was about as effective as ‘mowing the lawn’….Even more important is to provide durable security and some prospect of a better life to the population.” And Brooks enthused that while in Iraq “the good guys had only vague ideas about how to win this war, now they’re much smarter.” .

Are the pundits any smarter now, though? Have they learned that the cause of Americans’ acceleration of destruction in Iraq and Afghanistan wasn’t President Obama’s failure to commit enough resources to Stanley McChrystal’s war on poverty, and that it wasn’t even the Republicans’ refusal to commit them because they were hurtling manaically toward a half-trillion-dollar cut in defense spending.

The real problem was, and remains, that democratic solutions can’t be orchestrated or imposed by Central Command, or by Kennedy School power points, soft or otherwise, and or by a top-down War on Poverty. Obama, our Community Organizer-in-Chief, surely understands this better than McChrystal did after discovering “soft power” during a year at Harvard’s Kennedy School in 1997). Obama couldn’t tell us this truth politically, though, and McChrystal certainly couldn’t.

Boot and Brooks could have, but they were wedded to the Bush Administration’s National Security Strategy of 2002, which vowed to make the world safe for democracy in order to make it safer for America. It introduced unilateral, preventive war-making, for which the Yale historian John Lewis Gaddis found some dubious precedents , telling a Yale audience, “It doesn’t hurt to give history a little nudge now and then.”

Now history has nudged us back. Removing Saddam and his cadres and the Taliban in the ways that we did only left us owning something we’d broken. Hence conservatives’ desperation in 2009 not only to win savage battles but also, suddenly, to drain swamps of corruption and despair. But by then their own ideology had generated so many new swamps in America that it was hard to see how our own security and democracy could be strengthened by creating public jobs in Afghanistan as rising politicians such as Wisconsin’s Scott Walker were scheming to slash them here.

In 1965, as the American War on Poverty was getting underway, Lyndon Johnson warned that “You do not wipe away the scars of centuries by saying: ‘Now you are free to…choose the leaders you please.’ You do not take a person who, for years, has been hobbled by chains and liberate him, bring him up to the starting line of a race and then say, ‘you are free to compete with all the others,’….Ability is stretched or stunted by…. the poverty or the richness of your surroundings.”

That was too much for conservatives then and again in 2003, when they told Iraqis, “Now you are free to…choose the leaders you please.” Conservatives who changed their tune in 2009 to demand more resources for McChrystal’s war on poverty have discovered since then that, thanks in no small part to their ideology’s impact on voters and governance, the United States has its own corrupt warlords and predatory lenders, who turn real estate into unreal estate, savage the American dream of home-ownership, and curry public assistance for themselves while denying their workers basic security and training and giving them degrading distractions.

By 2009, as Boot and Brooks were touting McChrystal’s war, General John Shalikashvili, former chairman of the Joint Chiefs of Staff, and Wesley Clark, one of McChrystal’s predecessors as NATO commander, called attention to the high proportion of American youth unfit for military duty and described it as “a matter of national security.” That gives a new, ironic twist to Boot’s claim that “the most pressing problem for McChrystal lies not in Afghanistan…but inside the United States.”

A liberal capitalist society’s strengths depend ultimately on public virtues and beliefs that can’t be nourished or defended by either the liberal state and its armies or by the corporate state we’re becoming under the false banner of “free markets.” Strong citizens have to be nurtured on a balance of social provision and personal responsibility that conservatives no longer cultivate.

The lesson of the American catastrophe that Boot and Brooks helped to deepen and prolong is that Americans can’t advance democracy in countries like Afghanistan, where so many are openly revolted by our presence, if we can’t even nurture it here at home.

American conservatives have forgotten how, because they can’t reconcile their yearning for ordered, sacred liberty with their knee-jerk obedience to every whim and riptide of global finance capital and its degradation of public discourse. Boot and Brooks have been parties to degradation, no matter how ingratiating they’ve seemed, The revolt in Afghanistan is only the beginning of the push-back they deserve.

Jim Sleeper lectures in political science at Yale and posts frequently at TPM. He has been a New York newspaper columnist and is the author of The Closest of Strangers and Liberal Racism. His website is www.jimsleeper.com.