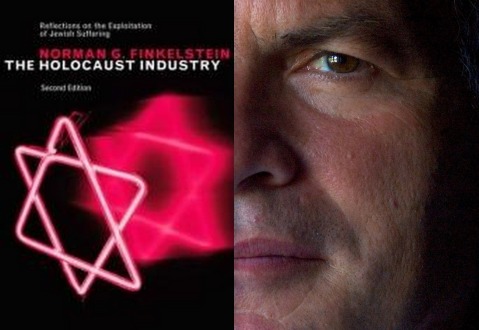 “A one-state solution will be a demographic suicide for the Israelis, no doubt about that. And Finkelstein, or the Jewish part of him, wants no a part in that gloomy scenario.”

“I’m exasperated with what I think is a whole lot of nonsense; this solidarity movement, namely “Boycott, Divestment and Sanctions”- BDS … it’s just a cult … they think they’re growing! … Well, they can’t even reach a public opinion. Let’s be honest … they want the end of occupation … they want the right of return for the Palestinian refugees … they want equal rights for the Arab Israelis … And they think they’re so clever, because you know what is the result of implementing the three tiers … there is NO ISRAEL”

…Those were the fiery words triggered at the BDS campaign not by some heavy weight Zionist bully, but, and to my own astonishment, Prof. Norman Finkelstein.

This is a very recent interview of Norman Finkelstein, filmed at the Imperial College London on Feb.9, 2012. Finkelstein is interviewed by a young pro-Palestinian activist, named Frank Barat, who obviously thought very highly of Prof. Finkelstein.

Never doubting where Finkelstein stood on the Israeli-Palestinian conflict, Mr. Frank kept a faint smile on his grateful face while nodding his head to everything Finkelstein had to say at the beginning of the interview.

But then, and bit by bit that smile began to fade away, only to be replaced by a slack-jawed gape of surprise, until the young gentleman almost fainted by the painful punches Finkelstein kept throwing at everything Mr. Frank and a whole lot of us knew was the right and righteous way, for a civil society, to fight the illegal Israeli “apartheid” and occupation of Palestinian land.

It’s obvious, Finkelstein had come to the interview with a premeditated intention to exploit the whole discussion and steer it his way. This was not yet another interview with Finkelstein, in which he would elaborate on his pro-Palestinian advocacy; rather it was the birth of a new stance for the man.

Wasting no time, and replying only to questions on his mind, Finkelstein began to elaborate on the one topic that seemed to have lately haunted him, namely the right of Israel to exist regardless of Tel Aviv’s continuing aggressive and expansionist policy, Israel’s apartheid and despite Israel’s disrespect for UN resolutions and international law- the same law Finkelstein adamantly refers to, in the video, as the unambiguous and clear arbiter on the Middle East conflict

Now, the term “paradigm shift” is used to suggest the groundbreaking importance of statements such as those issued by Prof. Finkelstein in his latest video.

The political science professor has made a career out of being the son of Holocaust survivors. And because of the very lessons his parents taught him and his two siblings, as he frequently declared in his lectures and discussions, he wouldn’t, and indeed couldn’t, be silenced by Israel over its crimes against Palestinians.

But that was Finkelstein we all knew and respected for the moral attitude he has publicly adopted since 1980s on the Palestinian issue, not to mention his scholarly method and bold personality.

But whoever appeared in that video is someone else; I personally had a difficult time recognizing him. Though the man in the video had the same looks, the same monotonous and loud voice and same defiant eyes of Finkelstein … but he was missing the rationale of good old Finkelstein.

This time Finkelstein talked only about Israel.

Of course he mentioned Palestine and Palestinians, but he talked not about the occupied Palestine, rather the incipient country that should respect the international law if one day her dream of statehood were to be realized.

He also did mention the Palestinians, but Finkelstein referred to them as some people, though suffered so long under occupation and ethnic cleansing, but also whom, he thinks, are reasonable enough to be willing to live with the status que- albeit unfair and painful.

Finkelstein in the interview was scared of the prospect, which is actually getting more than ever closer, of resolving the long conflict by enforcing a one-state solution. Finkelstein is no fool; he knows how that solution will eventually work out for the Israelis, exactly as it did for the Brits in South Africa.

A one-state solution will be a demographic suicide for the Israelis, no doubt about that. And Finkelstein, or the Jewish part of him, wants no part in that gloomy scenario.

Finkelstein slammed BDS campaign & any other pro-Palestinian movements, that promoted Boycotting Israel, for dragging the issue of equal rights for the Arab Israelis, aka Arabs of 1984 in Jerusalem to the public discourse. And he was totally pissed off by the idea/trend he nervously tossed this question back in the face of his interviewer

“ every country has its mistreated minority, why focus only on Israel’s minority groups, where the world is full with similar examples of discrimination, like the untouchables in India, to say the least of it.”

Well, I’m not going to expose the fallacy of comparing the situation of India’s untouchables to the Arab Israelis, for the untouchables in India is a primarily cultural thing that could get resolved over the years by more education and better social development but the inequality/apartheid in Israel is politically motivated by a highly developed racist/siege mindset which led the Zionists/settlers always to see themselves as victims even when they were killing other people.

There is a lot said in the video that we could argue against, but what really grabbed my attention was Norman Finkelstein himself and his sudden change of heart, or apostasy if you like.

Some will argue that he never changed; rather he only made it clear where he stood on the issue of Israel’s right to exist.

But this is not how I see it, Finkelstein is a smart man and a renowned intellectual who never shied away from picking a fight with Israel’s backers, and who unabashedly defended the rights of Palestinians whom he envisioned as the tyrannized indigenous people being systematically cleansed from their native land.

So, what exactly happened that made this American Radical denounce his 30 years of courageous battles against the Israeli Holocaust Industry.

Has Prof. Finkelstein finally flinched? Has he capitulated to the global Zionist machine?

I personally don’t like to be rushed into assuming that he did, meanwhile, I believe we could detect a hint of a clue in Finkelstein’s own words as he concluded his interview saying “I’m 59 years old, I’ve been involved in this for 30 years …, I gave my life to the cause … I’m not wasting time anymore. I’m tired of it … I lost patience with it.”

Maybe Finkelstein has definitely proved himself, over the last thirty years, to be a tough fighter and a stubborn opponent to Israel’s expansionist and apartheid policy in Palestine and the Middle East, but throughout the lapsing years as he was busy caught up in his crusade he never bothered with, the now incessant question “How will the world, and specially the Israelis, remember him after he dies?”

This might have seemed a silly and rather insignificant question some twenty years ago, but for a 59 years old man, and who at the end of the day is seen as a member, albeit a renegade, of a Jewish family his position on the right of Israel to exist needed a clear cut clarification on his behalf.

Finkelstein in the video is saying one thing; though he has practically spent all of his life fighting on the Palestinian side he certainly wouldn’t like to be remembered as an anti-Semite who advocated Israel shouldn’t exist. Though he never said that outright, but come to think of it, I wonder if a twelve- minute-video will ever be enough to redeem the American radical of thirty years of anti-Israeli heresy.

In other words, how big a chunk of his legacy Prof. Finkelstein is willing to throw away to ease his guilty conscience?

For more posts by Dr. Ashraf Ezzat visit his website.