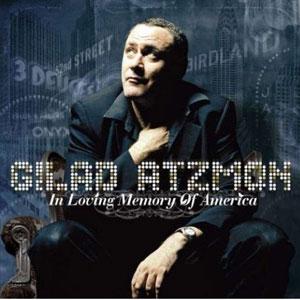 (Gilad Atzmon will be speaking at the University of Wisconsin Madison tomorrow, Friday, March 9th, in 1111 Humanities, 7 to 9 pm. Musical festivities afterward.)

Gilad Atzmon is one of the sweetest, funniest, most charming and likable people I’ve ever met.

He’s also one of the world’s best saxaphone players. Gilad’s music is not only gorgeous, but uncommonly accessible for music in its class.

His writing, which includes two novels, a nonfiction book, and countless essays, is grounded in the highest humanistic ideals, invigorating laughter, and an irrepressible joie de vivre.

So why is he hated so much?

Why are his appearances protested by angry picketers? Why is the most vicious and mendacious kind of calumny being hurled at him in such quantities? Why is there an organized effort to make this gentle, loving free spirit out to be some kind of deranged Nazi?

His detractors say his writing invites it. But they’re wrong. The proof is that the anti-Atzmon brigade has to resort to lies (or to be charitable, gratuitous distortions) to make him look bad.

There must be some deeper reason why they hate him.

Maybe it’s because he’s such a powerful symbol of – and argument for – the end of Zionism.

Gilad Atzmon grew up in Israel in a Jewish family that included Holocaust survivors. He fell in love with jazz as a teenager, so when it came time to serve in the IDF he joined a military band. During his IDF service, Gilad awakened to the horrors of Zionism and its brutality toward Palestinians. Shortly after leaving the IDF, he also left Israel and never returned.

Now London-based, Gilad Atzmon is considered one of Europe’s top jazz musicians – and, increasingly, its leading ex-Israeli anti-Zionist voice. He has published two acclaimed novels, and his new book The Wandering Who? has endured vicious attacks, smear campaigns, and boycotts by such Zionists as Alan Dershowitz, and is becoming a worldwide bestseller.

In all of this, Gilad Atzmon is quite the anti-Zionist success story. His creative output, both musical and verbal, challenges arbitrary boundaries and celebrates freedom. (Jazz, the greatest art form America ever produced, is at its root a celebration of musical freedom by once-enslaved African-Americans.)

Today, more and more Israelis are lining up to get second passports and asking themselves, “Is there life after Zionism?” Gilad Atzmon offers a perfect example, with plenty of supporting arguments, of how ex-Zionist Israelis can liberate themselves from the shackles of a brutal, abusive, and ultimately doomed ideology and identity.

So that’s why they hate him. He’s the walking, talking, saxaphone-blowing embodiment of the joy of life after Zionism.

You see, most of the people who hate Gilad are radical Zionists; all (including the handful of “pro-Palestine” phonies) are prisoners of Zionist ideology. They have been trained to heap mountains of hate on anyone who crosses the one meaningful line in the whole Israel-Palestine debate: The line that separates those who support or accept the existence of a “Jewish state” in Palestine from those of us who do not.

As Norman Finkelstein inadvertently pointed out, Israel – despite its horrendous human rights record – is not going to be changed by people focusing on ephemeral abuses of human rights. The Zionists (like Finkelstein) will simply respond, “There are, and have been, human rights abuses elsewhere that are just as bad; so anybody who focuses on Israeli human rights violations must be an anti-Semite.” (Most murderers don’t get off by pleading to the judge that someone else committed an equally bad murder; but we’ll let that slide.)

Chris Hedges might respond to Finklestein that nowhere else do army snipers lure children into range of their guns, then gut-shoot them for sport; and British Medical Journal might add that the more than 600 children sport-shot during the interval they examined, who were essentially hunted and killed for fun by IDF soldiers as a de facto national policy, died from a specific and horrific type of human rights abuse that has never been seen anywhere else. But these events will be buried by the Zionist-dominated media; and no matter how horrific the abuses, there will always be different sufficiently revolting examples of inhumanity from other times and places to relativize the Israeli atrocities.

There is only one argument the Zionists cannot possibly win: The argument over whether there should be a “Jewish state” in Palestine in the first place.

Defenders of this bizarre notion must argue that it is perfectly fine for a religious-ethnic group to invade and occupy another group’s land, halfway across the world, on the basis of the aggressor group’s ancient mythology. And that it is perfectly fine for the aggressor group to dispossess and destroy the people living on that land, and to create an ethnic-specific apartheid system under which the invaders are first class citizens, while the victims are either second-class citizens or permanently exiled from their homeland.

Obviously, any and all “invade-and-occupy-our-mythological-ancient-homeland” projects are equally indefensible and equally insane.

It must be ended.

This is the bottom line. This is the line that all the Zionists, from right-wingers like Netanyahu to left-wingers like Chomsky and Finklestein and Amy Goodman and Matt Rothschild and Michael Lerner and Rob Kall and Chip Berlet and all of the hundreds of other Zionist gatekeepers that dominate the “alternative” as well as mainstream media DO NOT WANT YOU TO CROSS. These are the Police Lines that the Zionist thought police have erected, and are working overtime to maintain.

Because if you ask that one little simple question – “is the Zionist project, and the Israeli ‘nation,’ legitimate in the first place?” the whole thing crumbles to dust and ashes.

That’s the real reason the Zionists want to nuke Iran. The Iranian government is the only government in the Middle East to have, as its official policy, exactly the same position as the vast majority of the people of the Middle East: The Zionist entity in Occupied Palestine is not, and never will be, legitimate; and it must be ended, preferably by nonviolent means, as soon as possible.

And that’s why the Zionists are getting more and more hysterical in their denunciations of “delegitimizers.” (How can you delegitimize something that was never legitimate in the first place?)

And that’s why they’re hate-swarming all over Jenny Tonge, who correctly pointed out that Israel won’t last forever.

And that’s why they hate Gilad Atzmon. Not only is Gilad forthrightly anti-Zionist, thereby showing the “peacenik Zionist” phonies up for what they are; but he is also fearless in his analysis of the way Jewish identity politics fosters the delusion that Jews are an “exceptional people” who should be allowed to do things to Palestine that no other ethnic/religious group would ever be allowed to do to its mythological ancient homeland across the seas.

Worse: The guy expressing these taboo but obviously-correct views, and setting such a beautiful example as an ex-Israeli anti-Zionist, is an energetic and fabulously talented Renaissance man – a superb musician and writer and mesmerizing public speaker. This must gall the Zionists to no end.

No wonder they hate Gilad Atzmon.

Maybe someday, when they get tired of hating, they’ll drop their Zionism (itself an ideology of hatred, starting with self-hatred) and embrace the love, joy and liberation Gilad embodies so beautifully.