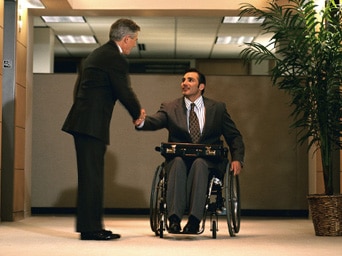 The month of February brought some good news: The unemployment rate for Veterans of the Iraq and Afghanistan era dropped to 7.6 percent, down from nearly twice that last year. In a watershed moment, the Veteran unemployment rate has dipped below the general population, which is at 8.3 percent:

Statistics from the Bureau of Labor Statistics show that more veterans of the Iraq and Afghanistan era than ever before are working in the civilian sector, up nearly 220,000 since the end of 2011. Today, nearly 1.9 million of those veterans hold private sector jobs, a number expected to rise as more troops leave the military in coming years.

For all [generations of] veterans, the unemployment rate dropped to 7 percent in February, the lowest that mark has been since December 2008. Almost all of the increase in veteran employment came from the new jobs for post-9/11 veterans.

The numbers come at a time of an economic upswing, so it’s not a big surprise to see more Vets finding jobs alongside civilians. The concern of many has been that Veterans may be disadvantaged in the job hunt, which is something we’ve covered before. The numbers show a promising reverse of that idea, at least for the moment.

Of course, unemployment numbers can carry statistical errors, and Veterans make up a small pool of respondents to polls, which can make broad predictions difficult. As the Army Times reported early today, anomalies are possible. However, the numbers have dropped consistently since December, not just this month.

Good news sometimes comes with a caveat, and for Veteran unemployment, it’s this: Even if the number is accurate, it’s still too high. We have highly trained, motivated, and disciplined folks rotating out of the military, ready for the next challenge, only to land in the unemployment line.

VA has committed to continue increasing Veteran employment in our own workforce, and employs over 100,000 Veterans today. VA has also put on hiring fairs for Vets to find both private and public sector jobs and hosts an annual conference for Veteran business owners, The White House has tackled the issue with its plan for a Veterans Job Corps and many promising initiatives, such as tax breaks for companies that hire Veterans. The White House Joining Forces initiative, led by First Lady Michelle Obama and Dr. Jill Biden, has challenged and mobilized the private sector to increase Veteran hiring. But we still have a long way to go, and these promising signs are no reason to let up on the message that Veterans are good for business, or that the issue is no longer a big deal. Veterans deserve a meaningful career after service, and it’s incumbent on anyone who can help to make that a reality.