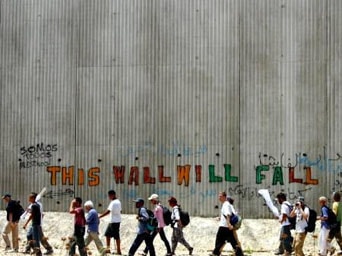 “When I come here and see the situation here, I find that what is happening here is ten times worse than what I had experienced in South Africa. This is Apartheid.”- Arun Gandhi, after his 2004 visit to The Holy Land.

This week in Bethlehem, the second international Christ at the Checkpoint Conference concluded with a “major breakthrough in the evangelical world” and was attended by over 600 Evangelical Palestinian Christians, Christian Zionists and Messianic Christians.

Also this week, peace and justice activists in Johannesburg concluded a week of programs highlighting the similarities between the Apartheid regime in South Africa and that of Israel.

Learn More about that @

Israeli Apartheid Week is a global annual international series of events held in cities and campuses with the goal to educate people about Israeli Apartheid and because ‘it’s always about the money’ to build Boycott, Divestment, and Sanctions campaigns.

Last year, Israeli Apartheid Week took place in more than 40 cities across the globe and the good news is that over 100 participated this year!

When it came to South African Apartheid, the US was one of the last to get on-board and only did so when President Ronald Reagan was forced to sign a Comprehensive Anti-Apartheid Act “because the citizens’ movements in the United States had so effectively turned around United States politics that the Republican senators were telling him that it was in the interest of the Republican Party to sign.”

Last week in D.C. thousands of US Christians united with Jewish AIPAC supporters who converged on the Capitol to lobby Congress in support of the state of Israel and push America into war with Iran.

The Christians who attended the “Christ at the Checkpoint” conference sought to answer, “How should Christ followers respond to this political, multi-faceted conflict?”

They desired “to promote awareness, a message of unity, and contribute to peace and justice for all of the world’s inhabitants. [With] hope to be challenged and to challenge the global church on its moral, ethical, and prophetic responsibility.”

In 1948 there were 29,000 Palestinian Christians living in the land many call Holy but because of The Christian Exodus, they number less than 10,000 today; not because of Judaism or Islam, but because of a brutal and illegal military occupation that denies their human rights and prevents them from reaching their jobs, land, holy sites and families which have been separated by Israel’s wall.

During the conference, the Mayor of Bethlehem, Victor Batarseh, spoke about the Apartheid Wall and other “walls in this world – walls of religion, race, gender… we want to break down all the seen and unseen walls in the world. [he thanked the delegates for] breaking down the wall – not physically, but psychologically [and continued] we live in a big prison in this city but as Muslims and Christians we always have hope” and he concluded by saying that “with your help we can achieve peace.” [3]
The first time I met Mayer Batarseh was when he traveled to Florida in 2005, to meet with Mayor Buddy Dyer, with the hope to re-ignite The Twinning Agreement that was signed in May 2001 by the then Mayors of Bethlehem and Orlando.

The Twinning Agreement is a sister-pact that affirmed Orlando and Bethlehem would encourage tourism to the other and promote a global community. I followed up on Mayor Batarseh’s visit with my own visit to Mayor Buddy Dyer’s office one week after the Mayors had met.

I informed the Orlando Mayor’s public relations representative about an opportunity to help the city of Bethlehem and was seeking the Mayors support in getting the word out about two events that were already scheduled and my involvement with Palestinian Children’s Welfare Fund, who imported goods crafted by the artisans in Bethlehem that volunteers sold throughout the world. We returned 100% of all proceeds back to the crafts people and any remaining went to help support the children who endure in the refugee camps of the Holy Land.

Mayor Buddy Dyer did not even have the common courtesy to respond to any of my three follow up emails and multiple phone calls.

I also informed The Orlando Sentinel about the opportunity for the Central Florida community to do something to make true the words of the Twinning Agreement without traveling all the way to the Little Town of Bethlehem in occupied territory.

I got nowhere, but I keep writing about it because the proverb is; ‘if you want to change the world: WRITE!’

In 2006, while I was in Bethlehem I again met Mayor Batarseh and he told me:

“When the occupation is ended there will be peace. If the world boycotted Israel for six months they would comply with the UN Resolutions which is all we want! There is state terrorism and Israel must be forced to recognize our right to exist. For the past ten years Hamas has worked with and helped the poorest of people, they have built schools and orphanages. The PA took the money but Hamas was providing the social services!

“Israel is a state built on religious beliefs. The US and EU and all the free world are against theocracies. But Israel has the right to do anything! The world needs to WAKE UP! If there is no peace in the Holy Land there can be no peace anywhere. End the occupation and there will be peace the very next day. All the terrorism in the world can be traced back to the Palestinian situation. All the money spent on weapons and war could eliminate world poverty.” [4]

There can be no peace without justice and there is no justice without accepting the truth.

There is more than enough blame to be shared by all but playing that game- as well as living in the past- has got no soul!

For this American struggling Christian Anarchist and candidate for US HOUSE of Representatives, who seeks to change US foreign policy and challenge all Christians, I propose believers and unbelievers would do well to consider just WHO their Jesus is.

The gospel [which means good news] that Jesus preached, was very political and a direct challenge to the politically powerful, arrogant, self-satisfied and self-righteous.

Two thousand years ago the Cross had NO symbolic religious meaning and was not a piece of jewelry.

Jesus was never a Christian, for that term was not even coined until the third decade after his crucifixion.

Jesus was born, lived and died a devout Jewish nonviolent Palestinian whose last message to his community was “Put down the sword!”

In the latter days of Nero’s reign [54-68 A.S.] through the domination of Domitian [ 81-96] Christians were persecuted for following the nonviolent, loving and forgiving Jesus.

That Jesus was first left behind when Augustine penned The Just War Theory.

Augustine was the first Church Father to consider the concept of a Just War and within 100 years after Constantine, the Empire required that all soldiers in the army must be baptized Christians and thus, the decline of Christianity began.

With the justification of war and violence supplied by Augustine’s Just War Theory, wrong became right. Nothing much has changed in two millennial, for in today’s Orwellian world politicians claim the way to peace is through war and that nuclear weapons provide protection.

The first mention of Israel in the Bible is in Genesis 32, when Jacob wrestled, struggled and then clung to the Divine Being and was then renamed Israel. I contend that ANYONE who does the same is that Biblical Israel too!

In 2006, Israel’s Nuclear Whistle Blower, Mordechai Vanunu issued this invitation to Hillary Clinton and all US Christians:

I am Eileen Fleming for US HOUSE of Representatives 2012 and I approve of this-and all of my messages.