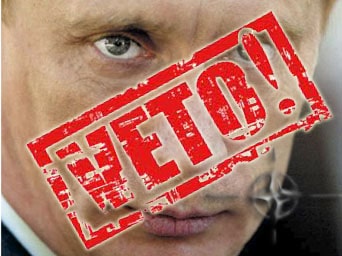 He will be the devil of choice because there could not be a more formidable opponent in the world stage to Washington’s plans – be they coded as Greater Middle East, New Silk Road, Full Spectrum Dominance or America’s Pacific Century.

Ladies and gentlemen, let’s get ready to rumble…

March 08, 2012 “Asia Times” – -Forget the past (Saddam, Osama, Gaddafi) and the present (Assad, Ahmadinejad). A bet can be made over a bottle of Petrus 1989 (the problem is waiting the next six years to collect); for the foreseeable future, Washington’s top bogeyman – and also for its rogue North Atlantic Treaty Organization partners and assorted media shills – will be none other than back-to-the-future Russian President Vladimir Putin.

And make no mistake; Vlad the Putinator will relish it. He’s back exactly where he wants to be; as Russia’s commander-in-chief, in charge of the military, foreign policy and all national security matters.

Anglo-American elites still squirm at the mention of his now legendary Munich 2007 speech, when he blasted the then George W Bush administration for its obsessively unipolar imperial agenda “through a system which has nothing to do with democracy” and non-stop overstepping of its “national borders in almost all spheres”.”

So Washington and its minions have been warned. Before last Sunday’s election, Putin even advertised his road map The essentials; no war on Syria; no war on Iran; no “humanitarian bombing” or fomenting “color revolutions” – all bundled into a new concept, “illegal instruments of soft power”. For Putin, a Washington-engineered New World Order is a no-go. What rules is “the time-honored principle of state sovereignty”.

No wonder. When Putin looks at Libya, he sees the graphic, regressive consequences of NATO’s “liberation” through “humanitarian bombing”; a fragmented country controlled by al-Qaeda-linked militias; backward Cyrenaica splitting from more developed Tripolitania; and a relative of the last king brought in to rule the new “emirate” – to the delight of those model democrats of the House of Saud.

More key essentials; no US bases encircling Russia; no US missile defense without strict admission, in writing, that the system will never target Russia; and increasingly close cooperation among the BRICS group of emerging powers.

Most of this was already implied in Putin’s previous road map – his paper A new integration project for Eurasia: The future in the making. That was Putin’s ippon – he loves judo – against the North Atlantic Treaty Organization (NATO), the International Monetary Fund and hardcore neo-liberalism. He sees a Eurasian Union as a “modern economic and currency union” stretching all across Central Asia.

For Putin, Syria is an important detail (not least because of Russia’s naval base in the Mediterranean port of Tartus, which NATO would love to abolish). But the meat of the matter is Eurasia integration. Atlanticists will freak out en masse as he puts all his efforts into coordinating “a powerful supranational union that can become one of the poles of today’s world while being an efficient connecting link between Europe and the dynamic Asia-Pacific Region”.

The opposite roadmap will be Obama and Hillary’s Pacific doctrine. Now how exciting is that?

It was Putin who almost single-handedly spearheaded the resurgence of Russia as a mega energy superpower (oil and gas accounts for two-thirds of Russia’s exports, half of the federal budget and 20% of gross domestic product). So expect Pipelineistan to remain key.

And it will be mostly centered on gas; although Russia holds no less than 30% of global gas supplies, its liquid natural gas (LNG) production is less than 5% of the global market share. It’s not even among the top ten producers.

Putin knows that Russia will need buckets of foreign investment in the Arctic – from the West and especially Asia – to keep its oil production above 10 million barrels a day. And it needs to strike a complex, comprehensive, trillion-dollar deal with China centered on Eastern Siberia gas fields; the oil angle has been already taken care of via the East Siberian Pacific Ocean (ESPO) pipeline. Putin knows that for China – in terms of securing energy – this deal is a vital counterpunch against Washington’s shady “pivoting” towards Asia.

Putin will also do everything to consolidate the South Stream pipeline – which may end up costing a staggering $22 billion (the shareholder agreement is already signed between Russia, Germany, France and Italy. South Stream is Russian gas delivered under the Black Sea to the southern part of the EU, through Bulgaria, Serbia, Hungary and Slovakia). If South Stream is a go, rival pipeline Nabucco is checkmated; a major Russian victory against Washington pressure and Brussels bureaucrats.

Everything is still up for grabs at the crucial intersection of hardcore geopolitics and Pipelineistan. Once again Putin will be facing yet another Washington road map – the not exactly successful New Silk Road (See US’s post-2014 Afghan agenda falters, Asia Times Online, Nov 4, 2011.)

Ant then there’s the joker in the pack – the Shanghai Cooperation Organization (SCO). Putin will want Pakistan to become a full member as much as China is interested in incorporating Iran. The repercussions would be ground-breaking – as in Russia, China, Pakistan and Iran coordinating not only their economic integration but their mutual security inside a strengthened SCO, whose motto is “non-alignment, non-confrontation and non-interference in the affairs of other countries”.

Putin sees that with Russia, Central Asia and Iran controlling no less than 50% of world’s gas reserves, and with Iran and Pakistan as virtual SCO members, the name of the game becomes Asia integration – if not Eurasia’s. The SCO develops as an economic/security powerhouse, while, in parallel, Pipelineistan accelerates the full integration of the SCO as a counterpunch to NATO. The regional players themselves will decide what makes more sense – this or a New Silk Road invented in Washington.

Make no mistake. Behind the relentless demonization of Putin and the myriad attempts to delegitimize Russia’s presidential elections, lie some very angry and powerful sections of Washington and Anglo-American elites.

They know Putin will be an ultra tough negotiator on all fronts. They know Moscow will apply increasingly closer coordination with China; on thwarting permanent NATO bases in Afghanistan; on facilitating Pakistan’s strategic autonomy; on opposing missile defense; on ensuring Iran is not attacked.

He will be the devil of choice because there could not be a more formidable opponent in the world stage to Washington’s plans – be they coded as Greater Middle East, New Silk Road, Full Spectrum Dominance or America’s Pacific Century. Ladies and gentlemen, let’s get ready to rumble.

Pepe Escobar is the author of Globalistan: How the Globalized World is Dissolving into Liquid War (Nimble Books, 2007) and Red Zone Blues: a snapshot of Baghdad during the surge. His most recent book, just out, is Obama does Globalistan (Nimble Books, 2009). He may be reached at [email protected]

Escobar: Putin not part of NWO, labelled evil by elites

Asia Times correspondent Pepe Escobar says that despite the Russian people making their choice clear, the U.S. is still on a mission to vilify the country…