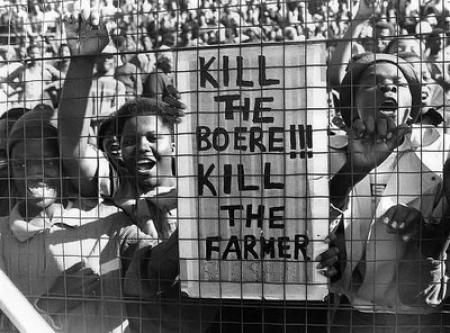 With the growing technology, the fighting of African warfare has changed dramatically since 1961. The days of dropping flyers from a military airplane and TV advertisements has gone far beyond population visibility.

The latest trends in Africa are moving towards the use of “law-Manipulation” techniques and technologies that bypasses the war treaties incorporated by the United Nations since 1947.

A new motto has recently arisen in the South African ruling government party, the ANC, “We fight apartheid by the Law and not by force, and we will change the rule to Black Empowerment law and implement laws to rule”.

The ANC is an organization once labelled as a terrorist organization by the US and considered an ally today of the same. Very few are aware of the implications this slogan might have and will have in the future.

For example the use of Black empowerment laws, better known as BEE or even BBBEE law imposed by parliament, is creating new psychological warfare mechanisms to make an impact on the minority of the country without the use of the word apartheid.

South Africa is a country with strong former apartheid laws and with such a background it should technically move away from any such division growth strategies in its population.

An alarming figure of approximately 3200 white farmers that was verified and published by the Freedom Front Plus*, a political party that represents the minority of white people, were murdered since 2003 and South Africa was placed on the international genocide list** during 2011 last year.

[Editors Note: My apologies to all with sensitive stomachs but Kevin’s article today triggered my going back into my photo archives. We are not shock jocks here at VT, but this story, and virtually all images like these below are literally banned some American media because the victims and perpetrators are not of a suitable color. If the situation were reversed you would have heard plenty about it.

The UN is also generally quiet about this, as Africa in general prefers this ‘situation’ stay swept under the rug. The result of course, is that any mention of something like this ‘possibly happening’ is immediately denounced as hysterical white racism.

I have spared you the photos of the children as they are too distressing to look at. I hate to look at them. It spoils my whole day and I have much to do this Saturday. The following images are mine, not Kevin’s, and I take responsibility for showing them to you. All complaints sent to me, please…Jim W. Dean]

New Psychological warfare mechanisms can also been seen in Syria and the recent Egyptian uprisings. These new methods bare a similar footprint, and it could be assumed that such technologies are perhaps shared by some to gain personal powers that be.

A deeper study is necessary and the UN should perhaps look at updating their rules and laws of membership.

The public has become more vulnerable and the use of their reptilian instinct is becoming exceedingly vulnerable.

We could argue that terrorism is spreading in the mind space of populations and terror attacks are just as effective via the TV and media as in the public domain.

Even more so with the use of legal apparatus; such as the laws that are commonly attacking the psychology of the masses by means and reductions of breaking the mental state of any minority population.

Open source intelligence (OSINT) information indicates that Africa is the leader of such experimental exercise studies of psychological warfare. There are three basic identifiable phases to this structure firstly, the Implant of the Psychological Virus, secondly the growth mutation and lastly the result.

The only problem we will face in the next 3 decades or more is the final results of the endless last phase. The last phase is the concern. What will it mutate to?

Nobody really knows as it is unpredictable. Some might argue and say that the results are to fight the issue of terror however this cannot be turned off by a switch.

The complexity theory surrounding such CI activity is far more complex than previously thought by great psychologists of the 21st century.

We can see the immediate result with a 15 year period however; psychological warfare impact on the mass can stretch over decades or more.

An additional risk we face is that no government is shielded by this even though some are using such techniques already.

The system of physiological warfare technology is a mutation in itself and therefore the discovery of a new link to the information tree could be in any hands outside any authority at any point in time.

Al-Qaeda is a good example of keeping up to date with this technology. On an analytical note we should look closer at why for example Al-Qaeda has such a strong impact. Yes it is a militant Islamic movement, but that what makes it grow and mutate is of far more importance than the means used to use counter inelegance as a decor.

Who is the enemy and is the 5WH technique outdated or have we entered a new dimension of producing effective psychological warfare results and poling systems. Can poling be shifted by means of an effective “viral” campaign and can masses effectively be utilized to make such shifts. Absolutely Yes is the answer.

Military warfare accounts perhaps only for as low as 1/3 of any warfare today. A quote from Rockefeller once uttered,”All one has to do is to shock people and they will flock like sheep in one corner.”

Based on corporate business intelligence any company with the right mechanisms can technically be a treatise to such shifts. The need for Capital is the least to make it happen.

In other words, the internal espionage threat level is now higher than ever before since technologies, for example the internet, have far more implication than before. Roughly 1 third of the world uses the internet in less than a decade.

Information travels faster than the speed of light and therefore psychological warfare on the internet is developing into the latest threat to all security.

[Editors Note; We have all heard about the Texas car dragging death of the unfortunate black man, the result of a drug debt dispute among some ex-convicts. But we have not heard about ones like this below. Again, the victim in not the right color. As our Gordon Duff so often writes, “Welcome to that world,’ to which I might add, ‘Welcome to this world.’…Jim W. Dean]

Freedom Front Plus references and comments on Farm attacks:
ATTENTION READERS
Due to the nature of independent content, VT cannot guarantee content validity.
We ask you to Read Our Content Policy so a clear comprehension of VT's independent non-censored media is understood and given its proper place in the world of news, opinion and media.