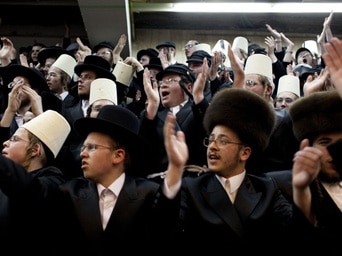 Purim, a major Judaic celebration each year at this time was hailed big time by Pastor Lon Solomon of the massive Mclean Virginia Bible Church. Charles Carlson’s quiet demonstrators were on hand to point a glaring finger of truth at the beltway oxymorons.

Those of us who support Carlson’s ‘Straightgate Ministries’ received his newsletter telling about the event. Most of the letter follows:

Six men, one woman and one excited teenager challenged the leadership of McLean Bible Church on Sunday, March 4, in the affluent suburb of Mclean, Virginia. The church claims over 13,000 regular attendees at three consecutive services. Its website lists a staff of 74, each of whom received two letters in advance of our visit. Attendees park in a two-story concrete garage that holds over 1500 cars; four off-duty policemen direct traffic.

Our vigils are organized, but in no way resemble mass demonstrations. Rather, like Jesus at the Temple of Herod, we go alone or with a few friends, with a firm message. We were large enough in number at McLean to display a uniform message of peace to everyone who gave us one glance. Many try not to look, but few can force themselves not to read the large display messages out of the corner of their eye:

JESUS DEMANDS THAT YOU SEEK PEACE. WHY ARE YOU NOT DOING SO?

We do not expect many people to stop and thank us for being there, but a few did. One told us that in Pastor Solomon’s message to his huge audiences, he said of us, ”They are wrong, we are not in favor of war on Iran…we do not support all of Israel’s acts.” Two members, one of whom was with our vigil, told us the church has many wonderful people, but they are prompted to support wars. One said, “I have heard the full auditorium cheer when someone talks about the need for war against Iran.”

Like most “Messianic Christians” (former Jews), Lon Solomon plays at being both a Jew and a Christian. He mixes a dash of Talmudic Judaism into his “Christian” sermons, references to the book of Esther, for example. It is not coincidental that, as reported in The Atlantic, Israeli President Benjamin Netanyahu presented U.S. President Obama with a copy of the book of Esther, a reminder to the President that, according to Hebrew legend, the Persians (today, Iranians) were massacred by the Israelites (called Jews in the book of Esther), a massacre that is celebrated as the festival of “Purim” at this time of year.

But Purim is a feast that celebrates the murder of innocents found in a book (Esther) that does not mention God. What would Jesus say to that?

The Esther story tells us, “Thus the Jews smote all their enemies with the stroke of the sword and slaughter, and destruction, and did what they would unto those who hated them.” (Ch9-5) It seems the “Jews” (a word not used at the time) were living in the land of the Persians and discovered a plot against them by Haman, the King’s Minister, against whom they counter-plotted, including prostituting Esther to the king. According to the 9th chapter of this book, Esther beguiled the King to hang Haman for his ill intent against them, and then to hang Haman’s ten sons in vengeance for their father’s conspiracy. The verses do not say what they did to Haman’s wife and daughters.

Knowing how Israelis think about the lives of their “enemies,” it does not surprise that Mr. Netanyahu gave this book of Esther to our President as his gift. Today’s Iranians descend from the Persians of the Bible; Netanyahu wants Obama to know that Israel will settle for no less than another slaughter of these “enemies.” Is Netanyahu seducing Mr. Obama to do the dirty work, as Esther seduced the king? The Purim festival celebrates the massacre again today and tomorrow, March 8 and 9.

Pastor Solomon teaches in his sermons that Haman was “cursed by God.” He does not care that the name of God by any name is not mentioned even once in the bloody book of Esther. As I asked Solomon in my letter to him, what civilized people would hang the children of an enemy and then make a national holiday around the event?Present day Israelis daily starve or kill outright Palestinian children; they suffer no guilt or shame.

Only those, like Lon Solomon, who revere Israel and don’t hear the words of Christ, are inclined to honor Purim. Pastor Solomon describes himself as a former and current Jew. He also claims to be a Christian. He may have no problem celebrating Purim, the Jewish massacre of innocents, in March, and celebrating Easter, the resurrection of the Prince of Peace, in April! Should not those who follow Christ reject those who celebrate mass murder? Mr. Netanyahu will not care if we point out that the name of “God” in any form is absent from the entire book of Esther. But “Pastor” Solomon should care!

As we said in a prior paper, AIPAC Presses Congress for War; Zionist Christians Have the Votes, the book of Esther and the celebration of Purim is good reason to understand why Talmudic Judaism plus Jesus does not equal Christianity, as Messianic Christians like Lon Solomon would like us to believe. On the contrary, Judaism is corrupted Israelite-ism as Jesus faced it. It is corrupted by 30 or 40 books called the Talmud, with entangled rules that no one can understand.

Christ Followers believe this corruption is why God sent Jesus.

For the last 104 years, traditional Christianity has also been corrupted by the 1908 Scofield Reference Bible footnotes, and by many other books written by various men. Corrupted “Israelite-ism” plus corrupted “Christianity” as combined in the Messianic Christian church by Pastor Solomon cannot produce truth. This is why Project Strait Gate has challenged McLean Bible Church, and will be back to do it again.

A recent poll by The Hill found that 49% of Americans likely to vote think war on Iran is justifiable to keep it from getting nukes. All AIPAC has to do is convince a majority that Iran is trying to get fuel for nuclear weapons, and war against Iran will have the support of a simple (simpleton?) majority.

Who are these warring 49%? You may depend upon this: the majority is influenced by thousands of Christian Zionists churches like this McLean mega-church pastored by a “Messianic” Jew. So far Project Strait Gate has reached about 80 of these churches. Many more are hearing about our vigils, thanks to our friends. Join us!
(End of letter, all emphasis was added by me.)

Beware the leavening of the Pharisees! Hmmm what did He mean? Once again here is Carlson’s excellent teaching video: