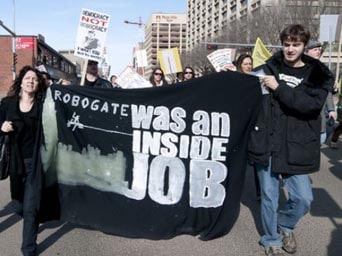 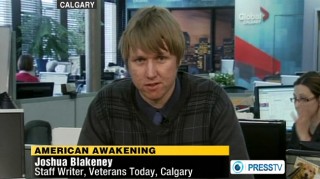 Joshua Blakeney has spent the last few years working, along with many hard-working activists, to pressure Canadian law enforcers to uphold Canada’s Crimes Against Humanity and War Crimes Act.

Now the official position of Canada’s opposition party, the NDP, is that Bush/Cheney are inadmissible to Canada under Canadian law.

Finally, Cheney has decided not to visit Canada:

by Joshua Blakeney for Press TV

Below is his  first report for Press TV.

Thousands of Canadian’s have taken to street to demand a full public inquiry into the recently revealed ‘Robocalls’ scandal that influenced the 2011 Canadian Elections, Press TV reports.

Protesters gathered in cities across Canada on Sunday to demand a full public inquiry into the mysterious automated phone calls directing voters to fictional polling stations during the last year’s election.

Elections Canada has launched an investigation into the suspicious calls after receiving a more than 30,000 complaints. Many have testified that the Robocalls came from companies with ties to the Conservative party that won the election.

The largest turnout seemed to be in Toronto, where up to 1,000 people attended the march, a Press TV corespondent reported.

This is not the first time in Canada, ‘Elections Canada’ a non-partisan agency that monitors and enforces electoral legislation, has been compelled to investigate Canada’s Conservative party.

In February 2011, they pressed charges against four Conservative Party senators who had led Canada’s Prime Minister Stephen Harper electoral campaigns in 2006 and 2008. The Conservatives pleaded guilty in court and paid a fine of USD 52, 000.

Harper and his senior campaign team have denied any involvement in the Robocalls scandal and so far no evidence has emerged publicly to suggest their involvement.