Born in a military hospital in South America, Immortal Technique was brought to the United States in the early 80s while a civil war was breaking out in his native Peru. The US supported puppet democracy and Guerilla factions were locked in a bitter struggle that ended as most do in Latin America, with the military and economic aid of the State Dept. through channels like the CIA. 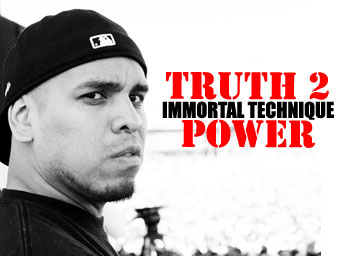 Although he had escaped the belligerent poverty and social turmoil of life in the 3rd world, he was now residing in Harlem which had its own share of drama. Growing up on the streets of New York, the young man became enamored with Hip Hop culture, writing graffiti and starting to rhyme at an early age.

Although he frequently cut school and ended up being arrested time and time again for his wild behavior, the kid still managed to finish high school and got accepted to a state university. Unfortunately, the survivalist and aggressive attitude that was the norm in New York City caused him to be involved in more violent altercations at school, whether it was with other brothers, false flaggers, or the relentlessly racist population of an uncultured Middle America.

Recently, at the request of many of our younger readers; those Veterans who’ve recently returned from active duty overseas, we approached the effervescent powerful youth icon, Mister Immortal Technique, and asked him for a perspective on the current issues of the day. His truth will blow your mind……….. VT: If you had to give Occupy Wall Street (OWS) three suggestions what would they be?

IMMORTAL TECHNIQUE: I would never do so publicly, anything I say to them is done privately, I know who reads these.

VT: If you were President of the USA how would you address and end police brutality in this country?

IMMORTAL TECHNIQUE:  By making the civilian authority that is outlawed from being a military force by Posse Comitatus more accountable to the people and have real consequences for violating the civil and human rights of citizens of the United States of America.

VT: What do you think of our U.S. government and other foreign governments as they acted so quickly this year to pass secret legislation? Is this just another year or a special year for these elites?

IMMORTAL TECHNIQUE: They are doing under Obama, what they could not do under Bush. It’s not about right or left it’s about a corporate agenda. Although there are fundamental differences in the base between parties that is the 10-25% fringe right and left of the factions.

VT: With more than half of America has already tried marijuana and still alive after the experience do you think public opinion is changing about this “illegal” drug? Do you think the feds will ever realize what a waste it is to pursue non-violent people?

IMMORTAL TECHNIQUE: I think once Pat Robertson came out for decriminalizing marijuana conservatives are now with their backs up against the wall. A few more Christian preachers from the right who see the benefits this has for people suffering horribly from cancer and other ailments will open the floodgates to the ending of the new prohibition.

VT: Do you think our government can do more for our U.S. Veterans? If so, what?

IMMORTAL TECHNIQUE: More job opportunities, healthcare, and immediate citizenship status for those fighting who are not citizens now. We can also heed the words and teachings of Smedley Butler, and not use our military force as a negotiating tool for our multi-national corporations. Declare war, not lie to the public and most certainly to our servicemen. More resources for returning veterans and drug and alcohol care (which is a disease) for those afflicted. Just look at any other troops around the world, those poisons you put in your body can turn a righteous man of honor into a war criminal. The true nature of a man doesn’t come from drinking or abusing drugs, a drunk person doesn’t ‘speak a sober mind’ he is a shell of himself. Our veterans deserve better.

VT: Obviously the wars and imperialism that go on today needs to end but what else needs to change in people’s daily lives to promote a more tolerable healthier planet that supports all its people? What would a healthy United States look like?

IMMORTAL TECHNIQUE: A country with knowledge of its origin, without swallowing the mythology of America told to us by the descendants of the people who stole this land originally. Stop the white ashing of slavery and slave masters, stop the ethnic cleansing of the South West which America only controls through the rite of conquest and acknowledge that those people lived there more than 1000 years before the bible was compiled in Nicea. This would foster culture and growth, respect, and focus on the more important issues we have. Knowledge of self and of course the personal responsibility of not living in the past but building a future. But unless you are willing to address these things and you keep a culture war on the South West you will never win. More conservative factions call it Amnesty, no, we indigenous people granted Europeans Amnesty and in return, we were given “Manifest Destiny”, a perversion of Christianity where politicians started speaking for God as if they wrote and were the only ones capable of interpreting or getting a mouthpiece to interpret scripture. We need to address the fact that races don’t technically exist and that we are essentially one human race who benefits from only the top 1% by creating these divisions based on skin color or religion.

VT: As a leader if you could have a message broadcast to every home in America what would be that message?

IMMORTAL TECHNIQUE: A soldier knows that he has to kill to protect, he has to fight, but his real job is to save people’s lives. A soldier is only a piece of a warrior, and a warrior is only a piece of man. True bravery doesn’t come from facing an enemy it comes from facing yourself. My friend came home from Iraq, with medals, ribbons, all that but all he sees are the faces of children, and charred remains, you can call him a hero, but deep in the hearts of all true warriors is the haunting nature of war. The causes and the justification can be repeated to you, by a holy man, by the leaders of your community, and even the president but in the end, you are left with the result of your actions by yourself. Our men are dying when they come home. Our government must address their concerns without political agenda, without playing with it like a political football. We who live in this age of the late republic need to realize how our troops are sent to police parts of the world so that our companies may gain more electronic money, like a video games. Where is the infrastructure, the great failure of American capitalism is its lack of investment in people, and only in the institution that purports to advance the condition of the working and middle class which we all see now, that they hardly ever do.

VT: What are your thoughts on the upcoming national election? What do you think of Mitt Romney, Newt Gingrich and President Obama? How about Ron Paul? Do you trust him or are you skeptical since we’ve not had an honest man in office forever?

IMMORTAL TECHNIQUE: Obama will win. Republicans never had a chance, he’s in the middle of an agenda, just like Bush was. The powers that be will not allow, that, ladies and gentlemen our presidents are selected, not elected. Romney, in all the debates, looks like an out-of-touch, rich guy, Santorum, a religious fanatic, a New big government conservative. Ron Paul would be best to run against Obama honestly. Because not only would he carry all of the conservative weight behind him. But he would take such a huge chunk out of the left-wing that is dissatisfied with the lack of progress and infringements on civil rights/civil liberties. He isn’t a perfect candidate either, but if he modified his stance on immigration I would vote for him. But Republicans will NEVER give him the nomination, you will hear every excuse, that he studders, that he is unelectable, but the reality is that if he were in office, he would audit the FED, bring our troops home, and end our 60-year love affair with the military-industrial complex as well the prison industry. But that would be a real campaign instead of this clown show we’re about to have. Watch and you’ll see.

IMMORTAL TECHNIQUE: Enlightenment at the cost of heartbreak, shattered faith, and cataclysm.

VT: Will we ever see an Immortal Technique show in Washington D.C? How’s about an outdoor event as close to the White House as it can get! Because I can tell you right now we need the music out on the lawn bringing in the crowds with your flow and intellect.

IMMORTAL TECHNIQUE: It would be my honor.

IMMORTAL TECHNIQUE BIOGRAPHY: Felipe Andres Coronel (born February 19, 1978), better known by the stage name Immortal Technique, is an American rapper of Afro-Peruvian descent as well as an urban activist. He was born in Lima, Peru and raised in Harlem, New York. Most of his lyrics focus on controversial issues in global politics. The views expressed in his lyrics are largely a commentary on issues such as class struggle, poverty, religion, government, and institutional racism.

Immortal Technique has voiced a desire to retain control over his production and has stated in his music that record companies, not artists themselves, profit the most from mass production and marketing of music. He claimed in an interview to have sold close to 200,000 copies of his three official releases.