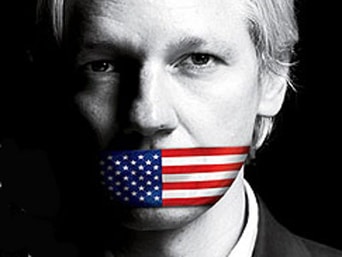 The Pentagon is attempting to quash coverage of its activities by alleging that any reporter seeking classified information is collaborating with the source and guilty of conspiracy to commit espionage, WikiLeaks founder Julian Assange says.

In an interview published in “Rolling Stone” magazine, Assange, now under house arrest in England, said the Pentagon demanded “we not only destroy everything we had ever published or were ever going to publish in relation to the U.S. government, but that we also stop ‘soliciting’ information from U.S. government employees.”

Assange asserts the Pentagon is trying to create a new legal precedent that forbids “a journalist simply asking a source to communicate information.”

“Individuals like (investigative reporter) Sy Hersh and Dana Priest (Washington Post)…constantly say to their sources, ‘Hey, what about this, have you heard anything about it? I heard there’s been an airstrike in Afghanistan that’s killed a bunch of civilians—do you have any more details…?” Assange said. Such questions “would be defined as conspiracy to commit espionage under the Pentagon’s interpretation,” he contends.

“If the Pentagon is to have its way, it will be the end of national-security journalism in the United States,” he asserted.

While Assange said the U.S. “has historically been a relatively open society,” within it “there is a shadow state, and that is the U.S. military, which, as of September (2011), held 4.3 million security clearances… That is a closed, totalitarian society that gathers and stores more information than any other society in the world.”

Assange said that for the past 20 years he has been developing systems “to protect people’s rights to communicate privately without government surveillance.” He said surveillance “is another form of censorship” because “When people are frightened that what they are saying may be overheard by a power that has the ability to lock people up, then they adjust what they’re saying. They start to self-censor.”

“I have a lot of sympathy for journalists who are trying to protect their sources,” Assange told reporter Michael Hastings of “Rolling Stone.” “It’s very hard now. Unless you’re an electronic-surveillance expert or you have frequent contact with one, you must stay off the Net and mobile phones.”

He went on to say, “We are now in a situation where countries are recording billions of hours of conversations, and proudly proclaiming that you don’t have to select which telephone call you’re intercepting, because you intercept every telephone call.”

Assange said the U.S. is trying to indict him for “espionage, or conspiracy to commit espionage, and computer hacking. The U.S. grand jury is looking at indicting us for charges which are not, on their face, political. But of course, the reasons are political, and that’s a different matter.”

He said the U.S. intelligence apparatus has subpoenaed the records of most of his friends in the U.S. and asked for their Twitter records, Google accounts and individual ISPs. “The laws which they’re working toward an indictment on are the Espionage Act of 1917 and the Computer Fraud and Abuse Act of 1986,” he said.

Assange embarrassed the Pentagon with the release of the infamous “Collateral Murder” video that showed a U.S. helicopter in Iraq spraying fire on unarmed civilians, killing several as well as two journalists.

He quickly followed up with the release of hundreds of thousands

of classified files related to the wars in Iraq and Afghanistan that created an international firestorm, reporter Hastings noted.

“But soon after he began releasing the diplomatic cables, which were widely credited with helping to spark the Arab Spring, he was detained and imprisoned after spending a week with two female supporters in Stockholm, entangling him in a yearlong legal battle to win his own freedom,” Hastings wrote.

Assange told Hastings of his respect for the democratic values of James Madison and Thomas Jefferson but said “the U.S. military-industrial complex and the majority of politicians in Congress have betrayed those values.”