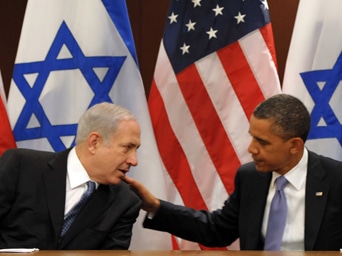 Forget the annual $4 billion US Congress gives to Israel, allowing it to kill, destroy, steal rob and kidnap. Our citizens simply should consider these numbers. 50-cent increase per gallon multiplied by 180 million cars and trucks with an average of 70 gallons per month per car/truck and voila, $6.3 billion extra to Israel each month. Israel’s war game has been on now for more than 5 months. Simply put, it’s time to tell Bibi and his cronies in Washington to go to hell.

The question is how long, we, citizens of the greatest democracy and one of the most powerful countries in the world, will allow Israel and its agents in Washington to blackmail us and take us to the cleaners…as if Wall Street is not enough!

Perhaps it is time to put Israel and its cronies in Washington out of business and reclaim our rights and freedoms from fear and blackmail. This coming election, let us all tell Obama, Romney, Gingrich and Santorum that America belongs to Americans, and not to Zionists. We should be voting for an American agenda, not an Israeli agenda.

The story of blackmail is the same all over Europe with European drivers also paying the extra price. Merkel, Sarkozy and Cameron are no different from Obama, Gingrich, Romney and Santorum; they all toe the line like elephants in a circus. With figures like these, the world is paying tens of billions in extra money every month so that Israel, a physiologically misfit country can get its way. So that the Israel lobby, more dangerous to America than the over 400 nuclear weapons in Israel’s stockpile, can get its way. Israel is not only blackmailing America, it is blackmailing the world as well.

It seems that every time AIPAC holds its annual conference, Americans are blackmailed to give Israel more money, more weapons, and more political support. One only needs to witness how sheepish American politicians become, from the President to the Speaker of the House to members of Senate and Congress, as they prostrate before King Bibi, the King of Israel and the King of Zionism.

I guess this game will continue until after the US presidential election, and so American car owners and drivers have to cough up tens of billions in extra gasoline prices until November elections or until such a time that Israel decides to attack Iran and the world goes up in smoke. Then there will be no more oil or cars on the road for a while.

Of course election time in the US is the time Bibi and AIPAC are put to greatest use, with political suicide awaiting anyone and everyone who dares to challenge the Israeli message that Iran, and not Israel is the most dangerous nation on earth. More than 60% of the Americans are already convinced Iran is danger to America. The Zionists are in control of our media, which took us to war already, and is now paving the road to Tehran with more American blood and money.

The sad story is that the mainstream media and members of Congress bought the Zionist message, despite the fact that Iran, unlike Israel, did not engage in any wars outside its borders for centuries, and did not attack American targets. Remember, Saddam Hussein initiated the Iraq-Iran war for an on behalf of the Reagan administration.

One has to wonder how a country perhaps with the most powerful and best equipped army in the Middle East and in Europe with over 400 nuclear weapons with capabilities to strike even the United States, is worried about a country that simply may possibly have the intention or potential to develop ONE nuclear bomb. Israel wants to make sure it has a monopoly on nuclear weapons.

Personally, I do not think it is the Iranian bomb that worries Israel, instead, it is what Israel can milk from the US and Europe that matters. With the Holocaust narrative running its course as an instrument of blackmail, it is now Iran and its supposed potential to develop nuclear capability that serves as new fuel for the Zionist cash machine.

Again, the same question remains, and must be decided by Americans: For how long will we as Americans have to accept this blackmail from Israel? Are the 10 years of wars and trillions of dollars down the drain not enough? Will we allow Israel and our politicians to lead us to self-destruction?

Our fellow Americans should think of Israel and its costs to us every time we dish out that extra 50-cent per gallon at the gas station. Enjoy the drive and think again, when voting in the November election.