Home Life The Ground Truth : The Human Cost Of War 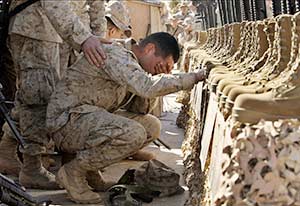 Sometimes the greatest act of courage is to tell the truth

In the opening scenes of Patricia Foulkrod’s powerful documentary, we’re introduced to a number of young soldiers who speak candidly and powerfully about the motivations that led them to join the military. As their stories unfold, we hear their surprised reactions to boot camp and combat training as they were taught to dehumanize their enemy, to “kill hadjis and ragheads.”

“The Ground Truth” is a documentary that should be watched by everyone who has a friend, relative or loved one who’s served–or is about to serve–in Iraq and Afghanistan.

Vist http://groundtruthstore.seenon.com to buy THE GROUND TRUTH– a moving and powerful documentary from Patricia Foulkrod’s.  Patricia Foulkrod’s searing documentary feature includes exclusive footage that will stir audiences. This seven minutes is a glimpse of the filmmaker’s subjects who are patriotic young Americans — ordinary men and women who heeded the call for military service in Iraq — as they experience recruitment, training, combat, homecoming, and the struggle to reintegrate with families. The terrible conflict in Iraq, depicted with ferocious honesty in the film, is a prelude for the even more challenging battles fought by the soldiers returning home — with personal demons, an uncomprehending public, and an indifferent government.

As these battles take shape, each soldier becomes a new kind of hero, bearing witness and giving support to other veterans, and learning to fearlessly wield the most powerful weapon of all – the truth.

Watch this unbelieveable 7 minute clip from the film.