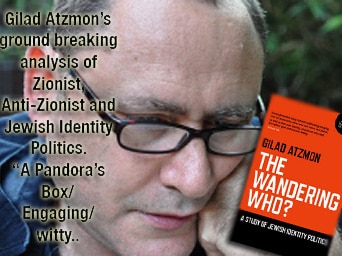 Disavowal: “…a mental act that consists in rejecting the reality of a perception.”

“For me to be Jewish is, above all, to be preoccupied with overcoming injustice and thirsting for justice in the world, and that means being respectful toward other peoples regardless of their nationality or religion, and empathetic in the face of human suffering whoever and wherever victimization is encountered” (Gilad Atzmon, “On Jewish Identity,” 1/15/2011).

Strange that the US Palestinian Community Network, in an article titled “Granting No Quarter: a Call for the Disavowal of the Racism and Anti-Semitism of Gilad Atzmon,” by Ali Abunimah, would seek to silence the voice of a man who, as the quote that opens this article attests, publically proclaims, to all the world in his new book The Wandering Who, that he stands for “justice, human dignity, equality and social and economic rights,” the very principles that the US PCN proclaims in that very article: “…we stand with all and any movements that call for justice, human dignity, equality, and social, economic, cultural and political rights.”

Perhaps Mr. Abunimah failed to read Mr. Atzmon’s book. Perhaps he failed to see the contradiction he penned. Perhaps he felt forced to respond to outside pressures that necessitated he “reject the reality of the perception” expressed by Mr. Atzmon and propose “disavowal,” an action that Nahida suggests might be related “to the Talmudic concept of excommunication in which “the Talmud forbids coming within six feet of a person who has been excommunicated“? (from “Disavow with no mercy,” Nahida exiled).

Strange also, is it not, that this imposition of an action on the members of the PCN, reflects a Medieval form of punishment or, perhaps, a tribalistic one, a concept (a perception perhaps) that Mr. Atzmon suggests is a tool of the Zionists’ strategy to control the masses, a perception that the PCN abhors in its condemnation of Atzmon.

Atzmon’s politics rest on one main overriding assertion that serves as springboard for vicious attacks on anyone who disagrees with his obsession with “Jewishness”. He claims that all Jewish politics is “tribal,” and essentially, Zionist. Zionism, to Atzmon, is not a settler-colonial project, but a trans-historical “Jewish” one, part and parcel of defining one’s self as a Jew. Therefore, he claims, one cannot self-describe as a Jew and also do work in solidarity with Palestine, because to identify as a Jew is to be a Zionist. We could not disagree more (PCN, Ali Abunimah).

Had Mr. Abunimah read Atzmon’s book he would have realized that this is not what Atzmon’s work claims. Atzmon begins by narrowing his subject:

Atzmon distinguishes among those who follow the Judaic religion; those who regard themselves as a human being who happens to be of Jewish origin; and those who put their Jewishness over and above all other traits. Chaim Weizman, the first Israeli President and a Zionist, identified being a Jew as a ‘primary quality’ above citizenship, occupation, head of household, indeed “Jewishness becomes the key element and fundamental characteristic of one’s being.” Vladimir Jabotinsky wrote “…the nucleus of his spiritual structure will always remain Jewish, because his blood, his body, his physical racial type are Jewish” (“A Letter on Autonomy,” 1904). It is this identifying principle that Atzmon sees as corrosive, not only to Judaism, but to the safety and security of the Jewish people, their friends and their neighbors. “…probably then and there I left Chosen-ness behind to become an ordinary human being” (6). (A Review of the Wandering Who, Cook).

Does Atzmon’s analysis that focuses on the Zionist strategies to enforce its goals translate now into anti-Semitism? When did Zionism become a synonym for Jew? Is it not “an international political movement that originally supported the establishment of a homeland for the Jewish people in Palestine (Eretz-Yisra’el) and continues primarily in support for the modern state of Israel.” (New World Encyclopedia). When did it become anti-Semitic to analyze a political party? Indeed, Atzmon’s criticism of Zionism focuses on its corrosiveness to Judaism itself, a concern that has been present in Jewish history since the inception of Zionism: 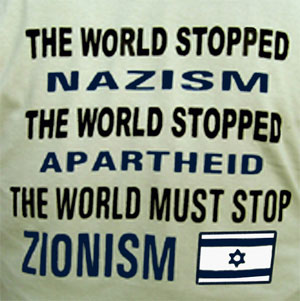 Throughout its history the Zionist movement has faced hostility from both within and without as well as considerable (sic) ambivalence among Jews with regard to the centrality of the Jewish State. …In the Jewish world, the ultra-Orthodox and the Reform movement have opposed Zionism as challenging tradition and assimilationism, respectively. …In recent years the Reform movement joined the Zionist Organization and has actively endorsed immigration to Israel. In Israel itself, the term “post-Zionism” has become popular in certain circles seeking to suggest that the movement is obsolete and at the same time to “demythologize” its achievements. (Encyclopedia of Judaism).

The PCN attacks Atzmon because in their view he appears “to reaffirm and legitimize Zionism” by “adopting anti-Semitic or racist language.” That conclusion is based on a misreading of his views as we have established above. How can a critique of Zionism’s strategies “legitimize” what it claims to be? Does it not do the opposite? By elucidating the coercive strategies used by the Zionists to control those opposed to its goals, does he not add insight as to how Zionism helps maintain and further the “imperialism and colonialism” PCN finds as the causes of the destruction of the Palestinian homeland, “expelling its people, and sustaining the systems and ideologies of oppression, apartheid and occupation.” In short, shouldn’t PCN embrace Atzmon as a man willing to place his own life in danger in his effort to aid the Palestinian cause?

Atzmon’s analysis reveals strategies used by the Zionists to control their population. He points specifically to the Zionist lobbies that tell the assimilated Jew “You will never escape who you are so why not be proud of it and work with us.” Indeed, this very assertion undermines a moral foundation as it forces the American Jew to succumb to that “primary quality” of Jewish-ness above loyalty to his nation. “First they are Jews and only then are they humanists” (35). Zionism, as Atzmon notes, has used Jewish ‘separatism’ and its resulting ‘insecurity in relations with his fellow beings’ to coerce obedience and commitment. This tactic has been characteristic of the Zionist power since the Mandate period.

This is not anti-Semitism; it is historical analysis based on personal experience that unveils a political movement that has as its principle goal the creation of Greater Israel, the full colonization of the lands of Palestine bereft of its indigenous peoples, a perception that PCN should give serious thought to as should we all.

William Cook : A Review of The Wandering Who