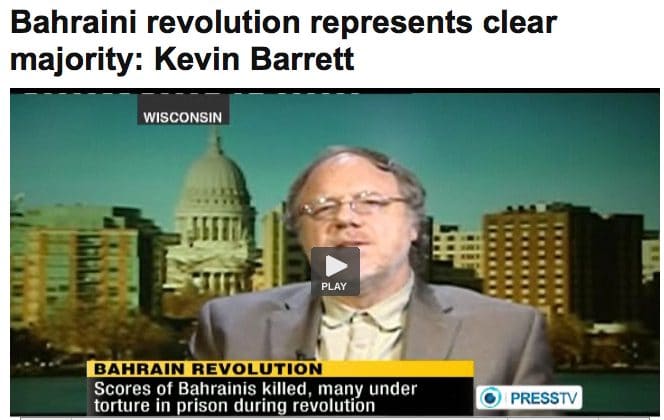 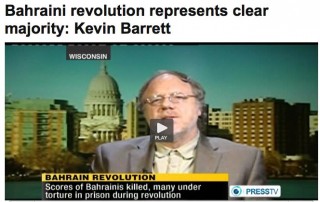 It has been one year since Saudi Arabian forces entered Bahrain to rescue the dictatorial Bahraini regime against a people’s popular revolution for democracy.

Press TV has interviewed Dr. Kevin Barrett, author & Islamic Studies expert from Wisconsin about the relationships between the Al-Khalifa regime, Saudi Arabia and the US and how these external partners have influenced the popular revolution in Bahrain.

He also discusses the muted way which the UN as well as other human rights organizations are responding to the human rights violations being carried out by the Bahraini rulers against the people.

Press TV: Do the people of Bahrain have any other option but to keep up these peaceful protests? In other words, what do they need to do, do you think, to have reforms or to have demands of theirs met?

Dr. Barrett: Well, the people of Bahrain are going to need a lot of patience because they’re unfortunately not being helped out by the West and the usual suspects who run around the world trumpeting their human rights concerns.

Here in Bahrain we have a genuine non-violent democracy movement. It’s not clouded by issues of civil war; outside provocateurs… It is a movement that represents clearly the majority of the Bahraini people.

In Syria by contrast, polls taken by the Qatar government have showed that more than 55 percent of the Syrian people actually support their government. It’s a much more complex situation there; but in Bahrain it’s a straight forward peaceful pro-democracy movement that’s being brutally repressed and has been now for more than a year.

Press TV: Let’s look at the international response to the situation in Bahrain. One question is, could the Bahraini regime have survived this without the support that it got from Saudi Arabia and without also the political and diplomatic support that it got from the US as well? In other words, how have these countries influenced the course of the revolution in Bahrain?

Dr. Barrett: Well, the Saudis actually invaded Bahrain and put down the popular democracy movement last year. Without that invasion things might have continued building and the regime would not have been able to survive.

And again, this is a case of just rank hypocrisy. Imagine what would happen if let’s say Iran were to send its forces into Syria to protect the government. Americans and their lackeys around the world would be screaming from the rooftops.

But here, the Saudi regime, which is a totally dictatorial monarchy, invaded a neighboring country to put down these peaceful pro-democracy protests… and did so successfully.

And of course the US, which has its Fifth Fleet based in Bahrain and which uses the Saudi dynasty to maintain corporate bankster control of the world dollar and oil system, didn’t’t mind at all.

So I think it’s clear that the Americans and the Saudis are behind this propping up of a regime whose days are clearly numbered.

Press TV: Let’s look at how the US is leading international efforts at the UN has been reacting to these revolutions. We saw for instance in the case of Libya or now in the case of Syria when it (the US) is not in favor of the rulers, it does call for military intervention; it does call for even equipping the opposition with arms.

Or as in the case of Yemen we saw the US and Saudi Arabia teaming up and calling for a political solution and even giving immunity from prosecution to the Yemeni ruler.

What kind of a solution do you think they’re looking for in the case of Bahrain? Do you think that they’re going to ask the Bahraini rulers to forego some of their powers?

Dr. Barrett: It’s possible that they would be pushing some kind of compromise on the Bahraini rulers. I think the US and its allies are still trying to maintain this neo-imperial control of the Middle East in order to maintain their dollar-oil hegemony over the world.

And to do that they have tried to guide these Arab revolutions toward something other than real democracy because… when you really get down to it, in the region if there were real democracy the US Empire and its Zionists accomplices would be voted right out of the region. So they can’t allow the region to generally democratize.

So what they’re trying to do is destabilize certain areas – Libya and Syria have been the victims of this kind of destabilization. And then to try to stabilize others that perhaps really need to be changed.

I think the Persian Gulf oil sheikhdoms are the places that really need democratization more than any other part of the Middle East because they’re the oil hub that really has the power by way of this control of oil supplies by a very small population that’s being propped up by the Western bankers and imperial governors.

Press TV: Looking at the situation in Bahrain we had a committee months ago investigating allegations of torture ad crimes and that committee concluded that the Bahraini regime has actually carried out torture against prisoners; we’ve had death sentences for opposition activists – they’re still in prison.

And as our guest in London was saying none of these reforms have happened, in order, as a precondition, to initiate that dialog.

We had the king in one instance saying that the constitution recognizes no such thing as an organized opposition in Bahrain. So, will the regime ever accept political reforms?

Dr. Barrett: Well that’s a very good question. I agree that stopping torture; releasing the opposition leaders who are in prison now, should be a precondition for any kind of real dialog and negotiations.

I understand there are hundreds of opposition leaders imprison and the crackdown has continued unabated. The regime troops have continued to fire vast amounts of teargas into neighborhoods; into people’s homes as well as using it in a way that’s clearly a breach of international law against demonstrations. There’s been live fire directed against neighborhoods, not just demonstrators, but the neighborhoods that support them.

It’s very much a one-sided picture of extreme state repression against a non-violent movement – Again, unlike what we saw in Libya and in Syria.

So I would agree with the other guest that we need some kind of change in government policy to basically agree that the opposition does have a place and the leaders need to be released from jail and we need to see some kind of a truce in the streets.

Press TV: We are seeing the Bahraini protesters out on the streets. At the same time they’re not getting any kind of concrete international support in their revolutionary move. There has been enough evidence of human rights abuses, of torture in the case of Bahrain violations of human rights – what can human rights organizations do about this? Why have we seen a muted response from the UN on this?

Even we have the reports of poisonous tear gas being used on protesters killing protesters and this poisonous gas the report says is being supplied by the US. What can the UN do about this?

Dr. Barrett: What the UN should do about it of course is give it the attention it deserves. But it appears that many of our human rights organizations like much of the Western corporate media is functioning more and more as a tool of propaganda for Empire rather than an honest broker. And that’s a shame.

The UN has had its moments of relative independence and honesty… But this is not one of them.

So let’s hope that popular pressure driven by the democratization of the media environment, of which Press TV is a big part, will lead to more and more people around the world seeing that in this case Bahrain is clearly a peaceful democracy movement being brutally repressed.

We need to put more attention on this; we need to get international investigations; we need to direct human rights organizations to look at this, not to be obsessed with what the corporate media masters here in the West are telling them to look at – which right now of course is Syria. We need to have some popular pressure on these organizations and maybe the UN will start doing its job in Bahrain.

Some of my other recent Press TV interviews: