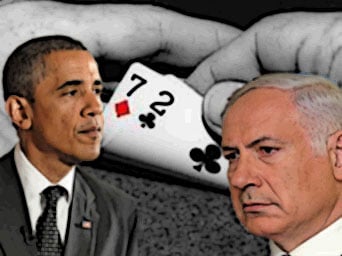 EDITOR’S NOTE: Reported properly, as Roy Tov advocates, disclosure can, or at least should, neutralize or diminish the ploys or their impact but, reported excessively, recklessly, with slight twists and spins on the truth, or without evidence to back up the charges, it can also discredit entire movements against just such things…as the often  apparent assault on the credibility and importance of the truths behind 9-11.

Is the poker game between USA, Iran and Israel nearing its end?

[Important Note: Before attacking me for this article, please consider that disclosing such ploys, neutralizes them.]

I wish I could say something smart about poker; that would be the perfect opening for an article on the ongoing poker game between the USA, Iran and Israel. Sadly, I don’t play the game. Yet, reliable sources told me that the most important thing while playing poker is not to blink. If you blink, the opponents may use the short visual break to trick you. It appears that this is all one needs to know about the game since on March 20, 2012, President Obama blinked and disclosed America’s strategy to defuse the stand-off in this political poker game.

On March 19, I published Armageddon’s Alliance just a few hours after Netanyahu’s speech to Christians United for Israel (CUFI) in Jerusalem.Analyzing Netanyahu’s words, CUFI’s reactions and a public speech—on the verge of being defined as a formal message from the Israeli establishment to American Jews—by leading Hebrew writer A. B. Yehoshua, it was easy to conclude that Israel is preparing an indirect attack on Iran. As a matter of fact this is the main political discourse in Tel Aviv for many months now. Yet, Israel has already acknowledged that it can’t strike effectively through conventional methods (see Israeli Defense Ministry Acknowledges Defeat and Astonishing Israeli Attack on Iran).

It seems that in order to attack Iran indirectly, Israel would try to use the heretic support of CUFI to force the American government to attack Iran, in what I have called in the past the “Wag the Dog” strategy. Yehoshua’s speech main surprise was a call to American Jews to emigrate to Israel; according to him this is so urgent that if possible, they should do that as of yesterday, leaving homes and jobs behind.

Due to the sensitive nature of that article’s content, a few things were just implied. Not only is that the favored way of a Hebrew speaker, it also saves me unpleasant encounters with the ADL and their nasty lawyers. Yet, the text was clear enough. One of my faithful readers in New England contacted me immediately, and in what I could judge only as an alarmed tone, asked me if Israel was to detonate a tactical nuclear device in the USA and blame Iran on that. In other words, I was asked if Israel was planning a false flag attack in the style of the 9/11 events, forcing the USA to attack Iran. Unfortunately, I failed to get an answer to that real concern from the Israeli Ministry of Defense.

Could such a feat be achieved? The existence of tactical nuclear devices, capable of creating tiny nuclear explosions with very little—or none—long—lasting radioactive debris is almost formally admitted. The question I got—from a knowledgeable person—was almost a formal admission of that. Apparently, these devices can be made to fit an unsuspicious suitcase. Could Israel smuggle one into the US? The way to achieve that would be dismantling the device in as many parts as possible, while properly encapsulating the radiating ones, and then smuggling it using as many ports of entry as possible. Israel has three easy options for that. A certain group of Israeli citizens—who dress up in a peculiar way—has been many times reported in the Hebrew media as involved in the smuggling of diamonds and illegal goods by sewing them in their odd clothes. For various reasons, customs don’t touch them. Another channel is El Al, Israel’s airline. On October 4, 1992, El Al Flight 1862, a Boeing 747 cargo plane crashed into the Groeneveen and Klein-Kruitberg flats in the Bijlmermeer neighborhood of Amsterdam. Many people died and were injured. The cargo included over 280 kilograms of depleted uranium—used for certain types of missiles—and 190 litres of dimethyl methylphosphonate, which could be used in the synthesis of Sarin nerve gas. The owner of the last was Israel Institute for Biological Research. Most important of all, is the Zim option; I commented in The Cross of Bethlehem how this shipping company is used to transfer products from Dow Chemical to Dimona’s nuclear reactor. Overall, it seems Israel is capable of transferring whatever it wants into the USA.

After Israel achieves that, what would its target be? It must be a place where Israel will find it easy to coordinate the event and where Israel will be perceived as a tragic victim of the event in the aftermath. Most readers have probably guessed like I did: New York. Keeping this in mind while reading Armageddon’s Alliance creates a scary picture, especially due to Yehoshua’s speech. “Leave America!,” he kept saying to American Jews. “Otherwise, you’ll be sacrificed as European Jewry was,” was the implied subtext.

Thus, on the theoretical level, this is a possible Israeli gambit. Would Netanyahu add to his title of bioterrorist the one of nuclear-terrorist? The American Administration has reasons to be worried.

Hebrew mainstream media is quite boring last months: “War, War, War” read the headlines; “Iran, Iran, Iran” read their subtitles. I commented on that several times (for example in Israel Bluffs Iran). Israel’s poker ploy is clear: “Hold me back!” is Netanyahu saying to the world, hoping to force the USA to attack (see Netanyahu Wags the Dog).

Iran’s attitude is more developed. Its forces are arranged in a defensive fashion (this is admitted even by the CIA), but at the same time is providing help to Hezbollah in Lebanon and Hamas in Gaza. Some time ago, I claimed that Bedouins may declare an independent state in the Sinai Peninsula and parts of the Negev Desert (see Explosion in Sinai). Confirming this possibility, Israeli media reported on March 19, 2012, that Iranian military experts are also training the Bedouins in Sinai. Iran’s poker ploy is sending a clear message that Israel could be hit even after a nuclear attack on the Iranian mainland.

America’s maneuvers were pretty clear until now. They were centered on complete support to Israel (see Netanyahu-Obama Talks Aftermath: Alert in Tel Aviv). Yet, it seems the USA is truly worried about the false flag operation described above. So worried, that on March 20, President Obama blinked.

On Tuesday, Obama made a video appeal to the Iranian people on the occasion of Nowruz—the Persian New Year—saying that there was “no reason for the United States and Iran to be divided from one another.” This is a sharp deviation from the belligerent Israeli-American discourse in recent months. Reliable sources claim these words left Netanyahu speechless and blinking uncontrollably.

Netanyahu is now afraid that the USA will sign a deal with Iran. After all, these two could live together in peace. Yet, Israel depends on war for its survival; this is so because war is Israel’s main source of incomes, but also because it is a way of controlling its population by distracting it from the deep social problems this country faces. Netanyahu needs a war with Iran. The only way Netanyahu could prevent a deal between the USA and Iran is by attacking Iran before an agreement is signed, or by performing a false flag attack on American soil. Obama bluffed Netanyahu, who is now looking down into hell, right below the bluff he is precariously standing on. No good options were left for him.

After WWII, the new nuclear weapons of the USA and the USSR lead them into a Cold War. Nowadays we are watching a new Cold War, this time between nuclear USA and a nuclear country that likes to portray itself as its ally: Israel.

ABOUT THE AUTHOR— Roy Tov is an Israeli dissident who converted to Christianity. Having had a career at Israel’s highest scientific institution and having served in top-secret military units provided Tov with unique insights. This made Tov a marked man when he tried to leave Israel. An attack by Israel left him with permanent damage in his throat. Personal grudges and grievances aside,  like Norman Finklestein, Noam Chomsky, Gilad Atzmon , Phil Weiss and so many others, he has the mind and the intellectual reasoning qualities of a typical well-educated and logical Jewish scholar. He is an effective researcher and writer on anti_Zionist and Israeli matters.

US exempts 11 states from Iran sanctions