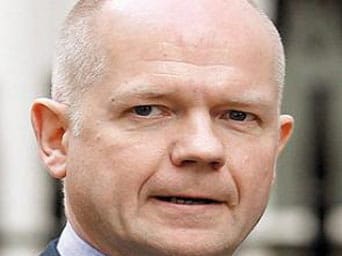 …but when will he give Israel the kicking it deserves?

UK Foreign Secretary William Hague has worked himself into a lather over Iran’s blocking of a Foreign Office website. He says: “I condemn this action by the Iranian Government.  ‘UK for Iranians’ was launched to reach out to Iranians, explaining, discussing and engaging with them on UK policy.

“We have no quarrel with the Iranian people… At the launch of our website, I celebrated the links between the UK and Iran, and the richness of Iran’s culture…  It is not just Iranians who are the poorer for their government’s censorship, but the rest of the world.  We will continue to look for opportunities to engage with the Iranian people, confident that Iranians are outward looking and deserve the same freedoms that others enjoy around the world.”

What a hoot! For months Mr Hague worked overtime to force the people of Iran into misery, poverty and isolation by imposing a battery of “unprecedented” sanctions. He then campaigned to have these measures intensified, and to hell with the consequences – for them and for us.

Hague, with his pro-Israel affiliations, is simply not the right person to engage with the Iranians or anyone else in the Middle East.

‘UK for Iranians’ looks like a clone of America’s “virtual embassy”, which is also beamed at the Iranians. It too was blocked back in December. The British website says things like: “The UK would welcome improved relations with Iran. We have shared interests in a wide range of issues, including a stable Afghanistan… However, the UK and many other countries have serious concerns about the Iranian Government’s policies: its failure to address serious international concerns about its nuclear programme; its support for terrorism and promotion of instability in its region; and its continued denial of the human rights to which its own people aspire and which Iran has made international commitments to protect…”

I suspect the only people in the UK who have concerns about Iran’s policies are the Israel luvvies and Washington lapdogs that infest our parliament.

It was Hague’s decision to shut down the British embassy in Tehran and eject the Iranians from London. He had not in any case maintained a full diplomatic presence in Tehran and the embassy operated at chargé d’affaires level for several months after the previous ambassador left. Perhaps they couldn’t find a new ambassador who was willing to jump through Hague’s foreign policy hoops. So now we do business with Iran through a third-party country, Germany.

So much for the desire to improve relations, reach out, engage, share interests, talk over “serious concerns”, and so forth.

Aiming a final kick our diplomatic service says: “The international community has lost confidence that Iran’s nuclear activities are for exclusively peaceful purposes…  We are clear that we have no quarrel with the Iranian people.  The responsibility for any impact on the population lies with the Iranian Government and their failure to meet the requirements of the IAEA Board of Governors and to comply with mandatory UN Security Council Resolutions.  The Iranian Government can choose to act to bring sanctions to an end at any point.”

In other words, we turn the screws but the screams are not our fault – just like it wasn’t our fault when we did the same in Iraq for 12 long years, starving their kids, before delivering shock’n’awe and wholesale destruction.

Hague said in his Middle East Statement, 9 November 2011: “Iran’s actions not only run counter to the positive change that we are seeing elsewhere in the region; they may threaten to undermine it, bringing about a nuclear arms race in the Middle East or the risk of conflict”.

Yet according to the US intelligence community Iran hasn’t got an active nuclear weapons programme and Israeli intelligence agrees. Only a few weeks ago the Director of the National Intelligence Agency, James Clapper, reported: “We assess Iran is keeping open the option to develop nuclear weapons… We do not know, however, if Iran will eventually decide to build nuclear weapons…”

Why is Hague so focused on Iran when Iran’s close neighbour Israel is the one with a runaway, unsafeguarded nuclear weapons programme?

UN Security Council resolution 487, in 1981, called on Israel “urgently to place its nuclear facilities under IAEA safeguards”. Israel has ignored it for 30 years. Hasn’t it occurred to Hague that Israel’s huge arsenal of weapons of mass destruction – nuclear, chemical and biological – and it’s refusal to end the illegal occupation of Palestine – are what’s really undermining positive change?

Furthermore, as the BBC reported Q&A: Iran nuclear issue, back in 2009 the IAEA called on Israel to join the Non-Proliferation Treaty, open its nuclear facilities to inspection and place them under comprehensive IAEA safeguards. “Israel refuses to join the NPT or allow inspections. It is reckoned to have up to 400 warheads but refuses to confirm or deny this.”

So Hague is kicking the wrong target. He needs to propel the toe of his bovver boot into the US-subsidized backside of the Zionist entity. That’s where unprecedented sanctions are need.

They are conspicuously absent when they would be so easy to apply.

And I’m still waiting for answers to simple questions I put to Mr Hague through my MP, who is one of his faithful lieutenants in the Foreign Office. They include…

And in an exchange of words the other day about the British Government’s obscenely greedy tax on motor fuel – it levies a 130% surcharge (in duty and value-added tax) on the ex-refinery price – the MP in question tried to persuade me that by December the measures his administration had taken would save motorists £144 filling up the average family car.

It’s a claim that will astonish British motorists who have watched with alarm as prices at the pump rocket and are likely to go higher, ditto energy prices as a whole. The Government’s policy of making bitter enemies where we need to have friends and forcing up the price of crude, is hurting us as well as the Iranians and is already causing catastrophic damage to British industry and hardship for families and pensioners.

I told the MP I hoped he wasn’t going to lecture us again on how the only way to defend our national security was to declare economic war on Iran and its people and threaten ultimately to vaporise their women and children and reduce their homeland to rubble. Nearly everyone by now knows it’s poppycock. Mr Hague, I said, “seems to have a thirst for aggravation, has assumed the role of Europe’s bovver-boy and right now is probably this country’s biggest liability”.