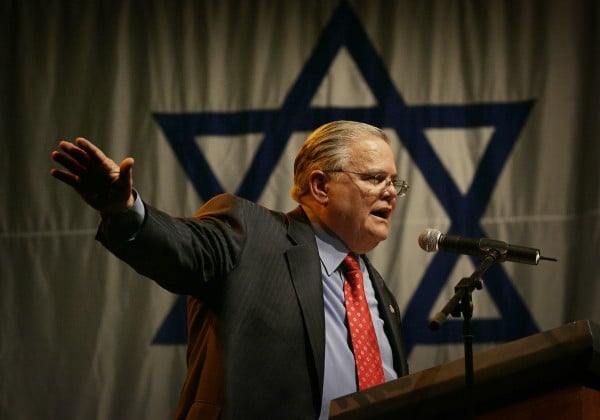 What does Hagee’s CUfI believe in?

If you are as puzzled as I am how a true Christian could possibly be taken in by Zionism, a short paper on the phenomenon is available from Sadaka:  http://www.sadaka.ie/Articles/Papers/PAPER-Christian_Zionism.pdf.

“The destiny of the Jewish people is to return to the land of Israel and reclaim their inheritance promised to Abraham and his descendants forever. This inheritance extends from the River of Egypt to the Euphrates. Within their land, Jerusalem is recognized to be their exclusive, undivided and eternal capital, and therefore it cannot be shared or divided.

At the heart of Jerusalem will be the rebuilt Jewish temple, to which all the nations will come to worship God. Just prior to the return of Jesus, there will be seven years of calamities and war known as the tribulation, which will culminate in a great battle called Armageddon, during which the godless forces opposed to both God and Israel will be defeated.

Jesus will then return as the Jewish Messiah and king to reign in Jerusalem for a thousand years, and the Jewish people will enjoy a privileged status and role in the world.”

The scary US-based Unity Coalition for Israel brings together more than 200 partners claiming to represent more than 40 million Americans in the largest network of Pro-Israel groups in the world. Their Mission is “to focus the efforts of secular and religious organizations and individuals for whom the existence of the State of Israel is central and essential to the future of the free world. We educate these organizations and individuals on security issues and radical ideologies, including global Islamic terrorism… UCI reaches millions of people through more than 200 Christian & Jewish organizations, including churches, synagogues, prayer networks, think tanks and thousands of individuals.

Pastor John Hagee is founder and chairman of Christians United for Israel, which claims to be the largest pro-Israel organization in America, with over 850,000 members. It holds at least 40 pro-Israel events a month in towns and cities across this country. “We’re building support for Israel from coast to coast!” is the sort of proclamation that reveals the real agenda.

What does Hagee’s CUfI believe in?

a) The Sacred Scripture

It is not possible to say, “I am a Christian” and not love the Jewish people. 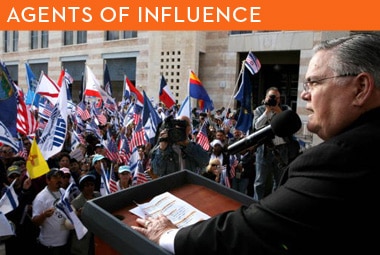 He uses ‘mushroom management’ methods – keep ‘em in the dark and keep shoveling horse manure at ‘em. If his Cornerstone church followers bothered to take an independent trip to the West Bank and Gaza – and I do mean independent, not an Israeli bus tour with guides trained by the Tel Aviv propaganda department (or by Hagee) – they’d quickly discover the unpalatable truth. The glitzy Hagee empire, and others like it, would then crumble.

An effective riposte to the biblical distortions used to support Israel’s lust for supremacy is The Jerusalem Declaration on Christian Zionism, a statement by the Latin Patriarch and Local Heads of Churches in Jerusalem issued in 2006 http://imeu.net/news/article003122.shtml.  They are on the ground, in the front line, in the Holy Land. They know the score. They put the genuine Christian case. And it is summed up in the first sentence:

“We categorically reject Christian Zionist doctrines as a false teaching that corrupts the biblical message of love, justice and reconciliation.

“We further reject the contemporary alliance of Christian Zionist leaders and organizations with elements in the governments of Israel and the United States that are presently imposing their unilateral pre-emptive borders and domination over Palestine. This inevitably leads to unending cycles of violence that undermine the security of all peoples of the Middle East and the rest of world.

“We reject the teachings of Christian Zionism that facilitate and support these policies as they advance racial exclusivity and perpetual war rather than the gospel of universal love, redemption and reconciliation taught by Jesus Christ. Rather than condemn the world to the doom of Armageddon we call upon everyone to liberate themselves from ideologies of militarism and occupation. Instead, let them pursue the healing of the nations!”

The Declaration, explains Sadaka, asserts that “Christian Zionists have aggressively imposed an aberrant expression of the Christian faith and an erroneous interpretation of the Bible, which is subservient to the political agenda of the modern State of Israel… Christian Zionism thrives on a literal and futurist hermeneutic in which Old Testament promises made to the ancient Jewish people are transferred to the contemporary State of Israel in anticipation of a final future fulfillment.” For the posh churchy word ‘hermeneutic’, read ‘interpreting the Scriptures’.

Not only does Zionism cloak itself in the Jewish faith, it hides its ugly face behind Christianity’s skirts. And, believe it or not, there is even a movement calling itself the World Muslim Zionist Organization.

In Christianity’s case the rot set in way back in1909 when the Scofield study bible was published and became the standard religious text in the United States.

It’s a propaganda classic. And the indoctrination has lasted 100 years.

Cyrus Scofield, a convicted criminal and described by one American newspaper as “a shyster”, was commissioned to re-write the King James bible by inserting Zionist-friendly notes. The idea was to change the Christian view of Zionism by creating and promoting a pro-Zionist sub-culture within Christianity.  The Oxford University Press appointed Scofield as editor, and the Scofield Reference Bible was born.

It introduced a new worship icon, the modern State of Israel, which did not exist until 1948 but was already being ‘prepped’ on the drawing board of the World Zionist movement.

American journalist Grace Halsell explained the re-hashed Biblical message: “Simply stated it is this: Every act taken by Israel is orchestrated by God, and should be condoned, supported, and even praised by the rest of us. Never mind what Israel does, say the Christian Zionists. God wants this to happen…

“Scofield said that Christ cannot return to earth until certain events occur: The Jews must return to Palestine, gain control of Jerusalem and rebuild a temple, and then we all must engage in the final, great battle called Armageddon. Estimates vary, but most students of Armageddon theology agree that as a result of these relatively recent interpretations of Biblical scripture, 10 to 40 million Americans believe Palestine is God’s chosen land for the Jews.”

This belief that Old Testament promises made to the ancient Jewish tribes are transferable to the largely unrelated people that make up the modern state of Israel is what underpins their hope for the final battle they call Armageddon, in which Israel’s enemies (and God’s, of course) will be defeated.  After that Jesus will return as the Jewish Messiah and King to reign in Jerusalem for a thousand years, and the Jewish people will enjoy privileged status in the world.

That is the Zionist dream of world domination in a nutshell. What’s in it for non-Jews? Blessed if I know. Yet armies of non-Jewish politicians have become eager stooges.

My reading of history is that the Jews were expelled from Palestine by the Roman occupation in 70AD, when the second temple in Jerusalem was destroyed. They were expelled again in 135AD.

Nowadays return is regarded as an inalienable right. But it must be exercised as soon as the reason for expulsion (e.g. foreign occupation) ceases. In the Jews’ case an opportunity would have occurred in the 4th century AD as the Roman Empire collapsed. But they didn’t take it. They can hardly expect to change their mind 16 centuries later. Their right expired a very long time ago.

By comparison the Palestinians’ right of return after being ethnically cleansed in 1948 (and ever since) is valid because the enemy occupation has not yet ended and the UN has endorsed their right.

Nevertheless Zionists claim Jerusalem is theirs by heavenly decree. But this holiest of cities was already 2000 years old when King David captured it.

Historians say that Jerusalem, in its ‘City of David’ form, lasted only 73 years. In 928BC the kingdom divided into Israel and Judah, and in 597BC the Babylonians conquered the city and destroyed Solomon’s temple. The Jews recaptured it in 164BC but finally lost it to the Roman Empire in 63BC. Before the present-day illegal occupation the Jews controlled Jerusalem for some 500 years, whereas it was subsequently ruled by Muslims for 1,277 years. Before the Jews it belonged to the Canaanites. And for nearly 90 years it was also a Christian kingdom. A lot of competing claims, then, which is probably why the UN declared in 1947 that it should be independently administered as an international city.

In 1187 Saladin restored Jerusalem to Islam while allowing Jews and Christians to remain. Today Jewish religious groups want control of the city for their spiritual centre and for a third temple to be built in accordance with ancient prophecies. The plan to make the Israeli occupation permanent threatens not only the Muslim but also the Christian holy places. Political and religious tensions are thus kept at boiling point. It is no wonder that the Iranian president quoted the late Ayatollah Khomeini as saying the unfriendly regime occupying Jerusalem “must vanish from the page of time”. It is no surprise either that he was immediately misquoted by Zionist propagandists as wanting to wipe Israel off the map.

The question is, are we seriously to believe that an all-powerful Supernatural Being has chosen and elevated one group of humans to a position of supremacy above all others, and has approved the use of any mean, including murder, brutal eviction and even war, to achieve their selfish goal, and now mobilizes millions of lesser mortals from around the globe, like those who regard themselves as upstanding Christians, to serve as tools and sing the praises of this ‘Grand Design’?

I’m with the Churches of Jerusalem on this. It’s a gross corruption of the biblical message.