Home Veterans The Rape of Democracy in Bahrain 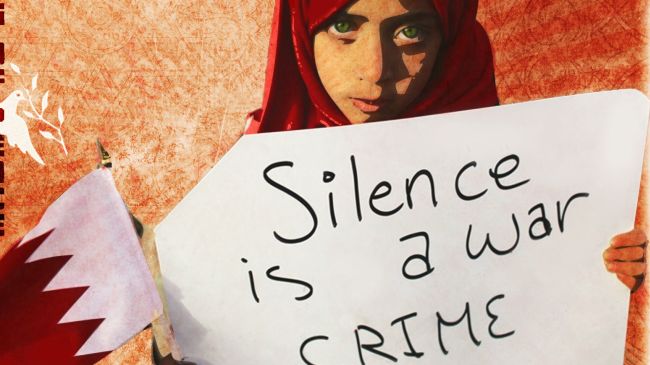 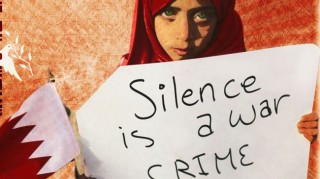 Google Bahrain and you will see how inexcusably the popular uprising in the Persian Gulf sheikhdom is being blacked out by the mainstream media and how discriminatingly the Western leaders ignore the vociferous demands of a nation for democracy and social justice.

Bahraini protesters are arrested and systematically tortured on a daily basis. The head of a fact-finding mission set up by the Bahraini government to investigate reports of torture has said Manama uses the systematic policy of torture against protesters.

Cherif Bassiouni said on November 2, 2011 that he had found 300 cases of torture during his investigation.

“It is not possible to justify torture in any way, and despite the small number of cases, it is clear there was a systematic policy,” Bassiouni said in an interview with Egyptian daily Almasry Alyoum.

“I investigated and I found 300 cases of torture and I was helped in that by legal experts from Egypt and America,” he added.

Brian Dooley of Human Rights First gives a painful account of the ordeals the Bahraini protesters arrested by the Bahraini forces. He also talks about teenage boys severely beaten by the Saudi-backed forces:

“They beat us until they got tired, then other policemen would take over and beat us more,” said one boy.

On March 22, 2012, Bahraini activists released a footage detailing the rape of a child at the hands of the Saudi-backed forces in Bahrain. The footage which was enough to chill the spine and curdle the blood showed a handcuffed child with his pants down. He was badly beaten. He was left unconscious with his hands tied behind his back. He was discovered lying in a street in the village of Sanabis, outside of Manama.

Kangaroo courts are rampant in Bahrain. In a 94-page report titled No Justice in Bahrain: Unfair Trials in Military and Civilian Courts in February 2011, the Human Rights Watch blasted the grotesquely Kafkaesque trials in the country, saying such trials were crass and politically motivated.

“The government should remedy the hundreds of unfair convictions of the past year by dropping the cases against everyone convicted on politically motivated charges and by adopting effective measures to end torture in detention,” he noted.

The group also demanded Western countries to suspend all military and security-related sales to the regime until the government fully addresses the violations.

“These violations reflect serious, systematic problems with Bahrain’s criminal justice system and the role of the military and intelligence services in state oppression,” the report pointed out.

Western governments shamefully help the autocratic regime of Al Khalifa to quell the protests by providing weapons and military equipment to the government. New official figures disclose that Britain continues to sell arms to Bahrain. According to the figures, the British government approved the sale of “military equipment valued at more than £1m in the months following the violent crackdown on demonstrators a year ago. They included licenses for gun silencers, weapons sights, rifles, artillery and components for military training aircraft” (The Guardian 14 February 2012). Also, in July and September, naval guns and components for detecting and jamming improvised explosive devices were exported to the monarchy.

In 2010, the US which has its Navy’s Fifth Fleet in Bahrain, sold over $200 million worth of weapons to the country, up from $88 million in 2009. In September 2011, the United States delayed a US$53 million arms sale to Bahrain for its possible concerns for the human rights violations in the country and the severe criticism by human rights groups. For instance, Maria McFarland of Human Rights Watch said, “This is exactly the wrong move after Bahrain brutally suppressed protests and is carrying out a relentless campaign of retribution against its critics. By continuing its relationship as if nothing had happened, the US is furthering an unstable situation.”

However, in a January 27, 2012 statement, the US State Department said it was planning to push ahead with the sale of approximately $1 million of equipment to Bahrain. All of a sudden, the US decided that Bahrain is an “important force for political stability and economic progress in the Middle East” and that they should do their best to provide the regime with all sorts of military equipment including 44 Humvees, more than 50 bunker-buster missiles and night-vision technology.

In reaction to the opposition of human rights activists, a US State Department official said that Washington “weighs the economic, national security, foreign policy and human rights implications of any proposed transfer of arms very carefully”.

The official who spoke on the condition of anonymity due to the sensitivity of the matter added, “We view the proposed sale as one that would help Bahrain’s defense force develop its capabilities against external threats and would ensure interoperability with our forces” (The Washington Post September 29, 2011).

Apart from having at his disposal UK and US weapons, Bahrain’s king Hamad bin Isa al-Khalifa has reportedly received some bezels of wisdom in cracking down on the protesters from the notorious British Colonel Ian Henderson AKA the Butcher of Bahrain. Ian Henderson is an enigmatic personality who is well-versed in military tactics and torture. A British citizen whose very name conjures up images of appalling torture methods, he used torture to crush the Mau Mau Uprising in Kenya, and later the 1990s uprising in Bahrain. It is widely speculated that Henderson has orchestrated the crackdown in Bahrain. He is charged with torturing Bahrainis while he served as the head of state security in Bahrain for approximately 30 years. According to political dissidents, he resorted to torture as a means to quell the opposition movement in Bahrain back in the nineties.

What seems to be of paramount importance is that he must have acted under the guidance of the British government. The complicity of the British government in the torture of the Bahraini dissidents has long been a matter of controversy. On 3 June 1997, at a parliamentary session, former MP George Galloway described Ian Henderson as “Britain’s Klaus Barbie” and said, “Henderson might have walked from the fevered pages of a Graham Greene novel. He was an interrogator of the Mau Mau during colonial rule in Kenya in the bitter struggle for independence. So brutally efficient were his methods that, on obtaining independence for Kenya, Jomo Kenyatta tried to re-engage him in his own security apparatus. So notorious was Henderson that a demonstration was mounted by his victims and the whole affair became so scandalous that Kenyatta was forced to deport him. Via Ian Smith’s Rhodesia, he ended up as the right hand man of the Al-Khalifa. In the Gulf, Henderson is known as the butcher of Bahrain. He is the head of the security services and director of intelligence and has gathered around him the kind of British dogs of war, mercenaries, whose guns and electric shock equipment are for hire to anyone who will pay the price” (www.publications.parliament.uk).

Ian Henderson was honored by Queen Elizabeth II with the title “Commander of the Most Excellent Order of the British Empire” (CBE) in 1986. He was also honored by Government of Bahrain with Order of Bahrain 1st Class and Bahrain Meritorious Service Medal 1st Class.

The West blatantly pontificates about democracy in the Middle East and North Africa and shuts its ears to the excruciating cry for social justice in Bahrain. To crown it all, it provides the regime with every means to carry out its brutality and crackdown.