Home Veterans US Supports Human Rights and Democracy? Tell it to Al-Khawaja! 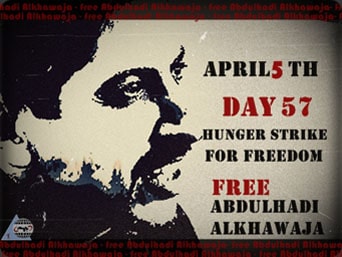 My interview with Press TV on Bahrain, where hunger-striking freedom and democracy activist Abdulhadi al-Khawaja is becoming a global icon of resistance, is now up:

The US behavior towards Bahraini hunger striker Abdulhadi al-Khawaja, a “classic nonviolence and pro-democracy activist,” is a clear example of the US hypocrisy on rights issues, an analyst tells Press TV.

The comment comes as the prominent Bahraini human rights activist’s health remains at risk as he enters the 57th day of his hunger strike in jail.

Khawaja was transferred to the prison hospital on April 3 due to deterioration of his health. He was given a life sentence in June of last year.

Bahraini demonstrators have persistently been demanding the release of Khawaja. The prominent activist has pledged to continue his strike until “freedom or death,” according to Bahrain Center for Human Rights.

Press TV has talked with Kevin Barrett, author and Islamic studies expert from Madison to further discuss the issue.

Let’s open that up more. The US has been criticized for a host of issues on Bahrain, their silence overall but also regarding this- Khawaja’s case.

Zeinab al-Khawaja is the daughter of this human rights leader, Abdulhadi al-Khawaja, and I’d like to quote her, she said, “With one word from the American governments and Obama, My father would be released. I am sure of that.”

Do you agree and if so, why isn’t the US government or Obama making that call?

Barrett: Well, that is a very, very good question. It is stunning- the hypocrisy, coming out of Washington and these human rights issues. Abdulhadi al-Khawaja is a classic nonviolence activist and pro-democracy activist.

If the words coming out of Washington were matched by deeds, he would be lionized by the US government; he would be all over the front pages of American newspapers and Fox and so on.

But of course that’s not happening, because the US has its fifth fleet in Bahrain and the US has made these unholy alliances, not only with the al-Khalifa regime in Bahrain, but also with the other retrograde [Persian] Gulf monarchies.

Press TV: Who, who controls the media in the US when you say that? Who are you referring to; when you say media are controlled?

Barrett: Over the decades…, media in the US is controlled in a number of ways.

One is, by actual Central Intelligence Agency [CIA] people, who are planted in various media operations.

The agency also deals directly with the owners and CEOs of media companies and there has been this total conglomeration of media over the past couple of decades and now about six organizations control just about everything that Americans see in the media.

So there is a combination of government interference in the media, secret, covert operations with the media and the media being bought up by a very, very small number of wealthy individuals, who operate with the US government.

Press TV: We have heard about this big plan that the United Sates has had for years for the Middle East on paper, we have seen what has occurred.

Is it a containment policy now or is it part of this counter revolution as it has been categorized for the US and of course then it comes to play the double standards they have had, for example on Bahrain?

Barrett: Well, I actually agree with my friend and colleague Dr. Tallawi, that the policy is being set more by the Zionists than, as a carefully thought out strategy for US control of the Middle East and I think that the policy that is in place now, is more along the lines of the policies, developed in Tel Aviv over the past few decades.

The Clean Break Memorandum Commission by Benjamin Netanyahu, for which he employed the Wolfowitz, Richard Perle and other folks from the project for new American century, was part of the continuation of this long term Israeli strategy to divide and conquer the Middle East, by breaking it up along ethnic and sectarian lines.

And that is what the US is doing now, because of the fact that the extreme Zionist control American mid-East policy, especially since the coup d’état of September 11th, 2011.

So in terms of the policy towards Bahrain, I agree that it is not just a matter of the fifth fleet being there. But it is part of this larger strategy, in which the Zionists are destabilizing certain areas such as, Libya and especially Syria; whereas they are trying to stabilize these retrogressive Persian [Gulf] monarchies that are essentially in bed with the Zionists.