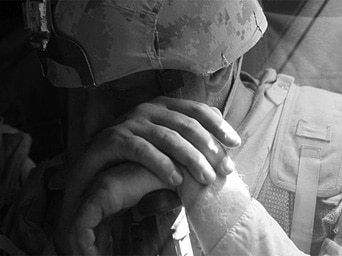 WASHINGTON, April 5, 2012 – A Pentagon Channel documentary sheds light on how military veterans with post-traumatic stress disorder are finding help through the power of horse therapy.

“Recon: Unbridled” highlights “Horses for Veterans,” at Flag is Up Farms in California, an intensive three-day program designed to help veterans of all ages who have PTSD, free of charge.

“I think No. 1 is to work with veterans who have given up on life,” said Monty Roberts, a renowned horse whisperer. Roberts uses his horse-friendly “Joining Up” techniques on abused and mistreated horses, and adapts it for self-isolating veterans who have post-traumatic stress.

Roberts’ program is about learning to trust people by choosing to, rather than by force, he said. By using the language of the horse or the stress of the veteran to communicate, he added, his program engenders trust.

“When they trust you, they will migrate toward you, rather than going away [out of fear],” he said. “Horses are flight animals. They are frightened of everything they don’t understand. If they don’t trust it, they need to get away from it, and that’s how a veteran feels, too.”

The old style of “breaking” horses often involved using violence to force them into submission, but Roberts’ style, which he calls “gentling” or “natural horsemanship,” is nonviolent.

“They get nothing from the fight, so they literally give up,” he pointed out.

Veteran Alejandra Sanchez is on her fourth visit to Flag is Up Farms, but remembers her first time like it was yesterday.

“I have never been so scared in my life,” she said. “I wasn’t even that scared when I was in Iraq. My anxiety was through the roof, because I had to face that I had post-traumatic stress.

“Every night you knew when the sun set, action was going to happen,” she continued, recalling her service in Iraq. “I remember coming to the oddly weird term of ‘I might not make it.’”

Sanchez faced her fears head-on in the “Horses for Veterans” program.

“You have to work with people you don’t know, and you already have trust issues,” she said. “It definitely brought out all of the symptoms I face, but at an intense level I normally haven’t dealt with.” Sanchez said she had to learn to calm herself down for the horses to learn to trust her. “The horses would not respond to me if I was anxious, angry or violent,” she said.

Veteran Alicia Watkins isolated herself from friends and family and lost everything she had after she returned from tours of duty in Afghanistan and Iraq. She was homeless, living in her car for a year, and said she’d lost her dignity.

“I know what it’s like to get to the point where you no longer want to live,” she said. “I remember going on convoys and not being able to handle it.” By the time she returned home in 2007, she’d had many near-death experiences, she said.

When she accepted an invitation to attend Roberts’ program, she showed up huddled in layers of jackets, a hoodie and sunglasses. Roberts worked with Watkins to help her earn the trust of a horse after he saw room for extreme change in her, he said.

“Hearing him talk about training the horses, I began to realize how horses and my PTSD were … the same,” Watkins said. She said she related to the horses’ “flight mentality,” because that’s what she saw in herself.

“To reprogram the horses to be domesticated was something I could identify with,” she said, noting they had been neglected or abused by former owners. “I found something that could almost immediately erase the pain and suffering of all those years. “Within an hour, I was a totally different person.”

When her horse began to trust her and obey her commands, Roberts said, Watkins “became the most exuberant, outgoing participant.”

“The change in her was like night and day,” he said. He invited her back to train for three days with a new class of veterans.

Watkins said she saw herself in the new class of veterans. “To see that shell open up and see that person transform, it’s so beautiful to watch yourself in someone else,” she said. “‘I feel like a victim’ becomes ‘I feel like a victor.’”

After working through her isolation and related issues with PTSD in “Horses for Veterans,” Roberts sa