Home Veterans Both Sides of an Argument : The Crisis of Zionism 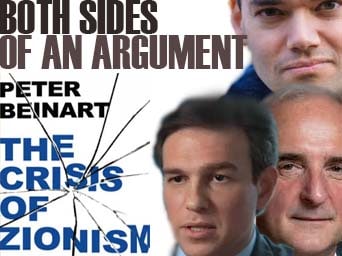 A perfect match of opposing views was the focus of two book reviews of Peter Beinhart’s The Crisis of Zionism.

Rubbish! Someone characterized the arguments we made as college debaters.

We knew better. The hours we spent at night gathering evidence we would use against our opponents made us more than just debaters. We were different.

We were the informed public who read the major newspapers and political magazines.  We knew how to use libraries to prove our opponents wrong.

Just as importantly, we could argue for or against the same thing. One day affirmative, the next negative on any topic.

We knew in our hearts and minds that we were superior to those who didn’t read and keep up with what was going on in the world.

We were even convinced that we knew more than the writers we quoted: they could only argue one side of a question, and therefore lacked the knowledge needed to convince an audience that what they believed was undeniable.

We took our gigantic trophies, mounted them in glass cages in the university, graduated and took our skills and large egos with us to convince others of whatever arguments we were trained to win.

This evening, I couldn’t help remembering that early training as I scanned through arguments on a topic which a friend suggested.

A perfect match of opposing views was the focus of two book reviews of Peter Beinhart’s The Crisis of Zionism.

One of the reviews, the negative one by Bret Stephens of the Wall Street Journal, on March 26 in Tablet, is headlined “Peter Beinart’s False Prophecy”. http://www.tabletmag.com/jewish-news-and-politics/94872/peter-beinarts-false-prophecy/

Stephens denigrates ‘The Crisis of Zionism’ from the outset, arguing that “the Israeli occupation alienates young American Jews, is sloppy with facts and emotionally contrived.”

The other, Roger Cohen’s “The Dilemmas of Israeli Power” in the New York Times, is positive from beginning to end. http://www.nytimes.com/2012/02/14/opinion/cohen-the-dilemmas-of-jewish-power.html?_r=2&partner=rssnyt&emc=rss

Cohen praises  “… Beinart’s The Crisis of Zionism as an important new book that rejects the manipulation of Jewish victimhood in the name of Israel’s domination of the Palestinians and asserts that the real issue for Jews today is not the challenge of weakness but the demands of power.”

There you have the ideal topical debate.  The debate itself, however, is less than ideal. Concluding his review, Stephens dismisses Beinhart’s book as “an act of moral solipsism.”

“It doesn’t seem to occur to him that his idea amounts to another squeaky note in the blasting chorus that is modern-day Israel bashing.”

Thus, Stephens gives himself away as the defender of Israel, no matter what Israelis do; and any criticism can be ignored as Israel bashing.

After reading the same book, Cohen was able to look at Reinhard’s topic with fresh eyes from outside of the box.

“This is not 1938 revisited, or even 1967. Israel is strong today, a vibrant economy and the Middle East’s only nuclear-armed state,” writes Cohen.

Cohen doesn’t forget what it looked like inside the box.  He argues “Threats persist, of course. The annihilationist strain in Palestinian ideology, present since 1948, has not disappeared.”

Both writers are debaters who argue only one side of a question. To take more than one side is to earn the epithet “a flip-flopper” as Mitt Romney has.

Stephens and Cohen are both Jewish, which gives their arguments an aura of authenticity. In reviewing a book on Zionism, both have an innate familiarity with their topic.

While both have the advantage of familiarity with their topic, how is the casual reader to accept or reject arguments?

In any debate, the most credible argument comes from one whose own interests are sacrificed for the sake of truth. Cohen wins this round.