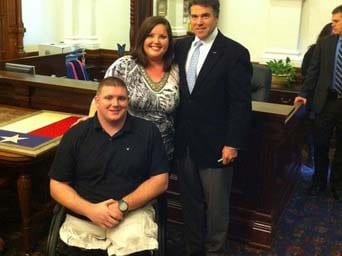 An airman who lost both legs during botched gallbladder surgery in 2009 plans to challenge a Supreme Court ruling that for more than 60 years has barred active-duty military members from suing the government for service-related injuries.

Colton Read and his wife, Jessica, are seeking $54.8 million for pain, mental anguish, disfigurement, loss of earnings and other damages, according to a lawsuit filed March 30 in U.S. District Court.

Read was a healthy 20-year-old airman first class when he arrived at the David Grant Medical Center on Travis Air Force Base, Calif., the morning of July 9, 2009, for what was supposed to be minimally invasive gallbladder surgery.

Two Air Force doctors had recommended the procedure to put a stop to his stomach pains. Read, an imagery analyst, agreed so that he could deploy.

The surgery was barely underway when a surgical resident, Capt. Ryan J. Schutter, punctured an aortic artery that supplies blood to the legs, the lawsuit states. Instead of repairing the artery, the general surgeon, Maj. Kullada Pichakron, blocked off the blood supply, according to the claim.

Over the next several hours, as Read’s legs turned cold and pale and barely registered a pulse, medical staff debated whether to transfer him to a civilian hospital where a vascular surgeon was on staff. By the time the transfer occurred — nearly eight hours after the surgery began — doctors had no choice but to amputate his already-dead legs above the knees, it said.

After 16 more leg surgeries, Read was left with about three inches of his right leg. His left leg stops about two inches above where his knee used to be. His gallbladder was finally removed in February 2010 — seven months after everything went wrong in the operating room.

Darrell Keith, the Fort Worth, Texas, an attorney representing the couple, called the case “among the worst, if not the worst, in military malpractice history.”

What happened to Read is “just horrific,” said Keith, who has specialized in medical malpractice cases for 41 years. “A great wrong occurred to Colton and his wife that needs to be righted.”

It will be an uphill battle, Keith said. The Supreme Court has repeatedly upheld the so-called Feres Doctrine, which stems from the 1950 high court ruling that the federal government cannot be held liable for injuries suffered in the course of military duty. That has grown to include instances of medical malpractice.

In June, the Supreme Court refused to hear the case of Staff Sgt. Dean Witt, who was left brain-dead after David Grant Medical Center staff inserted a breathing tube into his esophagus instead of his trachea when he stopped breathing following an appendectomy in 2003. Witt was 25.

A retired Army lawyer the Reads contacted soon after the surgery turned down their case.

Keith said he hopes the “extremely egregious” facts of what happened to Read will compel the Supreme Court to take notice.

“The Feres Doctrine is a universally criticized, unjust law that needs to be overturned in the interest not only of Colton but military servicemen and women everywhere, particularly in medical malpractice,” Keith said.

The Air Force did not respond to emailed questions about whether Pichakron and Schutter are still practicing medicine. A photo of Pichakron posted on the Travis Air Force Base website in January 2011 showed the doctor working in Craig Joint Theater Hospital at Bagram Airfield, Afghanistan.

The Reads welcomed their first child, a daughter, in February. Read medically retired from the Air Force late last month.

He said he has been diagnosed with post-traumatic stress disorder. He recently learned that not enough remains of his right leg for regular use of prosthetics.

At 23, Read is confined to a wheelchair. “One thing that I would really like to explain is there’s really no recovering from losing my legs,” he said.

He battles depression and suffers “phantom pains,” excruciating sensations where his legs used to be. He still mourns what he has lost.

Read was in grade school when he decided to join the military. It was just after the Sept. 11, 2001, terrorist attacks.

“I wanted to be an airman,” he said. “I just wanted to serve my country.”