Home WarZone Putting Palestine back on the agenda 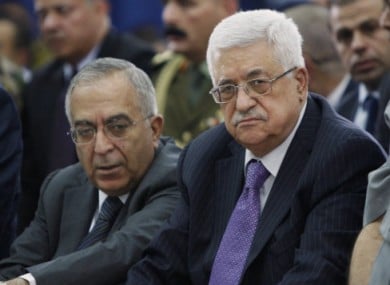 Palestinian Prime Minister Salam Fayyad is about to meet with Netanyahu and will hand him a letter which will lay out Palestinian positions for an agreement with Israel and give him, Netanyahu, one month to respond positively. If he does not respond positively, the letter will say, Abbas will resume the process of seeking to obtain UN recognition of a Palestinian state.

By asserting that Iran is a threat to Israel’s existence (a ludicrous assertion) and beating the drums for war with it, Israeli Prime Minister Netanyahu has succeeded in getting Palestine off the political and mainstream media agenda and winning more time for Zionism to consolidate its occupation of the West Bank.

As Barak Ravid noted in an article for Ha’aretz, “The Presidential election season in the United States is obviously an especially good time to enlarge settlements in the West Bank and strike new roots in the Jewish neighbourhoods of East Jerusalem.”

Question: What can be done to put Palestine back on the agenda?

Answer: Close down the Palestinian Authority and by so doing make Israel fully responsible for its occupation.

As my regular readers know, I advocated this course of action many months ago, but the case for actually doing it has now been well made by Yossi Beilin, the Israeli who has worked harder than any other for real peace with the Palestinians.

Beilin served as a minster in the cabinets of three Israel Prime Ministers – Rabin, Peres and Barak; was the architect on the Israeli side of the Oslo peace process; worked on the Beilin-Abu Mazen talks between 1993 and 1995; and launched the Geneva Accord with Yasser Abed Rabbo in 2003. Incidentally, I agree with Beilin.

The Oslo process was not doomed to failure from its beginning. As Arafat once said to me, it could have worked if Rabin had not been assassinated by a Zionist zealot and if the U.S. and other major powers had insisted that Israel honoured the commitments it made.

Beilin delivered his call for action in an open letter to Palestinian “President” Abbas published by Foreign Policy. It was headlined Dear Abu Mazen, End This Farce.

Here is part of what Beilin wrote:

I admit that I never believed the moment would come when I would have to write these words. I am doing so because U.S. President Barack Obama has convinced you not to announce, at this point in time, the dismantling of the Palestinian Authority’s institutions and the ‘return of the keys’ of authority for the Palestinian territories to Israel.

Because there have never been serious negotiations with the government of Prime Minister Benjamin Netanyahu over the last three years, and because you did not want to perpetuate the myth that a meaningful dialogue existed, you have been sorely tempted to declare the death of the ‘peace process’ – but the American president urged you to maintain the status quo. It is a mistake to agree to Obama’s request, and you can rectify this.

You and I both understand that the current situation is a ticking time bomb. From my point of view, what is at stake is the loss of Israel as a Jewish and democratic state. From yours, it is the loss of the chance for an independent Palestinian state. And from both of our points of view, the failure of the two-state solution risks a renewal of terrible violence.

Anyone who believes these things must take action. You can do it, and for this step you do not need a partner. A declaration of the end of the Oslo process – justified by the fact that the path to a permanent-status agreement is blocked – is the most reasonable, nonviolent option for putting the subject back on the world’s agenda, with the aim of renewing genuine efforts to reach a conclusive solution.

Dissolving the Palestinian Authority and returning daily control to Israel would be an action nobody could ignore. It is not at all similar to a demonstration in front of the Municipality of Ramallah, nor is it similar to appealing to the United Nations for member-state status. This is a step that only you can take, and a step that will demand a response.

I know how difficult it is. I know how many tens of thousands of people depend on the Palestinian Authority for their livelihoods. I am able to appreciate all that you and Prime Minister Salam Fayyad have accomplished – establishing Palestinian institutions, growing an economy in impossible conditions, and fostering security in the West Bank.

Do not hesitate for a moment! Do not accept the request of President Obama, who merely wants to be left undisturbed before election day. Do not let Prime Minister Netanyahu hide behind the fig leaf of the Palestinian Authority – impose upon him, once again, the responsibility for the fate of 4 million Palestinians. Remain as the head of the Palestine Liberation Organization, which will give you the authority to lead the political negotiations if and when they resume.

After that call for action, Abbas told an unofficial Israeli delegation which included Beilin that he was not prepared to wait until after the U.S. presidential election in November and was prepared to rock Obama’s boat. What might that mean?

Palestinian Prime Minister Salam Fayyad is about to meet with Netanyahu and will hand him a letter which will lay out Palestinian positions for an agreement with Israel and give him, Netanyahu, one month to respond positively.

If he does not respond positively, the letter will say, Abbas will resume the process of seeking to obtain UN recognition of a Palestinian state.

Momentum on that front could be seriously embarrassing for Obama because it could lead to him having to veto UN recognition of a Palestinian state in the final countdown to the November election.

I can almost hear Obama administration officials saying to Abbas something like, “If you wait until after the president is re-elected, there will not be an American veto.

During his meeting with the unofficial Israeli delegation Abbas confirmed that his officials have discussed dismantling the Palestinian Authority and said that the issue will arise again if the process of seeking to obtain UN recognition of a Palestinian state is resumed.

Could that mean that Abbas will be ready and willing to dismantle the PA in the event of an American veto of UN recognition of a Palestinian state and/or Netanyahu’s confirmation by default that Israel is not remotely interested in peace on any terms acceptable to the Palestinians?

If Abbas does agree to end the farce and dismantle the PA, how would the Palestinians be represented after the impotent and discredited institution had been put out of its misery?

Short answer, by bringing back to life the Palestine National Council, re-invigorated by elections to it in every place on Planet Earth where Palestinians are living.

In my view dismantling the PA would put Palestine back on the agenda and a re-invigorated PNC could and would keep it there.

But it’s not so simple. Bringing back a re-invigorated PNC as the Palestinian parliament-in-exile and the highest decision-making body on the Palestinian side would require the Palestinian Diaspora to become seriously engaged. The question is – Do enough Diaspora Palestinians care enough to make it happen?

I have previously written, and believe with even more passion today, that if they don’t, they will be charged by future historians with betraying their oppressed brothers and sisters in Palestine that became Israel.

On April 3, 2012, Arizona State University’s (ASU) Students for Justice in Palestine (SJP) staged a debka flashmob on their campus.

It began seven years ago with 21 students studying printing and graphic arts at Seragraph Printing in West Bend. It’s grown to more than 1,500 Wisconsin high school students working as apprentices at hundreds of businesses around the state.

Juniors can sign up for the two-year programs, which vary from district to district and can focus on any of 20 disciplines, ranging from auto collision to welding, tourism to biotechnology.

The state provides the curriculum and the educational standards that were developed with input from businesses. Consortia — some based at local Cooperative Educational Service Agencies, the local Chamber of Commerce or local technical college — decide which of the 20 areas to offer depending on which local businesses participate.

“The programs are totally locally controlled . . . which is how we want it,” Fromader said.

The program at Generac Portable Products is just one of several apprenticeships offered at Watertown High School, said Cyndy Sandberg, who coordinates the school-to-work programs there. Other students study and work at a local nursing home, a hospital, auto repair shops and a machine shop. More than 50 percent of the senior class each year is involved in some type of work-based program for which they get credit, Sandberg said.

“What I tell our employers is, `Your future work force is sitting here in my four walls,’ ” she said.

In Dane County, more than 100 students work and study at 60 local businesses in nine areas, including printing/graphic arts, finance and architecture, said Diane Kraus, the county’s youth apprenticeship coordinator. Kraus’ salary is paid for by the county’s 16 school districts.

In some cases, the technical instruction is given on site. In other cases, students attend courses at Madison Area Technical College or a local high school, she said. Most return to their home school for academic instruction, she said.

Kraus said she sees several advantages to youth apprenticeship. Students gain maturity and work experience. Employers get well-trained workers. Even students who plan to go to a four-year institution get the chance to try out their field of choice before investing in a college education, she said.

Kraus said her son, Eric, who will be a senior at Waunakee High School, is entering his second year of a pilot apprenticeship in information technology. Along with 14 other students, Eric takes technical courses at a local computer firm, Inacomp, and academic courses at Waunakee. He works at Great Lakes Higher Education and plans to go onto college next fall.