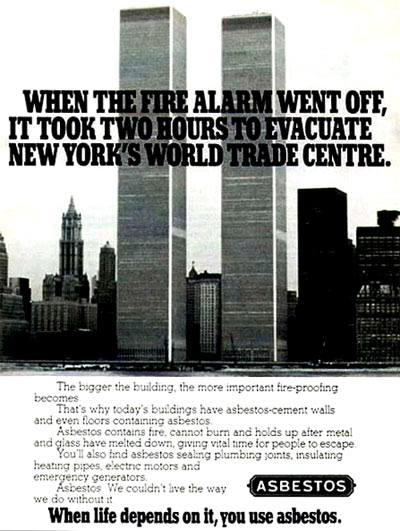 Silverstein laughs all the way to the bank 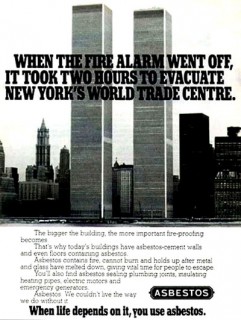 In today’s news, American Home Assurance has announced that it is capping payouts for WTC-demolition asbestos claims at a measly $10 million.

The announcement underlines just how much cheaper it is to demolish asbestos-laden skyscrapers without a permit, than to follow legal procedures.

Larry Silverstein, a reputed illicit-sex-industry mobster, purchased the World Trade Center in 2001, shortly after the New York Port Authority lost an asbestos lawsuit and was ordered to remove all asbestos from the Twin Towers.  Cost estimates for that asbestos removal ranged from the low billions to the tens of billions – far more than the outdated, half-empty buildings were worth. (The City of New York had been desperately seeking a way to demolish the Towers since around 1990, but was prevented from doing so by asbestos issues.)

Silverstein would have gone bankrupt within a few years at most had the Towers not been illegally demolished on September 11th, 2001. Thanks to that illegal demolition, Silverstein – who had doubled the WTC’s terrorism insurance and changed it to cash payout when he finalized his purchase in July, 2001 – walked off with a 5 billion dollar cash return on his 100 million dollar investment. When last sighted, Silverstein was back in court asking for another 11 billion dollars from airline insurers.

Silverstein is notorious for confessing on national television to the illegal demolition of World Trade Center Building 7.

During a recent interview  the Kevin Barrett show, former intelligence community insider and  current Veterans Today Editor Gordon Duff stated that the crimes of 9/11 were conceived in New York City, by people linked to organized crime and the Israeli Mossad, as an illegal demolition project, and subsequently sold to corrupt elements of the Bush Administration, the intelligence community, and the military (especially the Armageddonite wing of the US Air Force). Duff added that many of those with direct knowledge of the crimes have come forward, and suggested that non-complicit insiders are working to bring the perpetrators to justice by any available means.