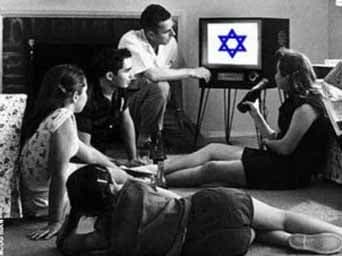 A British Broadcasting Corporation has a news documentary on Mordechai Vanunu, the man who exposed the reality of Israel’s nuclear weapons programs and the stockpile of nuclear bombs it churns out.

And it has brought to light a very critically important fact which sheds much needed light on who controls the American media.

It does a great job of showing Israel’s fear of Mordechai Vanunu who blew the whistle on Israel’s secret nuclear weapons production.

After being kidnapped by Israeli terrorist agents Vanunu was imprisoned for over 18 years and is now still under house arrest.

It does a great job of showing Israel’s fear of Mordechai Vanunu who blew the whistle on Israel’s secret nuclear weapons production. After being kidnapped by Israeli terrorist agents Vanunu was imprisoned for over 18 years and is now still under house arrest.

One of the many benefits of this documentary, in addition to bringing attention to the plight of Mr. Vanunu and the real threat the Jewish state is to world peace, is that it brings to light the fact that the media in the United States is not a free media.

The media in America censors and shapes the “news” in ways that are most beneficial to Israel. Everything Americans see on the news is seen through Jewish lenses.

At 40:09 in the documentary the BBC correspondent asks Americans who are demonstrating in Minnesota against the war in Iraq if they know who Mordechai Vanunu is.

Nobody knows who he is. She then asks them what they would say if she told them he was somebody who exposed Israel’s nuclear weapons of mass destruction which nobody knew about before he told the world.

The first person to answer said, “Why is our media, that is supposed to be free and open, not telling us?” Why, indeed.

The signs the protestors were holding all referenced war for oil. Not one of them said, “No war for Israel” which would have been much more accurate. The reason no one had such a sign about Israel being the cause of the Iraq war is because of the point the BBC correspondent made – America’s media is almost exclusively kosher.

Information gathered goes through a Zionist filter prior to being released for general consumption. If the media masters think the facts could be damaging for Israel, then those facts are suppressed.

Case in point is Mr. Vanunu and Israel’s stockpile of nuclear and thermonuclear bombs along with their stockpile of biological and chemical weapons.

This should be front-page news along with demands that Israel either open up or be opened up for inspections of its WMD. Instead, hardly a word is mentioned about them and absolutely no words are spoken or printed calling for such inspections.

This shows great power, focus and design of the media manipulators. Especially since all other nations in the Middle East are under scrutiny regarding WMD.

With Nobel Prize winner Gunter Grass writing and publishing his heroic and fact filled poem, What Must Be Said, about Israel’s deadly WMD stockpile and its submarines which carry these deadly nuclear weapons all around the globe, we now KNOW that Israel can strike anywhere and anyone in the world with a nuclear attack.

The fact that the media does not cover this very real threat in-depth is solid evidence of who the “journalists” and editors are working for.

A fascinating article about just how Jewish the media is was written by Joel Stein. In his article he lists some of the most influential media figures in America which reveals a very, very kosher (I use “kosher” as a strongly negative word because kosher is a very negative and costly reality) media.

Mr. Stein’s article even brings out the fact that the chief executive of CBS, Leslie Moonves, is “so Jewish his great uncle was the first prime minister of Israel,” Ben-Gurion. (Moonves’ name may be derived from Ben-Gurion’s wife’s maiden name, Munweis.

As the kosher media and Israel and its political whores in Washington continue to move us to yet another unnecessary war for Israel’s benefit, this time with Iran, we need to educate everyone we possibly can for the real reason for the war. This will at least allow the sincere protestors to have more accurate signs which will read, “NO WAR FOR ISRAEL!”