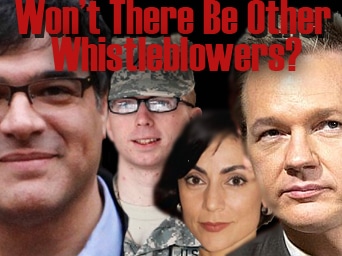 Dr.Paul Craig Roberts, former Assistant Secretary of the US Treasury, former Associate Editor of the Wall Street Journal, and professor of economics in six universities, wrote in A Story… The Last Whistleblower :

“The ability of whistleblowers to bring accountability to government is about to disappear.”

It was quite a story! I liked it.

Stories are all we shall hear someday because no one will have the courage or the opportunity to tell the truth.

But even story tellers must be careful.  Aesop told fables.  He invented the genre in fact, the fabulous story form.  And, he was hung by the neck until dead, dead, dead, because  some of his fables upset  some very important men.

George Orwell’s 1984 is a story.  No way it could be anything but fiction, right?  They didn’t hang George Orwell, but if he were alive today I have no doubts that there are people who would like to see him tried on a trumped up charge of treason or discredited in some way or another, if not actually hung.

They didn’t hang or kill Winston Smith, either, but he was effectively assassinated.

RT reports A newly released document acquired by Wired Magazine exposes the United States Defense Department’s torture techniques. In the 37 page report, former CIA official John Kiriakou warns the George W. Bush administration about the techniques that were being used on detainees and explains how they are against US law. His warnings went unheard of, until Kiriakou was indicted for leaking the information to the media.

David Swanson, campaigner for Roots Action, joins us with more.

GEORGE Bush, Dick Cheney, Tito Gonzales, David Levin, Keith Olbermann, many others have had their chance to speak, and their words to say on “waterboarding” and “ torture;”  “we do not,” “…we do, but it is legal.” “It is not,” “It is…” etc.

The bottom line of those with first hand experience seems to be that it hurts, damages, frightens the hell out of, and is persuasive enough to make almost anyone say what the teacher wants them to say, just to make it stop.

It would appear that “common sense” is not so common anymore. In fact, it’s becoming a rare, very rare, commodity throughout the world—particularly in North America.

An adjunct to Truth and Beauty, it is of no use in the politics of today’s world.

You can say anything you like. Call it what you like and, yes, the ignorant and ill-informed will believe you, if you say it forcefully and frequently enough, especially while standing in front of an altar, a flag or some such token of symbol of Truth, and Sincerity.

Words don’t mean anything anymore! Maybe, in this world where individualism is so important, we can write our own definitions, and if someone doesn’t like them, then we can, imprison them, holocaust, apartheid, genocide, or just kill them all, ship them out, or ban them from a web.

Or, we can brand them an anti-Semite and destroy their intellectual credentials and no one will ever listen to anything they ever say again.

Olbermann: Future Of The U.S. Depends On Torture Accountability