Home Veterans HART : What do Breivik and Netanyahu have in common? 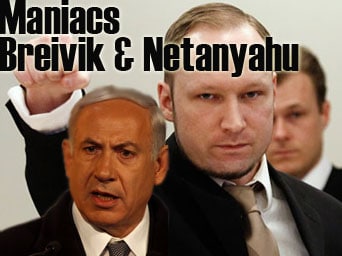 Let’s start with a glance at what they do not have in common. The man now on trial for killing 77 people in bomb and gun attacks in Norway last July has admitted, even boasted about, what he did. Netanyahu denies Zionism’s crimes.

The main thing they have in common stems from the fact that they both live in fantasy worlds of their own creation and talk a lot of extreme rightwing nonsense.

The nonsense Anders Breivik speaks is driven in general by his fears about the consequences for Norway of immigration and multiculturalism and, in particular, by his vision of an Islamic takeover.

The nonsense Netanyahu speaks is driven by his perception of Israel in danger of annihilation.

As he tells and sells it, the current biggest threat to Israel’s existence is, of course, Iran.  Arguably the single most ridiculous statement he has made to date on this subject was in 2006 when, as the chairman of Likud, he addressed a gathering of Jewish American organizations. He said then, “It’s 1938 and Iran is Germany.”

So what Breivik and Netanyahu have in common is, it seems to me, the mania of victimhood.

After confirming a Zionist offer to do business with Nazi Germany on terms outlined in a proposed agreement which stated that Zionist forces would “take part in the war on Germany’s side,” (the full story is in my book), Harkabi wrote this:

“It is doubtful whether the long history of the Jews, full as it is with oddities and cruel ironies, has ever known such an attempt to make a deal with rabid enemies – of course, ostensibly for reasons of higher political wisdom… Perhaps, for peace of mind, we ought to see this affair as an aberrant episode in Jewish history. Nevertheless, it should alert us to how far extremists may go in times of distress, and where their manias may lead.”

We know where Breivik’s mania led him.

We can only speculate about where Netanyahu’s mania will lead his Israel. On present course its final destination seems to be disaster. The question is, will it be disaster only for the Zionist enterprise or disaster for the region and possibly the whole world?

A generally accepted definition of mania (there are others) is “mental illness marked by periods of great excitement, euphoria, delusions and over activity.”