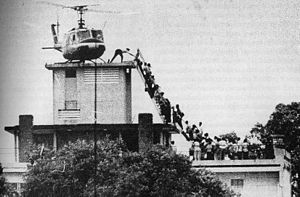 This coming April 30th, 2012, it will be 37 years since Saigon and South Vietnam fell to the communists. For the United States, it had been a long, controversial war which costs the lives of 58,261 Americans, eight of which were women, billions of dollars spent funding the war and it tore our country apart at home. When the gutless politicians wouldn’t send military aid in the form of equipment to support the South Vietnamese in its fight during this latest and last invasion by North Vietnam, South Vietnam fell under the dictatorship of the communists.

During the war in Vietnam, twice before the North Vietnamese communists tried to invade the South with massive troops and firepower but each time with American support, consisting of men and military equipment, the communists were turned back and they went home to “lick their wounds.” TET, the Vietnamese New Year in February, was the first massive incursion in 1968 when there was a supposed “cease fire” agreed upon by the opposing forces. With most of the South Vietnamese military on leave to enjoy the holiday with their families, the communists launched a sneak attack on most of the major cities in South Vietnam and this happening while they had the United States Marines surrounded at the military outpost in the northern part of South Vietnam, Khe Sanh. Both battles resulted in a resounding defeat for the North Vietnamese Army and the communists guerilla fighters in the south, the National Liberation Front or more commonly referred to by the American military, Viet Cong. Unfortunately, the mass protests in the streets of America by the college students, for the most part, gave incentive to the government of North Vietnam to just hold on and turned a military victory for the United States into a political defeat. That is not just my opinion but that of many historians as the North Vietnamese leadership at that time in Hanoi were ready to seek peace because of the extensive amount of casualties to their forces. The communists suffered mass causalities as North Vietnam’s vision of the South Vietnamese military and civilian population joining forces with them and the Viet Cong to oust the Americans never materialized.  North Vietnam’s leadership were thrilled at the unrest taking place in the United States with the mass demonstrations against the war in Vietnam during TET 1968 and they were willing to risk as many lives for their cause, which they did, as it would take to finally bring communist rule to the south.

As President Nixon was withdrawing the America troops from South Vietnam, from a high of 536,000 Americans in military uniform in 1968 to only 24,000 when North Vietnam once again tried to extort their will on the people of South Vietnam in what has become known as the 1972 Easter Offensive. The United States and South Vietnam once again thwarted North Vietnam’s advance with the use of massive American air power. The communists crossed into South Vietnam with an immense amount of troops, artillery pieces and tanks but were defeated again and turned back. Even though there were still anti-war and anti-military protests on the streets and college campus’ of America, those demonstrations paled in comparison as the war in Vietnam was winding down, the draft lottery had been put into law and the threat to the personal safety and comfort of those going to college and having to serve in the military and fight in Vietnam was dissipating fast. By 1975 there were no American troops in South Vietnam and with Nixon resigning as President of the United States in 1974 because of the Watergate scandal and Congress having passed a law in 1973 to prohibit the military intervention Nixon had promised in case of a North Vietnamese invasion, the CASE-CHURCH Amendment, South Vietnam was doomed.

The communists of North Vietnam were more surprised than anybody that South Vietnam fell as fast as it did but with the South having a shortage of ammunition, artillery pieces, aircraft, aircraft parts and fuel, it would all soon be over. Finally, on April 30th, 1975 North Vietnamese tanks were at the Presidential Palace in Saigon and with the surrender by General Duong Van Minh (“Big Minh”) the President of South Vietnam, the war ended. Up to the hours leading up to the surrender, the United States Marines conducted a massive evacuation of South Vietnamese by helicopter to the American Fleet in the South China Sea. OPERATION FREQUENT WIND which was the code name for the evacuation was to get as many high ranking South Vietnamese government officials and South Vietnamese Army personnel out of the country that would have been persecuted by the communists. Our Marines, under very difficult and strenuous conditions, were magnificent as helicopter crews flew thousands of our allies to the American 7th Fleet off shore in the South China Sea and a contingent of American Marines kept the American Embassy from being overrun by South Vietnamese that had a very real concern for their safety, wellbeing and their very lives.