This week, the Federal government banned Ted Nugent from hunting on their public land because of violations, not exactly “poaching.”

You see, Nugent, cashing in on huntintg TV show, wounded a bear in Alaska, being the “expert” he is, and went out for a second try without tracking down the first one.  That is against the law.

However, when the Secret service came to see Ted, he “ate his words” and backed down, not for the thousandth time it seems:

Use of the violent metaphors earned Nugent a visit from Secret Service agents on Thursday. He said Friday on his website that he had with them a “good, solid professional meeting concluding that I have never made any threats of violence toward anyone.”

This still got Nugent banned from military bases, also not for the first time.  As you will read before, when called to Fort Wayne in Detroit for his draft physical, Nugent smeared himself with feces.

This is the same place I entered the Marine Corps, where nearly 3500 who died in Vietnam entered the service.

I wasn’t there on the day Nugent showed up for his physical, if his story, listed below, is actually true.  I suspect it is all fiction as he wouldn’t have made it home that day as you might guess.

But then, Ted, some of the worst trash Detroit has ever produced, is above the law.  We won’t talk about how many strings he had to pull, how hard the NRA had to beg and plead so he wouldn’t be arrested for his threat against the president.

It would be different if anyone had reason to be afraid of Nugent.  This ain’t Chuck Norris, not by a long shot.

First, let’s enjoy this interview with High Times Magazine that Ted Nugent did back in  October 1977.  As a Marine combat vet who served in Vietnam, a fellow Detroiter who knows many of the same folks Ted does, surprisingly many, first we hear it from his own mouth.

I actually get dodging the draft, it is a GOP tradition but this makes the stories Rush Limbaugh, Dick Cheney and even George W. Bush could but have the sense “not to ” tell, make them seem like heros.  Enjoy.  This is the kind of people that the NRA is made up of:

“High Times:  How did you get out of the draft?

Ted Nugent: Ted was a young boy, appearing to be a hippie but quite opposite in fact, working hard and playing hard, playing rock and roll like a deviant. People would question my sanity, I played so much. So I got my notice to be in the draft. Do you think I was gonna lay down my guitar and go play army? Give me a break! I was busy doin’ it to it. I had a career Jack.

If I was walkin’ around, hippying down, getting’ loaded and pickin’ my ass like your common curs, I’d say “Hey yeah, go in the army. Beats the poop out of scuffin’ around in the gutters.” But I wasn’t a gutter dog. I was a hard workin’, motherf***n’ rock and roll musician.

I got my physical notice 30 days prior to. Well, on that day I ceased cleansing my body. No more brushing my teeth, no more washing my hair, no baths, no soap, no water. Thirty days of debris build. I stopped shavin’ and I was 18, had a little scraggly beard, really looked like a hippie. I had long hair, and it started gettin’ kinky, matted up.

Then two weeks before, I stopped eating any food with nutritional value. I just had chips, Pepsi, beer-stuff I never touched-buttered poop, little jars of Polish sausages, and I’d drink the syrup, I was this side of death, Then a week before, I stopped going to the bathroom. I did it in my pants. poop, pi** the whole shot. My pants got crusted up.

See, I approached the whole thing like, Ted Nugent, cool hard-workin’ dude, is gonna wreak havoc on these imbeciles in the armed forces. I’m gonna play their own game, and I’m gonna destroy ‘em.

Now my whole body is crusted in poop and pi**. I was ill. And three or four days before, I started stayin’ awake. I was close to death, but I was in control. I was extremely antidrug as I’ve always been, but I snorted some crystal methedrine. Talk about one wounded motherf****r.

A guy put up four lines, and it was for all four of us, but I didn’t know and I’m vacuuming that poop right up. I was a walking, talking hunk of human poop. I was six-foot-three of sin. So the guys took me down to the physical, and my nerves, my emotions were distraught. I was not a good person. I was wounded. But as painful and nauseous as it was – ‘cause I was really into bein’ clean and on the ball – I made gutter swine hippies look like football players. I was deviano.

So I went in, and those guys in uniform couldn’t believe the smell. They were ridiculin’ me and pushin’ me around and I was cryin’, but all the time I was laughin’ to myself. When they stuck the needle in my arm for the blood test I passed out, and when I came to they were kicking me into the wall. Then they made everybody take off their pants, and I did, and this sergeant says, “Oh my God, put those back on! You f*****g swine you!”

Then they had a urine test and I couldn’t pi**, but my poop was just like ooze, man, so I poop in the cup and put it on the counter. I had poop on my hand and my arm.

The guy almost puked. I was so proud. I knew I had these chumps beat. The last thing I remember was wakin’ up in the ear test booth and they were sweepin’ up. So I went home and cleaned up.

They took a putty knife to me. I got the street rats out of my hair, ate some good steaks, beans, potatoes, cottage cheese, milk. A couple of days and I was ready to kick ass. And in the mail I got this big juicy 4-F. They’d call dead people before they’d call my ass. But you know the funny thing about it?

I’d make an incredible army man. I’d be a colonel before you knew what hit you, and I’d have the baddest bunch of motherf****n’ killers you’d ever seen in my platoon. But I just wasn’t into it. I was too busy doin’ my own thing, you know.”

Funny thing, Ted, but we don’t remember a lot of call for “shit snorting” in Vietnam.  But, if there is every a Blowhard of the Year award, and we may well put one out, Ted Nugent along with Mitt Romney, Rush Limbaugh and the “Chickenhawk” list will all get at least something from us, perhaps something they won’t enjoy.

Here is the official list from the New Hampshire Gazette. 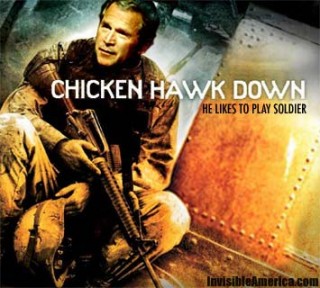 When an American male (or an especially belligerent female) makes the challenging transition from late adolescence into early adulthood, he is faced with many decisions.

One certain, specific combination of choices will result in his becoming a chickenhawk: choosing to “support” war, while also choosing not to serve in the military. His motto becomes: “Let’s you and him go fight; I’ll hold your coat.”

Depending on external circumstances, such an individual may become one of three varieties of chickenhawk:

• If there is no draft, and the nation is at peace, the individual becomes a Common Chickenhawk;

• If there is a draft, and the nation is at peace, the individual becomes a Chickenhawk First Class;

• If the there is a draft, and the nation is at war, the individual becomes a Chickenhawk First Class with Distinguished Fleeing Cross.

We currently have 154 Chickenhawks listed in our database. Here they are, listed alphabetically. Click here to see them listed by date of birth.