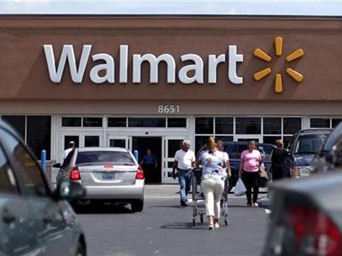 An Associated Press report exposing the government bribing culture of Walmart Stores, Biggest business in North America, popped up over the business news recently. Read the reader’s comments after the story.

Here in the USA, folks either love the low prices or hate the crassness of it all. One needs to understand the schizophrenic pools of thought that are a typical Middle class phenomenon demonstrated by the comments to the sources of information.

The documentary video featured here and again in that column is produced by Union opponents of the cost-cutting colossus. Labor unions are the backbone of America’s working class, which also provides the bulk of Walmart’s cart-pushing shoppers. Thus a basic conflict exists among consumers.

Henry Fords assembly line innovation provided automobiles his workers could afford, but that is no longer a relevant model; The relevant model is crass, disgusting, anti American fascism that became “normal” in our time.

It is the open fascist model Walmart utilized to become so rich and famous that sticks in my craw, but goes hardly noticed in our braindead, cheap-seeking slave camp.

Walmart gets so much subsidy from various levels of government, there is absolutely nothing “free enterprise” about it. No wonder they are hated by traditional family enterprise that took decades to build community infrastructure only to have corrupt local governments sell them out just like was done for the railroad barons in early America, where such fascism was perfected. Only in that sense should Sam Walton be considered a pioneer.

Watch the damning video for the clear illustration of crony capitalism, which is media speak to avoid the dread F-word associated with Mussolini and Hitler, but really should be associated with bankster corruption and the “Crown.”(Which cannot be named in media or schools today.)

Unions pose another mind bender for Americans. Our history of trying to break the surface for a gulp of air while under the mercantile repressions of the Crown led working stiffs to seek strength in numbers—unions were formed with grit and blood; they became a proud tradition in the same sense as our military and our police—but were quickly corrupted by the might of Mammon and the frailty of humans behaving.

Gus Russo’s book Supermob exposes the way Unions have been operating more clearly than most. If you read it any respect you may have held for Ronald Reagan will evaporate, and any loathing you feel for “Khazars” will expand.

Experiences taught me to go it alone rather than go with any union organization when I was young, strong, hardworking and always broke. My family never liked unions, but I do see the need.

Only the medieval church “dark ages” ever produced a culture that practiced the “just wages” notions of early Christendom. It didn’t last long as the mercantilists took over church estates and returned wage slavery across England and Europe. The Institution itself corrupted as power tends to do.

Matthew 11; 28-30 deals directly with the problem, but it is not easy for most folks. There are no easy answers for our human dilemma, so we have everything to gain and nothing to lose by heeding the red letter offer.

Come unto me, all ye that labor and are heavy laden, and I ill give you rest. Take my yoke upon you, and learn of me; for I am meek and lowly in heart: and ye shall find rest unto your souls. For my yoke is easy, and my burden is light.

Listen to the TV analysts rationalize the Walmart “culture” on the recent video report—documents the theme—fascism forgiven by cheap goods craving.