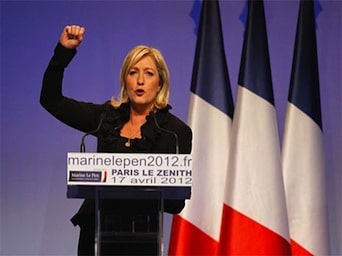 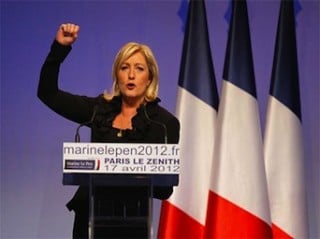 Marine Le Pen and The French’s Front National are the big winners in the French elections yesterday. France’s Front National scored the best ever presidential campaign first-round result (18% of the votes).

As elsewhere in Europe, the French far right is dealing with matters other political parties prefer to avoid or shove under the carpet. Yesterday results proves that many French are primarily concerned with issues to do with immigration and ‘identity loss’. While the so called ‘far Right’ engages with these matters, the Left and the Centre parties perform an escapist attitude – they prefer to vet the discussion via different means such as political correctness and even legislation. The media, would also shy away from the subject and would prefer to gate-keep any attempt to deal with the ‘unpopular’ topic.

Le Pen’s victory is clearly an alarm call. As the financial turmoil starts to bite, it becomes clear that we are dealing with a ticking bomb. The way to defuse the situation is to launch a free and open discussion on maters to do with ‘belonging’, ‘identity’ and ‘culture’. The Left has been confused about it all for decades. European Left is riddled with contradiction, it would, for instance, support national movement around the world but never at home. The Left would adorably support Palestinian nationalism in Gaza and the West Bank but it would oppose similar English or French patriotism at home. How do we explain or justify such an unprincipled political attitude?

The Guardian refereed to Le Pen today as a ‘populist appeal’. It obviously missed the point once again. Le Pen is popular because she touches some (unpopular) issues no one else, (including the Guardian) dares to touch. It is in fact the Guardian and other media outlets that present a populist approach maintaining some delusional notions of correctness that appear to be detached from the reality in which we are living in.