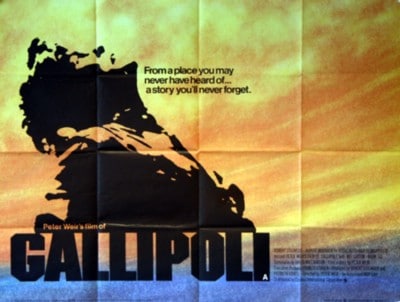 A Dual Salute to the Lighthorse Brigades at Gallipoli and Beersheba 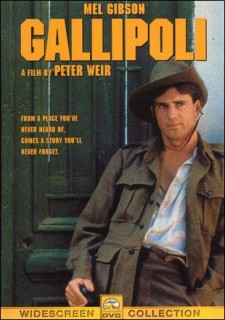 I have to admit that I had no personal feel for the Australian military until seeing the movie Gallipoli with it’s tragic charge at the end. Well done movies have always been a good way to blow historical cobwebs off of buried soldiers and bring them to life again.

But the WWI grim reaper, being the equal opportunity employer that it was, hoovered up all the colonial manpower it could find.

Gallipoli is a classic now. A young Mel Gibson went on to greater fame, while fellow runner Mark Lee did not reach those heights. But he still owns a piece of the Gallipoli movie, courtesy of all who have seen it.

WWI was filled of instances where men going into an attack were fully expecting to die. The final charge scene in Gallipoli I think sets a record for dramatizing the retrospective last moments of those about to die.

I have watched it over and over to catch make sure I did not miss a detail. This was intimate film making at it’s best and Peter Weir wears a gold star for it.

Winston Churchill, the moma’s boy looking for fame and fortune should have been in this charge. But he went on to be one of the most overrated men in history, and a traitor to his country and the Army going back to the Boer War.

But his career had nine lives, which he used. But we pee on Winston today, and all those like him, and honor their victims for their bravery with our sadness for their wasted lives.

We salute all the poor souls who charged into nothingness, for nothingness. And we all here will try to prevent from happening again, for the same reasons generally…someone’s commercial interests.

Here is a 7 minute clip of the last scene but the last half is all credits. It always makes me sad to watch it.

Video and battle photos below

The Charge of the Light Horse at Bersheeba is another WWI classic, although lesser known. The movie seems to have been made after Gallipoli,trying to piggyback on it’s fame, not unusual in the film business. But the battle itself is one of history great cavalry charges.

After two failed frontal attacks on the Gaza-Bersheeba line, the British decided to chance a desert attack further inland where the lack of water had convinced the Turks it was unlikely. But British engineers constructed a forward pipeline to the staging are of the Army corp group attack. Wikepedia has a good description:

The problem for Chauvel (attacking cmdr.) was acute. The attack on Tel el Saba had stalled, as 300 Ottoman infantry dug in at the summit held up the attack. The German commander Friedrich Freiherr Kress von Kressenstein summarised the situation as:

The understrength Turkish battalion entrusted with its defence doggedly held out with great courage and in so doing fulfilled its obligation. They held up two English (sic) cavalry divisions for six hours and had prevented them from expanding their outflanking manoeuvres around the Beersheba-Hebron road.[5]

Chauvel had planned to use the British Yeomanry for a charge with swords at Beersheba. After Tel el Saba had finally been secured, Chauvel dithered for about half an hour, contemplating a retreat with the intention of finishing the battle the following day.

He sent his thoughts to Allenby, who about half an hour later responded with a furious order that Chauvel was to take Beersheba that very day.

In the meantime, reports began filtering in that the Ottoman forces were abandoning Beersheba in accordance with the Ottoman plan of defence. The Ottoman withdrawal began in an orderly manner with the cavalry and artillery withdrawing to the safety of the hills to cover the infantry withdrawal. The map below shows the Light Horse attack from the East (left). 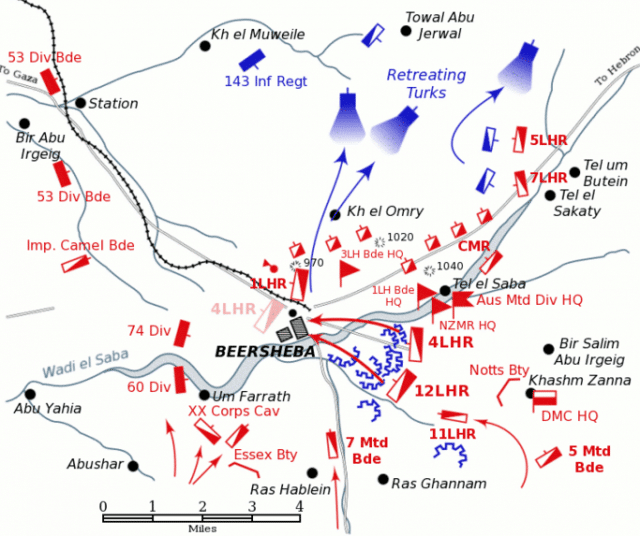 Chauvel realised that he was in danger of capturing Beersheba without the considerable Ottoman defensive forces stationed in the town. He decided to take action. The Yeomanry could not be used immediately as they were too dispersed, and with time running out, he stated: “Put Grant straight at it.”[6]

The Australian 4th Light Horse Brigade, commanded by Brigadier William Grant, contained the 4th, 11th and the 12th Light Horse Regiments. The 11th was dispersed but the 4th and 12th were quickly ready to make the charge. Although Grant commanded the Brigade, the charge on Beersheba was led by Lieutenant Colonel Murray William James Bourchier.

On 31 October 1917 he led the 4th and 12th Regiments in the four-mile charge against Turkish positions at the Battle of Beersheba, capturing 15 of the 17 wells intact and taking over 700 prisoners.

The plan for the attack was devised by Lieutenant Colonel Donald Cameron who later described the circumstances in a letter to Dr C.E.W. Bean in 1928:

It was clear to me that the job had to be done before dark, so I advised galloping the place as our only chance. I had some experience of successful mounted surprise attacks on the Boer camps in the South African war.[7]

The men lined up in three consecutive squadrons, the first two, “A” then “B” Squadrons assembling in line of troop while the last squadrons, “C” Squadron assembled in line of column. The closest line started six miles from the town.

A hand drawn map was made created by Lieutenant F.R. Massie, Adjutant of the 12th Light Horse Regiment which illustrated the lines prior to the famous charge.[8]

As the Light Horse were mounted infantry rather than cavalry, Ottoman and German forces usually waited for them to dismount before opening fire. The regiments commenced the advance at 4.30 pm, the 12th on the left and the 4th on the right. They advanced by squadrons (i.e., three waves) with about 500 yards between squadrons.

The first half mile was covered at a walk with the next mile at a trot.[9] The first line then commenced the charge. Realising the Light Horse were charging, Ottoman artillery opened fire with shrapnel but it was ineffective against the widely spaced horsemen.

Ottoman machine-guns that opened fire from the left (which might have inflicted heavy casualties) were quickly silenced by a battery of horse artillery.

When the line of horsemen got within range of the Ottoman riflemen in the trenches, they started to take casualties.

But the defenders failed to allow for the speed of their approach so once they were within half a mile of the trenches, the defenders’ bullets started passing overhead as they found it difficult to alter the sights on rifles quickly enough when confronted with rapidly moving horsemen. This kept the numbers of casualties low for the charging Light Horsemen.

The light horsemen jumped the front trenches, one and a half miles from the town, and dismounted behind the line where they turned and engaged the Ottoman forces with bayonets. The Ottoman forces were in many cases so demoralised that they quickly surrendered.

One Australian, who was dazed after having his horse shot from under him, recovered to find his five attackers with their hands up, waiting to be taken prisoner.

The later waves of horsemen continued through the town which the Ottoman forces were abandoning in a panic.

The charge was finally halted on the far (north-west) side of Beersheba where the light horsemen encountered more Ottoman defences.

Isolated resistance in the town continued for a little while but by nightfall, the remainder of the garrison had been captured. The Ottomans had attempted to set fire to some buildings and blow up the railway, but the majority of the wells (15 out of 17) were captured intact. Also, a heavy rainfall left temporary pools of water on the ground, allowing the horses to drink.

In a later report, Bourchier summed up the effect of the attack:

In commenting on the attack I consider that the success was due to the rapidity with which the movement was carried out.

Owing to the volume of fire brought to bear from the enemy’s position by machine-guns and rifles, a dismounted attack would have resulted in a much greater number of casualties.

It was noticed also that the morale of the enemy was greatly shaken through our troops galloping over his positions thereby causing his riflemen and machine gunners to lose all control of fire discipline.

When the troops came within short range of the trenches the enemy seemed to direct almost all his fire at the horses.[10]

He also noted that “this method of attack would not have been practicable were it not for the absence of barbed wire and entanglements.”[10]

[Editors Note: Rifleman engaging charging cavalry at distance of 1600 meters takes a miracle shot to hit one. The dust of the first line charging effectively masks the second and third.  And the Anzac artillery taking out the machine guns early…good recon and soldiering there.]

After the capture of Beersheba, Allenby’s order directing Chauvel to take the town by night fall arrived. The action of the 4th Light Horse Brigade had saved the opening offensive of the Third Battle of Gaza and with it, Chauvel’s reputation.

Sorry folks, no HD footage here but I did find this 480p clip, make sure you select that and the mid size screen for vest viewing. You are about to watch the movie version, fairly accurate, of Australia’s greatest cavalry charge. We salute the Light Horse Brigades on their Memorial Day.

He received the Distinguished Service Order on 4 November 1917:

“ For the gallant and capable manner in which as Commanding Officer of the 4th Australian Light Horse regiment he personally directed his Regiment into action on the attack on BEERSHEBA on the 31st October, 1917.

This officer, by his skilful handling of his Regiment and by his magnificent example of courage and determination, was very largely instrumental in the success of the attack and capture of the town. ”

In September 1918 Bourchier again commanded a joint force of the 4th and 12th Regiments (“Bourchier’s Force”) in the final advance on Damascus, capturing 12,000 Turks. 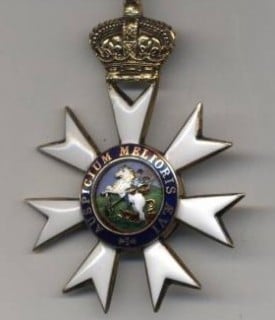 He was awarded the Companion of the Order of St Michael and St George on 3 June 1919 for the following recommendation:

“ In the face of a very heavy fire this officer led his regiment on 27th Sept. across the JORDAN below JISR BENAT YAKUB over a very difficult crossing and thus outflanked the enemy and compelled his to withdraw from the position.

On the 30th Sept. this officer was in command of the 4th and 12th A.L.H. [Light Horse] Regiments which formed the advanced guard of the [Australian Mounted] Division in its advance from SASA to DAMASCUS.

He captured the enemy’s position at KAUKAB by a spirited mounted charge of two Regiments without any delay and thus opened the way to DAMASCUS where his troops were the first to enter. ”