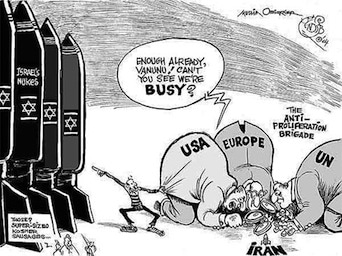 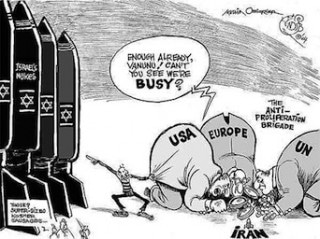 For a very short while I was cheered by what seemed to be a ‘Jewish institutional move’ in the right direction. I thought to myself, that at last, a Jewish leadership positions itself at the forefront of the battle for peace and reconciliation. Finally, we will see a Jewish political call against an Israeli preemptive attack against Iran. The shekel has dropped, I thought to myself. But I was obviously wrong, in fact totally wrong. The shekel may never drop. As it seems the European Jewish Congress is concerned with one thing i.e. Jewish ‘potential’ suffering and, of course, the ‘rise of antisemitism’.

Moshe Kantor, president of the European Jewish Congress, said he feared a “minority of angry, extremist European Muslims who live in impoverished neighborhoods might use an Israeli attack as a pretext to hit local Jews, particularly in France and Great Britain.”

Seemingly Kantor wasn’t concerned at all with the possibility of losing millions of innocent lives in the region. He wasn’t even concerned with the possibility that an Israeli attack could easily escalate into a regional nuclear conflict that may radioactively contaminate the entire region and some large parts of Europe.

Moshe Kantor, the president of the European Jewish Congress, an umbrella organization that claims to represent some 2.5 million Jews in Europe, is concerned with Jews only.

“If Israel attacks Iran, it will be a dramatic increase of anti-Semitic, very violent attacks against Jews,” he said.

Seemingly, there is no limit to Judeo-centrism, yet, I believe that Jewish leaders would do themselves and their communities a big favour if they, at least, make an effort to disguise their apparent lack of universal empathic consciousness and total carelessness for the rest of humanity.

This morning, three more siblings have joined the three baby green sea turtles that hatched Sunday in a climate-controlled room at the University of Delaware’s College of Earth, Ocean, and Environment in Lewes. Early tomorrow morning, the six tiny turtles will embark on the first leg of their journey back to the sea. Since ocean temperatures off the Delaware coast are now too cold for the newly hatched turtles, the turtles, along with more than 180 unhatched eggs, will be transported to Morehead City, N.

C., where they will be released into warmer waters.

The green sea turtle is protected as an endangered species in Delaware and as a threatened species federally, requiring anyone having contact with the species to follow strict regulations. As a result, for more than four months DNREC biologists have been working closely with the U. see here green sea turtle

S. Fish and Wildlife Service’s Florida office and the North Carolina Wildlife Resources Commission to ensure compliance with all requirements.

DNREC Biologist Edna Stetzar of the Natural Heritage and Endangered Species program said the details of the trip are being finalized today with the USFWS and the North Carolina Wildlife Resources Commission. Dr. Matthew Godfrey, coordinator of the Commission’s Sea Turtle Project, will take custody of the turtles and eggs at the North Carolina University Marine Lab.

“Dr. Godfrey has been working with us every step of the way since we found the nest in August,” said Stetzar. “He has a regular routine for helping these turtles. They will go to the Pine Knolls Aquarium to make sure they are properly hydrated and to wait for arrangements with a charter boat to take them out into the ocean for release. The remaining eggs will go into an incubator, with hopes that more will hatch.” Prior to the journey south, biologists and volunteers from the Marine Education, Research and Rehabilitation (MERR) Institute who have been monitoring the eggs around the clock are keeping the lights low and noise to a minimum to avoid disturbing the new hatchlings while watching closely for the arrival of additional siblings.

Back on Oct. 5, DNREC Fish and Wildlife biologists and MERR volunteers had moved a clutch of nearly 190 eggs from the beach at Cape Henlopen State Park to the University of Delaware’s Lewes facility for incubation. For two months, the eggs were closely monitored at optimal hatching temperature of about 80 degrees. At about 3:50 p.m. on Sunday, Dec. 4, while performing her regular checkup on the three containers of eggs in their temperature-controlled room, MERR volunteer Janice Pinto noticed movement – and excitedly picked up the phone. By late evening, three turtles – each about the size of a silver dollar – had emerged from their ping-pong-ball-sized eggshells. this web site green sea turtle

“Typically, it takes an average of about 60 days for green sea turtle eggs to hatch, but development of these eggs was delayed due to the low sand temperature they were exposed to, so it is taking them a bit longer,” said Stetzar. “As of today, these eggs have been incubating for about 110-111 days.” Stetzar was part of the 15-member team that painstakingly excavated and moved the eggs in an effort to save them from rapidly cooling sand temperatures that threatened their chances of survival. Sea turtles usually lay their eggs in warmer climates, she added, noting this is the first recorded green sea turtle nest in Delaware. The life cycle of green sea turtles on the United States’ Atlantic coast normally begins with new hatchlings entering the Gulf Stream for a fast and furious migration offshore. How long they remain in the open sea and exactly where they go is largely unknown during this oceanic phase.

“This is such an exciting day,” said MERR Executive Director Suzanne Thurman. “It has been a successful collaborative effort, and we never gave up hope for these little ones, so it’s great to have an outcome like this.” “Slow and steady won the turtles’ race to Delaware’s beaches for nesting last summer,” said Gov. Jack Markell. “Now we will send the baby sea turtles on a speedier journey to North Carolina for nurturing in their native habitat. Green sea turtles are a rare sight in Delaware, but our environment – some of the cleanest beaches in the country – was very hospitable to them in their time of need.” “What an amazing story of survival against all odds. Now, thanks to good teamwork between DNREC Fish and Wildlife staff, the MERR Institute and our federal partners in the U.

S. Fish and Wildlife Service, these hatchlings will be going home to the ocean,” said DNREC Secretary Collin O’Mara. “We hope they will grow up to help the recovery of their species – and maybe one day, one of them or their children will return to Delaware shores to lay eggs of their own.” Since the nest’s discovery by a Delaware State Parks ranger who observed the green sea turtle mother laying the eggs near a jetty on Aug. 18, it has been threatened by high tides, predators, hurricanes and tropical storms. The nest was first protected from the encroaching tide by moving it to higher ground, and then protected from predators by erecting an enclosure around the site and posting 24 hour guard. A week after the first move, Hurricane Irene deposited a heavy14-inch layer of sand on top of the nest. After being carefully excavated by hand from the effects of Irene, volunteers were faced with the same task after Tropical Storm Lee.

Then the sand became too cool to sustain the eggs. After USFWS granted permission to move the nest, the Dean and faculty of the UD College of Marine Science and Policy offered their temperature-controlled Lewes facility to incubate them. Once they arrived, MERR and University officials worked together to install a series of cameras so that the three containers of eggs could be monitored around the clock by volunteers to look for any movement.

“The fact that some of the eggs have survived, despite weathering a hurricane and being dug up and moved twice, is a testament to the hardiness and survival ability of sea turtles. They are truly amazing animals that will hopefully survive and thrive well into the future,” Stetzar added.