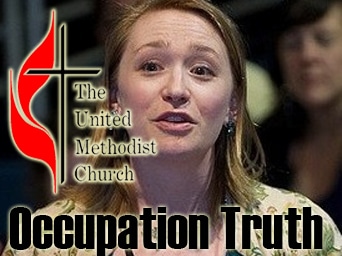 The mainstream media does not know it, and far too many high steeple church folk do not want to know it. 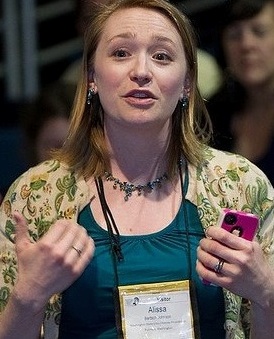 But in Tampa, Florida, this week, the General Conference of the United Methodist Church will make a decision.

They will spend the week writing and rewriting. Some, like  Alissa Bertsch Johnson, a campus minister at Washington State University (at right), will passionately state their case.

Before the gavel falls on the last session of the 2012 General Conference, the people called Methodists will have responded, one way or another, to the call from Palestinian Christians that they take one small step toward ending the Israeli Occupation.

They may vote to endorse a targeted divestment resolution.

Or, they may declare that such action is not needed, forgetting that in doing so, they follow the path of those segregation-tolerating Birmingham church leaders who wrote to Martin Luther King, Jr., in words to this effect, “it is too soon to attack this evil. We must wait until our people are with us.”

A half century since King died in his battle with the evil of racism, we are still waiting for the end of  yet another manifestation of racism, one which continues to be tolerated, and even worse, financially sponsored, by the spiritual heirs of those earlier Birmingham church divines to whom King wrote his historic letter from a Birmingham jail.

In Martin Luther King, Jr’s, time, the “go slow” church leaders tolerated the evil that was in Selma, Alabama, the suburbs of Chicago, and the dark, frightening country roads of Mississippi.

In our time, “go slow” religious leaders refuse to see the evil of a so-called security barrier, a wall built not for Israel’s security, but as a land-stealing, prison enclosure, of the Palestinian people.

The “go slow” church leaders, and the parishioners they lead, choose not to acknowledge that the evil of Selma, Alabama, the South Side of Chicago, or the country roads of Mississippi, are still with us in Palestine where US church funds are used to build and maintain an Occupation.

The final United Methodist divestment vote will involve a resolution that instructs the church’s financial managers to divest from three American corporations that have refused to cease from profiting from the Occupation.

Israel’s supporters who have infiltrated the United Methodist legislative body, both as delegates and observers, are waging the divestment effort with half truths and outright lies, the same tactic used by secular politicians for whom  truth-speaking is an unknown language.

During the first week of the General Conference, delegates met in committees and sub committees to hassle over the wording of the final resolution. Occupation supporters want language in the resolution they can spin in their favor.

Above all, they want to remove the term “divestment”, which evokes the image of Israel as a modern day South Africa. In the past, one way to avoid this image is to employ evasive language like “constructive engagement”.

The winner of the resolution game will be the side that can spin the final action with its own special twist that produces a victory headline.

No matter how you spin it, as James Carville once said in an earlier political conflict, “its the Occupation, stupid”.

Remember well the names of the three corporations which refused to listen to those for whom “going slow” has meant a continuation of humiliation and suffering.

They refused to listen to the case delegations of United Methodists have made to them to stop supporting the Occupation. Call this step, the failure of “constructive engagement”.

After several of these failed efforts to persuade the three corporations to cease and desist from  causing the suffering of others, activist United Methodists decided  to write specific divestment resolutions.

These resolutions were debated in local churches, then taken before regional conferences, and finally, this week, presented  to the United Methodists’ highest legislative body, the General Conference.

The three US corporations targeted by this resolution are Caterpillar, Hewitt Packard and Motorola, each of whom heard the pleas for support from Palestine, and hearing, passed by on the other side of the road.

United Methodists cannot halt the brutalization of the Palestinian people carried out by the Occupation.

Nor can they end the downfall of the state of Israel, a downfall most certain to take place unless this illegal and inhumane Occupation ends. No one knows this better than Jews who love Israel and hate what the Occupation does to both the Israelis and Palestinians.

Look not to the mainstream media for news of the internal conflict within world Judaism over this issue. Go instead to the internet and foreign media, and there you will find that the conflict is joined. 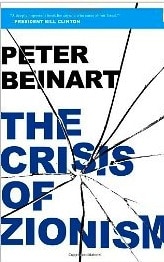 A respected Jewish writer and former New Republic editor, Peter Bienart, wrote a book he called The Crisis of Zionism, a plea for Israel to wake up from its nightmare of Palestinian oppression. He was viciously attacked by  neo-conservatives and right-wing Jews.

Ha’aretz knows that New York Times columnist and Nobel Prize winner Paul Krugman steers clear of  this topic. His speciality is economics, not politics. But Ha’aretz reported a blog comment from Krugman which revealed his support for Beinart.

Paul Krugman believes that the policies of the current “narrow minded” Israeli government “are basically a gradual long-run form of national suicide.”

Writing in his New York Times blog “Conscience of a Liberal” about Peter Beinart’s controversial book The Crisis of Zionism, Krugman writes, “Like many liberal American Jews I basically avoid thinking about where Israel is going.

It seems obvious from here that the narrow-minded policies of the current government are basically a gradual, long-run form of national suicide – and that’s bad for Jews everywhere, not to mention the world.”

The battle also rages within the highest Israeli political circles.

Diskin said the pair “is not worthy of leading the country”.

“My major problem is that I have no faith in the current leadership, which must lead us in an event on the scale of war with Iran or a regional war,” Diskin told the “Majdi Forum,” a group of local residents that meets to discuss political issues.

He also addressed the issue of racism in Israel.

“Over the past 10-15 years Israel has become more and more racist. All of the studies point to this. This is racism toward Arabs and toward foreigners, and we are also become a more belligerent society.”

Why do United Methodist delegates have to ponder more than a few seconds to realize that for the UMC to continue to support Israel’s Occupation with church funds, places the denomination on the wrong side of  the battle for Israel’s soul.

Israeli blogger Larry Derfner writes a post this week, “Israelis are living in a fear society, not a free society”, which is another reminder that the Occupation is not in the best interest of either Israelis or Palestinians.

Enabling a “fear society” is not the way American religious communities can best serve the cause of either peace or justice.

British Parliamentarian William Wilberforce, whose political activism had been influenced by John Wesley, did not end slavery, but he did finally persuade  the British Parliament to end the slave trade from British seaports.

It took him several decades to end the trade. During those decades, many slaves were transported to America from Africa as the British Parliament followed the political “go slow” policy in which evil flourishes.

American politicians, bought and paid for by forces that reward them for their absolute loyalty to the current right-wing Israeli government, have closed their minds, and most certainly, their hearts, to the injustices of the Occupation. 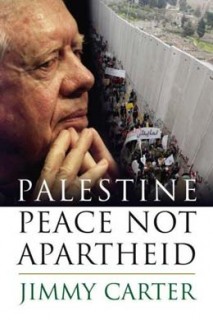 One day, when these politicians look back on their period of political service, they may recognize the evil they sponsored.  And one day, when United Methodist delegates to the 2012 General Conference look back on how they voted on the divestment resolution, they will realize how their vote will follow them into the Hereafter.

And there, I truly do hope they will be invited to one of Brother John Wesley’s heavenly society meetings where they will be confronted by the reality of the evil Occupation they tolerated for the sake of what they liked to call, “the delicate fabric of interfaith relations”.

What Wesley will say to them about that delicate fabric is chilling to contemplate.

A good preparation for watching how the United Methodist General Conference delegates will conduct themselves in the week ahead, is to spend some time attending to a 25 minute newscast discussion produced by Al Jazeera.

You will find appearances by former President Jimmy Carter, two Jewish panelists, Max Blumenthal and MJ Rosenberg, and Walt Davis, a major leader in the Presbyterian Church, the second Protestant denomination to vote on a divestment resolution during their national meeting this summer.

In his brief appearance at the start of the newscast, President Carter corrected the Al Jazeera host who surprisingly used the lie that Israel wants the world to hear, “boycott”, in describing the United Methodist and Presbyterian resolutions, neither of which use the term.

Carter points out, in his careful manner, that the two denominations are calling on their own leaders to divest from three US corporations. He quietly notes that they are not calling for a boycott of the Israeli economy. It is obvious that Carter follows this issue closely.

Click on the screen below to view the video. Watch it in segments, if you prefer. But watch it.

The picture above of Alissa Bertsch Johnson, a campus minister at Washington State University, is from the United Methodist News Service.

He has made more than 20 trips to that region as a journalist, during which he covered such events as Anwar Sadat’s 1977 trip to Jerusalem, and the 2006 Palestinian legislative election. He has interviewed, and written about, journalists, religious leaders, political leaders and private citizens in the region. Jim served for two years on active duty in the US Air Force, and three additional years in the USAF (inactive) reserve. His website: Wall Writings. View all posts by James Wall. 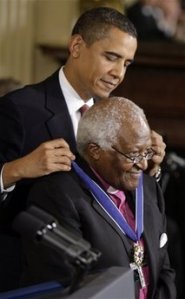 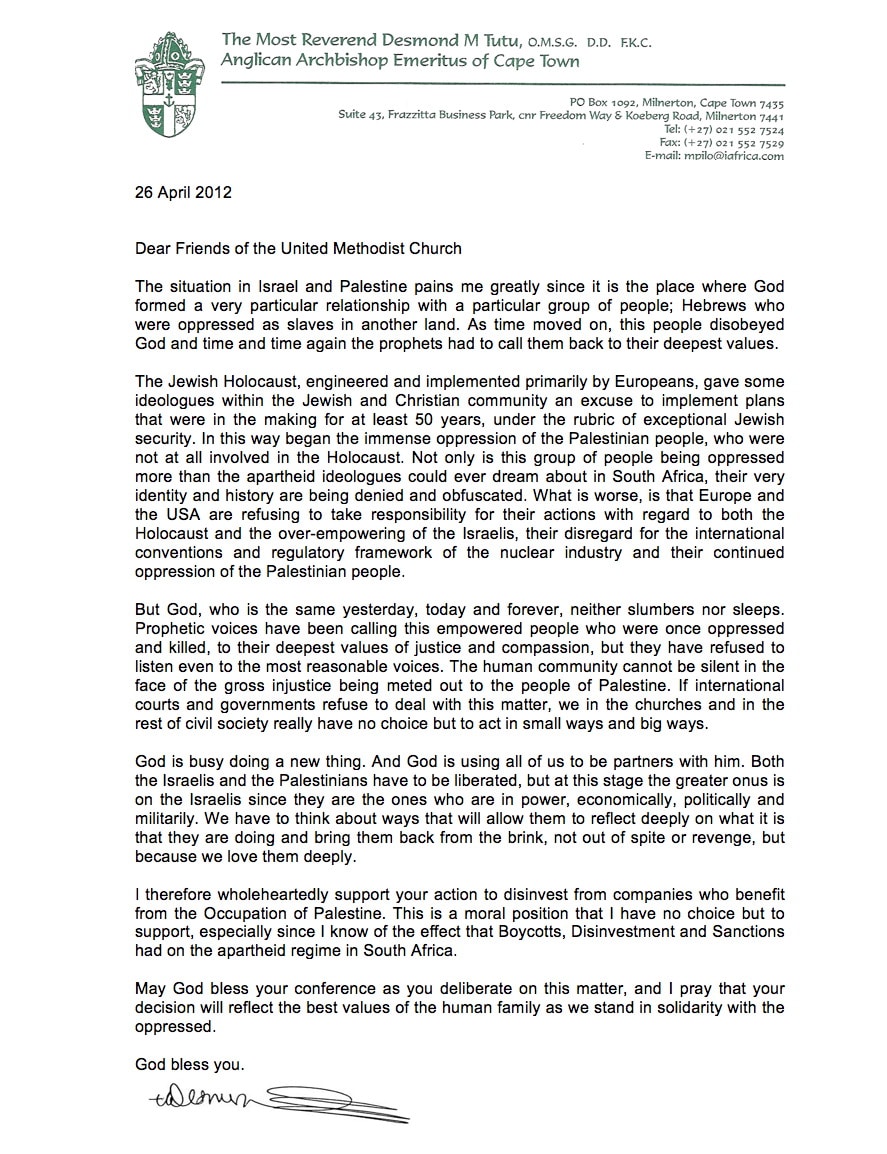